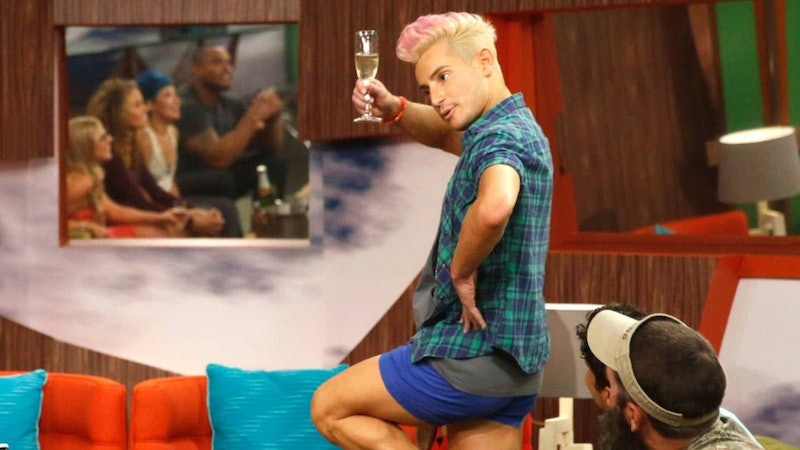 I have followed reality television for a long time. I've watched Big Brother religiously since Season 6. I have not seen every single season, but I would say that my knowledge of the last 10 seasons can constitute me as a superfan. I follow the blogs, I have the live feeds, I have invested many hours into Big Brother, and this season is no exception. So when a fellow superfan is cast on Big Brother and becomes a houseguest, it feels like CBS has done something right for the non-televised superfans. Derrick, Nicole, and even Donny, along with a few others, have proved that they have watched and studied the show, making it enjoyable for the fans to watch. But let me just say: Frankie Grande is not a superfan.

When Derrick talked about Dan Gheesling, or Nicole and Christine predicted what Veto competitions were still left to play, I felt a sense of pride that one of my own (a fan of the show) was inside the house playing. Frankie has assured America that he too is a superfan of the show, but that's clearly not the case, unless "superfan" is defined by: Read all Wikipedia articles on past seasons before going inside the Big Brother house. Because in that case, he's a superfan.

And even if Frankie hadn't revealed the level of his superfandom, it is pretty obvious that he doesn't know too much about the show with certain comments he has made throughout the season.

WRONG. Just wrong. Any "superfan" would know that Janelle is one of the fiercest competitors to ever play the game, and you don't really get to be known as that from getting evicted before the halfway mark. Janelle has been on Big Brother three times, in two of those seasons she came in third place.

Shelly was a very known houseguest who placed sixth on Season 13 of Big Brother.

Even the Wikipedia synopsis should have taught Frankie that McCrae is his first name.

Regardless, Frankie used his HOH tweets to remind us that he is a huge fan.