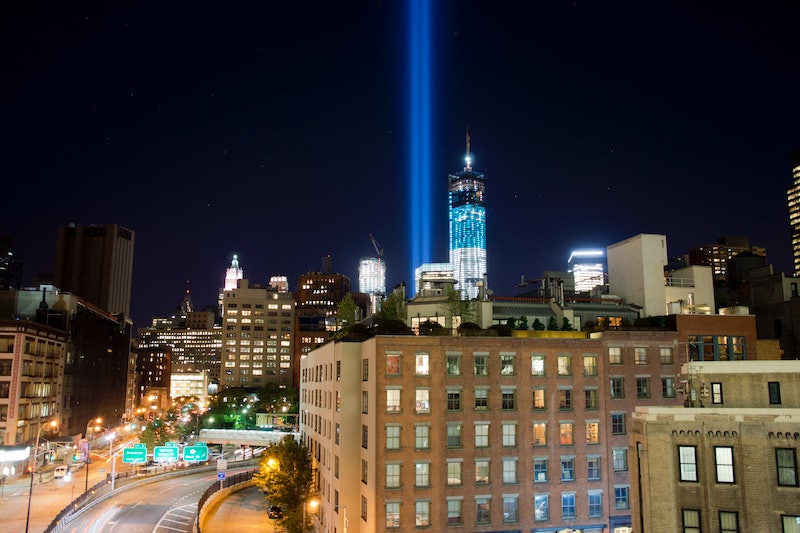 I’ve wanted to move to New York City for as long as I can remember. It wasn’t just the type of thing that one puts on her bucket list, a place to visit once or twice in my life — it was the only city that I strongly felt would suit me for a home. Granted, I had only been to the city a handful of times before I moved here, but I had seen enough movies to prove my assumptions, and as we all know, movies don’t lie.

Yes, the city life was the only life for me, and nothing could stand in the way of that. Not even the tragedies of September 11th, 2001.

I was in college when the first tower fell. I had heard reports that morning that the North Tower of the World Trade Center had been hit, but at the time, with the South Tower still untouched, I assumed it was just a horrific accident.

By the time I reached campus, the South Tower had also been hit, and it was clear that the United States was under attack. We all gathered around the television in the English Department watching CNN in utter disbelief. As with everyone who’s old enough to remember that day, I’ll never forget exactly where I was that morning. It will be ingrained in my memory for the rest of my life: the first photos and videos, shown over and over again, and the fear and confusion that followed in the coming weeks.

I saw that what I had once deemed scary was actually a place where if you messed with a New Yorker, the entire city had your back. How could someone not want to move to place like that?

What struck me most of all were the images of the resilience of New Yorkers; the stories that came out of the tragedy of utter fearlessness and acts of bravery were both inspirational and hopeful. I was touched that a city often portrayed as cold and heartless was actually proving that it and its people were anything but.

New York City really is the capital of the world, I thought. I was more determined than ever to move after college.

But both my friends and family hoped that in the wake of 9/11 I would be deterred. As born and raised Bostonians, my parents didn't see what was so wonderful about New York City. What? Are you going to become a Yankees fan? Maybe even a date a Yankees fan, too? Not really, but I did have high hopes to finally be me, even if that “me” was someone they had yet to meet, because I had kept her under wraps.

I had wanted to attend to New York University back in high school, but when I graduated, I just hadn't been ready to go. I was, admittedly, scared of the city, even if I found that scariness exciting to some degree.

As college ended, I was determined to get over my fear of the unknown that had prevented me from going to NYU. Seeing New Yorkers' response to 9/11 only gave me courage. I saw that what I had once deemed scary was actually a place where if you messed with a New Yorker, the entire city had your back. How could someone not want to move to place like that?

I moved to New York City a little over a year later.

From where my bedroom window is in the East Village, I would have been able to see the World Trade Center towers. Instead, I see the two lights representing the fallen towers beaming up into the sky next to One World Trade Center every year at this time, for a few nights in a row. Even after a decade here, those lights still give me chills, and they probably always will. They are the symbol of not just loss, but survival. They represent the thousands killed that day, but also an aftermath that brought us together. That’s the thing with tragedies; for all the damage they do, the human aspect that ascends from it all is spectacular to witness.

New York City is the greatest love of my life. It is a place where I have grown, evolved, loved, lost, and had my sense of reality challenged. I have defended its honor to those who don’t understand time and time again, and I always will. I often struggle with why I stay here, but I struggle even more with the idea of leaving it.

Sometimes, it’s the last place on earth I want to be. But all I have to do is walk down the street, hear half a dozen different languages in less than three blocks, grab a slice of pizza, and I’m back in love again. I’m not alone in this devotion; everyone I know who lives here, whether they come from some place else or have been brought up on these streets, feels the same way. There must be something in the water.

The fact that I made New York City my home is still my proudest achievement. I feel that pride today, and every day I live here. All of us New Yorkers should.