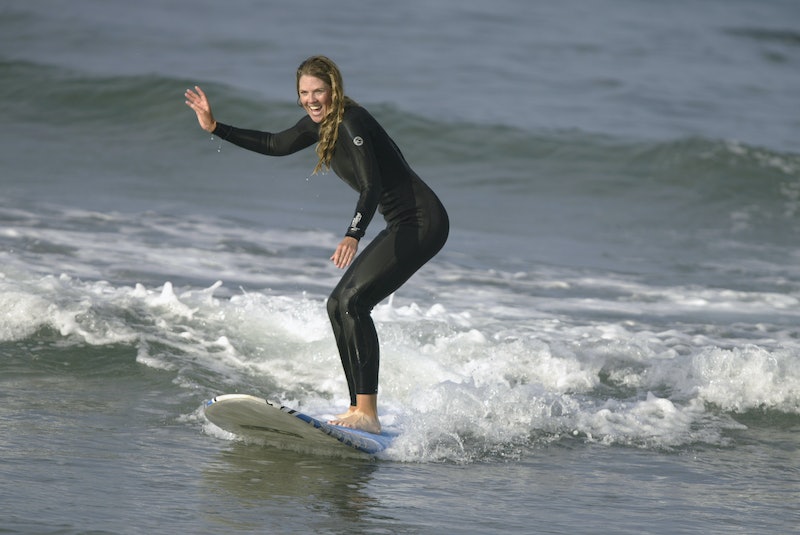 Approximately two hours north of Mexico is a small town known as Encinitas, California. It is place that prides itself on burritos, eco-friendly SUVs, Blink 182, and a close-knit community. With a personal aesthetic lodged somewhere between Venice Beach and The Cape, Encinitas is a town that is neither edgy nor basic.

It is a place of seeming contradictions: Sure, everyone kind of looks like a JCrew model, and if you don’t shop at the farmer’s market at least once a week, you would probably be considered a monster. There’s a rugged taco shop on every corner ... right next to a Starbucks. Everyone rides their bikes ... but they also probably own a BMW. If you’re new to town, it might feel like you don’t belong for awhile, but don’t worry. All you have to do is throw on a boho tank top, profess your love for Mother Earth and Cholula hot sauce, and you will be one of us!

If you were born and raised in Encinitas, you know what I'm talking about, and are fiercely loyal to our town. Because there are some things only we natives can truly understand. Things like...

you know that Surf PE class is a thing

Running the mile and volleyball are for other parts of the country that aren’t as cool or progressive as Encinitas.

Your neighbors are Buddhists who also own Porsches

Other juxtapositions: Women wearing dresses made out of 30 year-old Guns and Roses t-shirts while toting a Michael Kors bag.

You’ve run into at least five exes at The Saloon

It’s the place to be if you feel like having an existential crisis while sweating out your PBR.

You’ve done acid in the Mushroom Caves, or know someone who has

And it was so. Real.

you know that Flashbacks has all the best Halloween outfits

You've made out at the AMC

Although it’s now a Staples, AMC used to be THE place to be on a Friday night if you were in high-school. The seats smelled like moldy bread, but you didn't care.

Or your friends tried to drag to. I mean...he is like the essence of every beach town, after all.

Fun fact: In high-school, I went to a garage party with Emily Ratajkowski and she’s pretty much the person you think she would be in real life. Flawless, emotionally aloof, quintessentially unapproachable, and aesthetically enviable.

you shop at Free People

Where else could you find a tattered tye-dye tank with asymmetrical sequins and a fringe?

You studied for the SATs at D Street beach

And then your parents probably forced you to take the Princeton Review SAT course because life isn’t fair.

You always know where to grab a breakfast burrito

You always make sure to stop at Roberto's or Raul's for a killer morning breakfast.

but you miss Jamrock

Jamrock, our area's only Caribbean cuisine, is now closed. But when it was alive and well, you could order Jamaican patties with a bottle of Red Stripe and life was so, so good.

You've had a crush on someone who worked at E-Street

An educated man who can manipulate foam and espresso? Dream boyfriend.

and have spent way too much money at Lou’s Records

In high school, back when Lou’s took up two buildings, you pretty much accrued your entire CD and album collection from their used stockpile. Then you'd go smoke a joint in your car while listening to Kid A.

And your gifts were always unique and on point.

She will not hesitate telling you your pile of clothing is generic garbage.

Or at least, everyone refers to him as Mick Jagger. He’s tried to convince you that an alien flying saucer is humanity’s only hope. No one has blessed you with finer wisdom than Mick Jagger.

you've done hot yoga ... even though it's hot outside

And the energy was always so beautiful and so sweaty.

You've been to the Self-Realization Gardens

Everyone says they’re visiting the Self-Realization gardens to get in touch with their spiritual self, but really, people just want to take artsy selfies with koi fish ponds and exorcise their hangovers.

as a teen, you probably had a job at LCG

La Costa Glen is a super fancy retirement home that maximizes profits by only hiring 16 year-old servers who don’t care that they’re only making minimum wage with no tips. You get free meatloaf and acquire like 40 new grandmas and grandpas, so it’s not the worst thing that could happen to you.

You own at least one Rastafarian bracelet

Even though the only thing you know about Irie life was Bob Marley and weed.

Because it's a motto one profoundly can believe in.

You own an Encinitas Surfboard hoodie

You were no one in high school unless you owned an Encinitas Surfboard or Mammoth hoodie (you ideally owned both).

Because it’s SO GOOD.

He is a local, after all.

you've ended up at Filiberto’s at 2am

and most of all, you know there's just no place like home