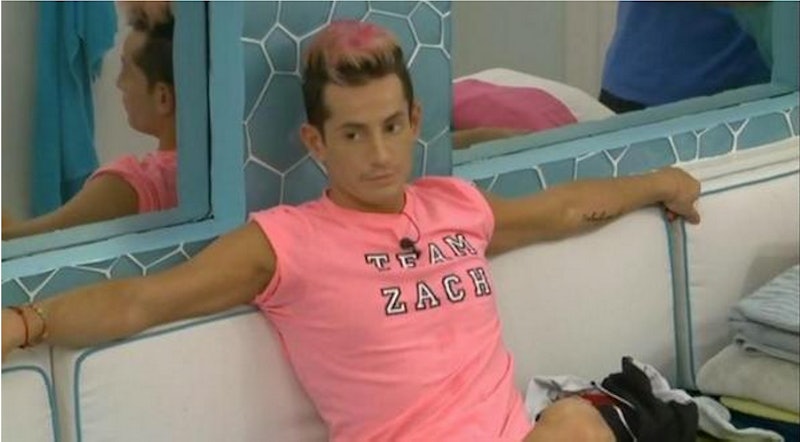 As many Big Brother fans have been pointing out, you know the Final Five is boring when production has to bring in a special twist, a dog, and multiple past players just to make each episode worth watching. We all know this season's best Big Brother houseguests are sitting in jury right now... which is probably why the show let them all come back and play a luxury competition this week. More screen time for fan favorites like Donny and Nicole is always appreciated — but what I really want to know is how did Zankie react to seeing each other again? I need deets.

When the Jury members were first allowed back in the house, the remaining competitors were all sequestered in another room (as they are whenever production sets up the backyard for a competition). According to Big Brother Daily, the houseguests were able to watch all the evicted players reenter the house, but they couldn't make any contact with them until the competition began. That was probably a good thing, since all the jury members started doing their best impressions of human tornadoes and immediately began trashing the house. Zach threw Victoria's clothes everywhere, then danced on a table and tossed fruit loops all over the living room. Thatta boy, Zach. I swear, Kelloggs should give him an endorsement deal. Those two minutes were more entertaining than anything that's happened in the past week.

Big Brother doesn't air competitions on the live streams, so we'll have to wait until they broadcast it to find out how the jury reacted to seeing everyone again. We do know that the houseguests were each partnered with a jury member to compete in the luxury comp, and Frankie played with Zach. I just hope our boys had a chance to rekindle their relationship. Because as you may remember, things weren't exactly peachy in Zankie-land by the time Zach left.

Frankie tried multiple times to get Zach evicted, saying Zach's antics were bad for his game. Even though, in his exit interview, Zach told Julie Chen he blames himself for their fallout, it's logical to assume Zankie is done for good. However, Zach also has a huge amount of love for the game and after having time to cool off in the jury house, he probably came to realize that Frankie did what he had to do to save his own Big Brother life, and there will be no hard feelings. Even in the midst of their worst fight, Zach made sure to clarify how he felt, saying, "I love you as a person. And now I hate you as a game player."

So I predict that though their reunion will probably start off pretty awkwardly, before long they'll be best friends again. Come on guys, I'm rooting for you. Surely the best Big Brother cuddle buddies of all time can't stay mad at each other for long. You have so much to live for!