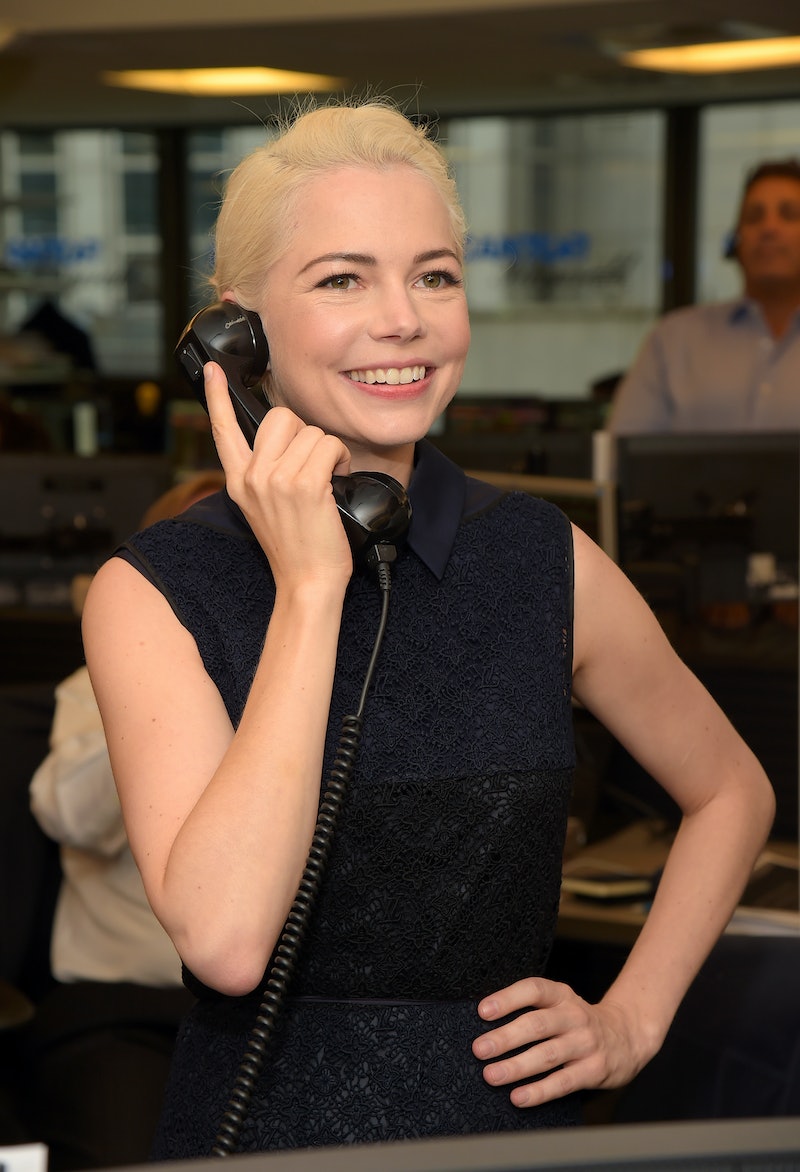 It's easy to complain about celebrities being overexposed, when no matter where you live or what you read, chances are you've heard something about Justin Bieber or Miley Cyrus in the last few days. Yet while there are plenty of stars who could use a long a break from the media, many others seem to fade from the spotlight whenever they don't have a movie to promote. For every Ariana Grande or Kanye West headline this year, there's been a major absence of news involving celebrities like Anne Hathaway, Ryan Gosling (well, until recently) — or Michelle Williams, who, despite being a major, acclaimed movie star, has been pretty much M.I.A. for all of 2014.

While Williams, a very private person, has certainly never been accused of getting too much press, her antics this year — or lack thereof — have taken that mystery to a whole new level. She hasn't appeared in any movies or stirred up any controversy, and now that the #NoKidsPolicy is in effect with most magazines, the once-frequent paparazzi photos of her with her daughter, Matilda, are no longer published. While I'm sure the actress is appreciating her low-key life, her fans have been missing out; after all, what's Hollywood without Williams, a three-time Oscar nominee and one of the most talented actors today? Thankfully, though, it seems that she hasn't spent the last 12 months bingeing on Netflix and twiddling her thumbs; here's what Williams has been up to this year:

And Getting Snubbed for a Tony

It's unlikely, but there's still a chance that there will be a Michelle Williams movie coming out in 2014. The actress' Suite Francaise , a World War II-set romance about a French villager and a German soldier, was filmed last summer and is supposed to be released sometime later this year, although no date is currently set. The reason for the holdup is unclear; along with Williams, the drama stars Kristin Scott Thomas and Margot Robbie, so studios should be clamoring to get it in theaters.

Last July, Williams became the face of Louis Vuitton, starring in a series of gorgeous images promoting the luxury retailer. Since then, she hasn't taken her duties lightly, appearing at parties for the brand, posing for photographs carrying their accessories, and, presumably, counting all the money she's making every time she says the word "Vuitton."

Breaking Up With Her Boyfriend

No, it wasn't Jason Segel, although I'm still mourning the end of that relationship, thank you very much. For over a year, Williams had been dating artist Dustin Yellin, but in May, the couple broke up. Since then, she hasn't been spotted with anyone. Supposedly, the main reason why she broke up with Segel was his necessity of being in L.A. for How I Met Your Mother. How I Met Your Mother is over. You see where I'm going with this?

More like this
Maisie Williams & Reuben Selby Are Fighting Climate Change In Matching Outfits
By Aoife Hanna and Rachel Mantock
Shocked Fans & Former Co-Stars React To Ray Liotta’s Death At 67
By Grace Wehniainen
'Stranger Things' Star Joe Keery Is Dating An "Indie Scream Queen"
By S. Atkinson and Grace Wehniainen
Laura Dern Said “Cultural Awareness” Made Her Rethink This 'Jurassic Park' Fact
By Grace Wehniainen
Get Even More From Bustle — Sign Up For The Newsletter