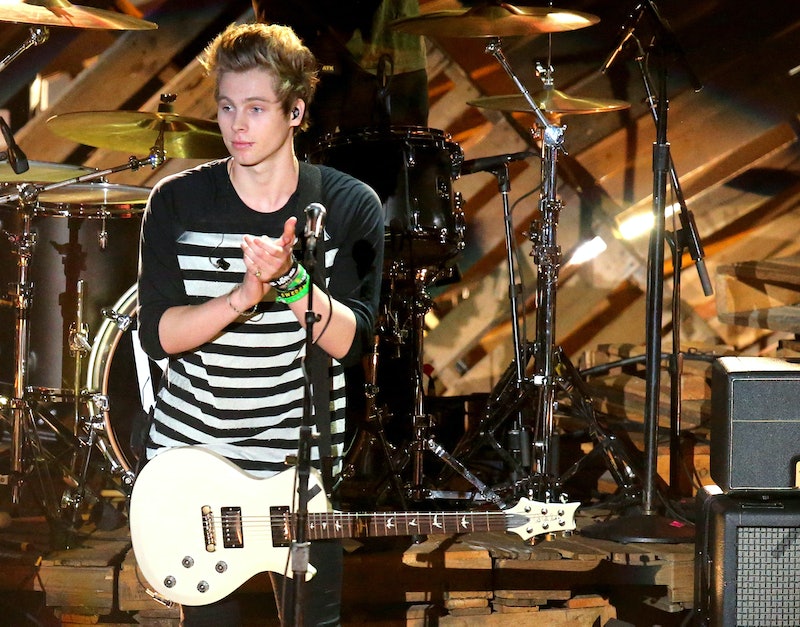 To say that Australian pop-punk-rock-whatever band 5 Seconds of Summer is blowing up right now would be the understatement of the year. If you haven't heard of them, you either 1.) live under a rock, 2.) thought they were One Direction this whole time, or 3.) didn't realize that their hit song, "She Looks So Perfect," was in fact a song, and not a radio commercial for American Apparel underwear. Easy mistake. Regardless, it's time to get acquainted because besides having some incredibly catchy hits on their hands and being goofily adorable, the band's über talented lead singer Luke Hemmings, 18, is kind of a dreamboat. Like an on-his-way-to-becoming-Harry-Styles kind of dreamboat. Is Luke Hemmings single, though? It seems so, but his relationship status hasn't always been so clear.

In March the band put themselves on lockdown by enacting what has been referred to as a "girlfriend ban" since they were crazy busy becoming a massive success and all, but it seems maybe Hemmings was not a part of that. He reportedly had a girlfriend named Aleisha McDonald. What the heart wants, the heart wants, bandmates be damned. The details are a bit fuzzy on the McDonald-Hemmings relationship, but they'd been dating at least since September 2013 because a YouTube video was posted at that time of the two singing together.

It's also unclear exactly when they broke up. When 5SOS spoke about their views on girlfriends in March 2014, band member Aston Irwin said, "We don't want a girl in every city. We really want to make something of ourselves so we’re very focused on the band for now," and Hemmings chimed in saying, "I don’t think you need a girlfriend or an arrangement." Um... so maybe he and McDonald had already broken up? Or maybe this is just a case of two young loves not being on the same page at the same time.

McDonald is a fellow Australian and is also a singer who records song which she posts to YouTube. Many fans speculated that McDonald wasn't over Hemmings thanks to some vague-but-romantic subtweets she put out into the Twittersphere. The fact that these tweets came in the summer of 2014 could be a sign that the breakup was fairly recent.

Can you feel the angst?! Hemmings sure did, because he tweeted a lil cartoon about clingy girlfriends two days later.

Since that little social media kerfuffle, Hemmings seems to be single and ready to (possibly, as long as the "girlfriend ban" is over) mingle. Maybe if his band wasn't so insanely popular we'd be seeing more of him on the prowl? Ah, well. Here's hoping he starts dating a member of Fifth Harmony soon and they take over the world with their pop superstardom, JT and Britney style.

More like this
Love Of Huns' Definitive Guide To A Seminal BRIT Awards Moment
By El Hunt
Is Megan Fox Pregnant? MGK Gave A Shout-Out To Their “Unborn Child” Onstage
By Hugh McIntyre
Britney Spears Set A Wedding Date With Fiancé Sam Asghari & Previewed Her Dress
By Bustle Editors
The 1st Photo Of Priyanka & Nick's' Baby Comes After 100 Days In The Hospital
By Jake Viswanath and Hugh McIntyre
Get Even More From Bustle — Sign Up For The Newsletter