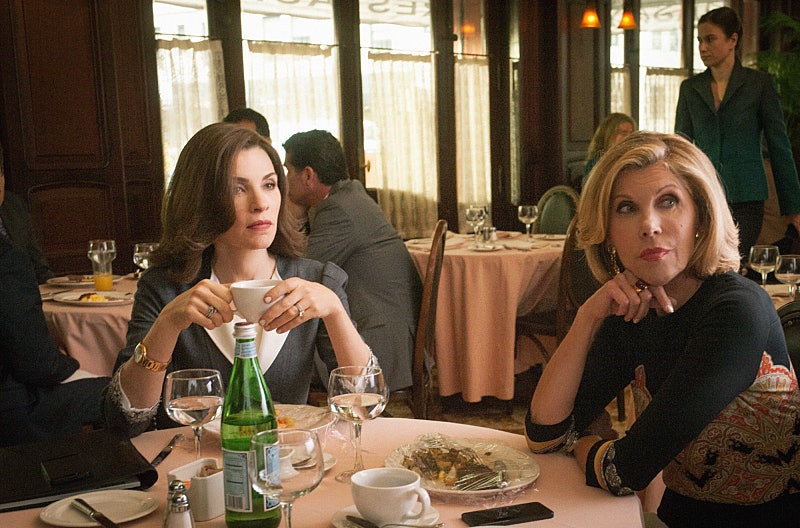 The death of Will Gardner (which I'm still not over, by the way) continued to resonate throughout the second half of The Good Wife's stellar fifth season, as evidenced by the power struggle Diane Lockhart found herself in the midst of during the finale. In the course of that hour, she fought for control of her own firm, as the conniving Louis Canning attempted to force her out. Her proposed solution? Jump ship to join their competitors, Florrick/Agos. Whether or not Diane will actually join Florrick/Agos on The Good Wife was one of the big cliffhangers going into the highly-anticipated Season 6.

Well, in an interview with TVLine, showrunners Robert and Michelle King teased that, in Will's absence, Diane is about to become a new woman:

This is a woman who had the worst tragedy happen to her, which is to have her best friend and business partner die, and Diane doesn’t curl up in a ball and fade away. She starts honoring Will by picking up some of his personality, some of his gambling instincts, and it makes her, in many ways, younger.

As Diane embraces her new youthful energy, she might find herself drawn to the untapped potential of a new firm:

There was a moment when she and Will entered Florrick-Agos for the first time, this old t-shirt factory, and it made Diane nostalgic for starting over again, for the energy of a startup. When you have everything taken away from you, there can be an excitement about starting over again.

But how far will that excitement take her? If she does indeed abandon her own namesake law firm to join Alicia and Cary, will she able to operate as an equal partner? Or will her vast wealth of experience make her feel qualified to perhaps take on a higher percentage of the power? Sure, Diane joining Florrick/Agos sounds like a great idea, but this is television, so the transition is unlikely to go smoothly.

While Florrick/Agos had already been talking with Lockhart/Gardner about a possible merger, Diane leaving LG for FA is a different matter entirely... and it's not quite clear how Alicia is going to feel about it. She was fine with the idea of the two firms joining, since all the lawyers would have the room and resources to maneuver in a large pond. But Diane joining by herself will make her a very big fish in a very small pond — will Alicia feel threatened by her mentor encroaching on her territory?

Lest you forget, come Season 6 Alicia will already be dealing with another potentially life-changing transition: Will she or will she not leave Florrick/Agos to run for State's Attorney, per Eli's request? It will be interesting to see how Diane's move will affect Alicia's decision. You would think she be more comfortable leaving her firm behind if she knows someone as capable as Diane is running it... but knowing the Good Wife writers, Alicia's emotions on the subject will undoubtedly be more complicated than that.

There's no doubt that Diane knows how to run a firm — but she knows how to run a firm her way. Does Alicia trust her enough to leave her baby in Diane's hands, with only the relatively inexperienced Cary to challenge her? What if Diane starts steering Florrick/Agos in a direction Alicia is uncomfortable with? Would she abandon her SA race to go back and save her firm? So many questions! So much juicy drama ahead, and if Season 5 was any indication, the Kings have another thrilling 22 episodes for Season 6 in store for us.

The relationship between Diane and Alicia, two very strong and ambitious women, has long been one of the best parts of The Good Wife — it's been fascinating watching them toe the line over the years between mentorship, friendship, and occasional hostility. And while I would certainly never champion the idea of them being outright enemies, the prospect of increased drama in the interactions is certainly something to look forward to when The Good Wife's Season 6 premieres.

More like this
Twitter Got *Very* Emotional Over 'The Split’s “Perfect” Finale
By Sam Ramsden
'This Is Us' Included A Heartbreaking Easter Egg About Jack's Death
By Grace Wehniainen
Twitter Is In A Frenzy Over 'Derry Girls' Romantic Plot Twist
By Nola Ojomu
The Time Traveler’s Wife Book Has A Heartbreaking Ending
By K.W. Colyard
Get Even More From Bustle — Sign Up For The Newsletter