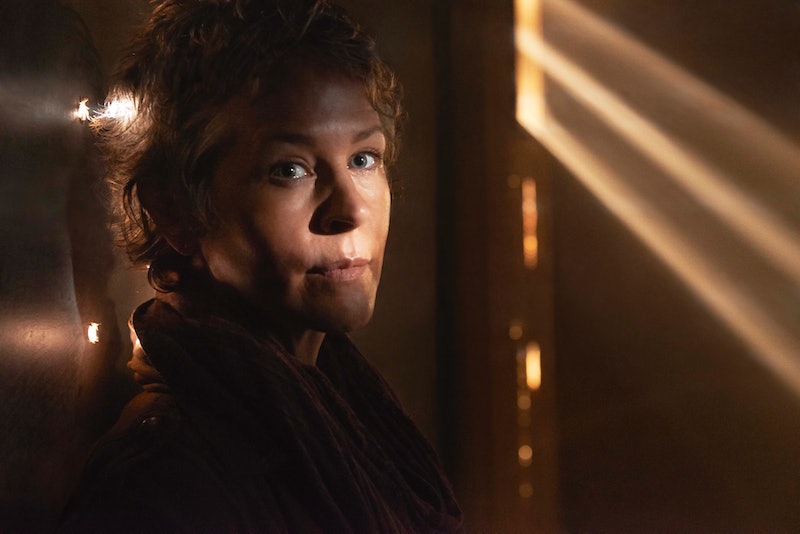 Happy fall to us all, and to all a good fall! One of the best things about Fall TV, if you follow spoilers closely like I do, is that once shows get up and running again, we can ditch the cliffhangers and start moving onto long-term goals for our favorite characters. The Walking Dead Season 5 premieres on AMC on Oct. 12, but the buzz on the streets is already centered around Oct. 19, Season 5's second episode. According to a set report from SFX Magazine, the episode will feature the return of Carol. I seem to remember her being banished like a post-apocalyptic Romeo, so that's interesting. SFX also reports that we'll likely meet the already infamous Father Gabriel in that same episode.

A young African American man wearing the white collar and black shirt. From out of the forest tears what at first looks like a platoon of infantrymen. But as the brush clears, their faces grow familiar- Rick, his son Carl, Daryl, Maggie, Glenn, Michonne, Carol...

With Beth still out of the picture for the time being, will Carol and Daryl hook up as lovers? Will they... hang out as friends? She has to find him first and face her crimes. Though, while I am one of the "Richonne" shippers, generally speaking the apocalypse is not a good time for kissing. Looking at you, Divergent! I just think Rick and Michonne are a good team and sometimes I worry about Carl. Sometimes.

As for Terminus? Terminus is old news. It's over!

I kid. Terminus is far from over. However, from a story-telling perspective, it doesn't seem likely that we will see Carol and Tyreese (and Judith — can't forget about baby Judith) gaze longingly at a Terminus sign and continue towards it. We saw so much of that last season that it has become its own cliché. Unless it's used as a sick kind of juxtaposition, I think it's more likely that they'll run into the regulars on the road to Washington, D.C. Most likely during a Walker attack — either the one teased by the set report or an earlier one. Oh, those Walkers. They're so good at bringing us together. I'm also going to guess that "Little Ass Kicker" is Carol's way back into the group. After that train car, Rick may be willing to forgive anyone after seeing his daughter again.

Remember last season in "The Grove" when Team Tyreese saw a distant fire? I wonder if it's connected to the burning that has been spotted on set. That might figure into why Carol, Tyreese, and the babe haven't made it to Terminus as quickly as the others. Not only did they have to pause and re-enact Of Mice and Men with Lizzie, that smoke stack was a pretty ominous message to stay away.

The Walking Dead producers and cast, including Melissa McBride, talked to Variety at San Diego Comic Con, teasing her character's growth and whereabouts. McBride had this to say:

One of the benefits of this kind of television series and this type of storytelling — taking your time with it and having the long-range view — is you get to really explore these characters; you have time for them to learn and grow and make mistakes.

Recently, a press release for fifth the season asked the question "After all they’ve seen, all they’ve done, all they’ve sacrificed, lost, and held on to no matter what the cost... Who do they become?" Looks like Michonne isn't the only one in for some character development. I love what this cryptic message means for these characters, including Carol. We have seen the change Carol has been through, both before and after the outbreak. It'll be interesting to see where they take her next.