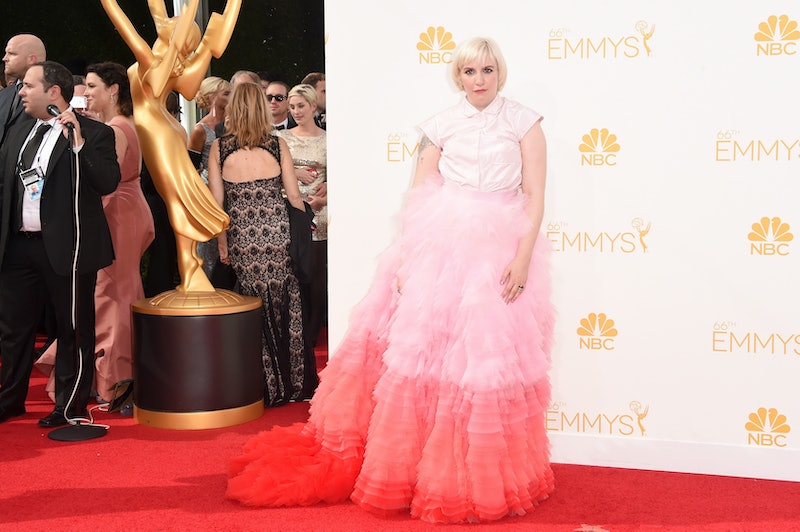 She's everywhere and we can't stop it—Lena Dunham has a new, new project (not long after the announcement that she's making a documentary about a Brooklyn tailor making clothes for a transgender clientele). On Tuesday, Dunham debuted her Youtube series "Ask Lena," tied to the release of Lena Dunham's forthcoming book, Not That Kind of Girl. In the videos, Dunham answers questions from readers in a pretty-cute illustrated setting. She is not unlike a little cartoon with her platinum hair and puppy sidekick. The best of the bunch is probably the first in the series, where Lena answers a question from a fan: "Am I bad feminist if I dress provocatively?" In short, Lena answers, "Feminism is about the freedom to make choices, so dress however you want." Pretty good answer.

I've certainly had my problems with Dunham in the past, largely for her ignorance of diversity on HBO's Girls, which has had its fair share of criticism and parodies like this priceless one from Sasheer Zamata. But I have to begrudgingly admit that while I might not relate to Dunham personally — in terms of life experience, we differ about 90 percent — her Ask Lena series is a good resource for her fans to connect with her personally. And though I haven't watched the rest of the videos (there are so many! more each time I refresh the page!), I assume her advice is helpful, sincere and touching to her fans that want to reach out to her. Like I said, my relationship with Dunham is problematic, but she's still a voice that speaks to a lot of girls and women; I'm glad she's no longer referred to as the voice of a generation, though, which was alienating for me and for many of my friends who are women of color.

But, like I said, her answer about feminism is pretty satisfactory—it's about freedom of choice. Do I wish that she was more inclusive in her feminism, because she resources to reach such a wide audience? Sure. But "Ask Lena" is helpful and a good resource for her fans, and for us WOC, we have Beyoncé.