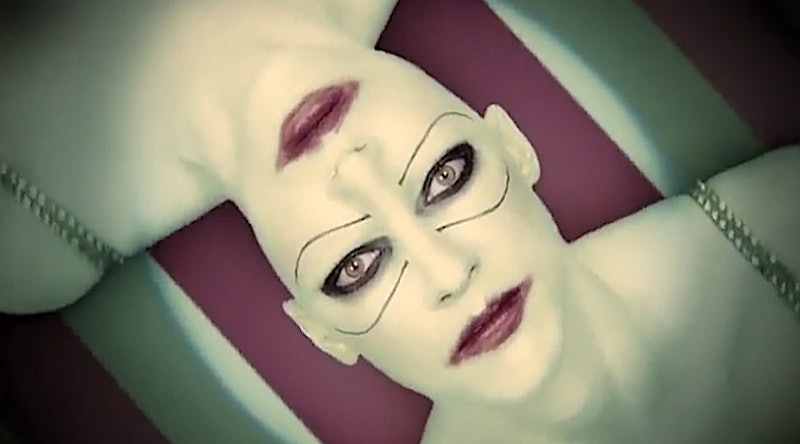 The season hasn't even started yet and already FX's American Horror Story: Freak Show has given fans a number of terrifying things to talk about. (BRB, hiding under my bed until forever.) Speaking of numbers, has anyone else noticed the numerical significance in all of these AHS: Freak Show teasers? So far we've seen characters with not one, but TWO upper bodies (thus bringing a whole new meaning to the term "I've got your back). Then there's the numerous nods to three-legged performers, including a contortionist who would put all yoga instructors to shame. And, of course, who could forget Sarah Paulson's Bette and Dot debut in the official Freak Show trailer, proving once and for all that two heads really are better than one — especially when they're connected to the same body.

Is this Ryan Murphy's way of highlighting one of the main contributors of being considered a "freak?" Perhaps your status as an outcast is directly proportional to the number of limbs you have? And the more you have, the freakier you are. If that's the case, it's certainly a point the showrunner is continuing to drive home. The series has released two more teasers into the mix, one showcasing a character with two faces (that's sure to make walking around a very difficult task indeed), and the other featuring another three-legged trapeze artist swinging high above the crowd below.

There's no denying how creepy these images are, mostly because we're just not accustomed to seeing people walking around with extra body parts. But maybe that's the underlying message in this numeric theme. After all, just because we're not used to seeing something shouldn't automatically give us the right to label it as odd or even wrong. Different should not equal freaky. For all we know, these could be extremely nice people whose appearances happen to deviate from society's norm. (Except for the terrifying clown promos, of course. Those things are just pure evil.)

Even the tagline to this season is Wir Sind Alle Freaks, which is the German translation for "we are all freaks." But perhaps the performers aren't the freaks Murphy is referring to. Perhaps "we" as a society are the freaks for judging a two-headed book by its cover.

Check out both new trailers below: