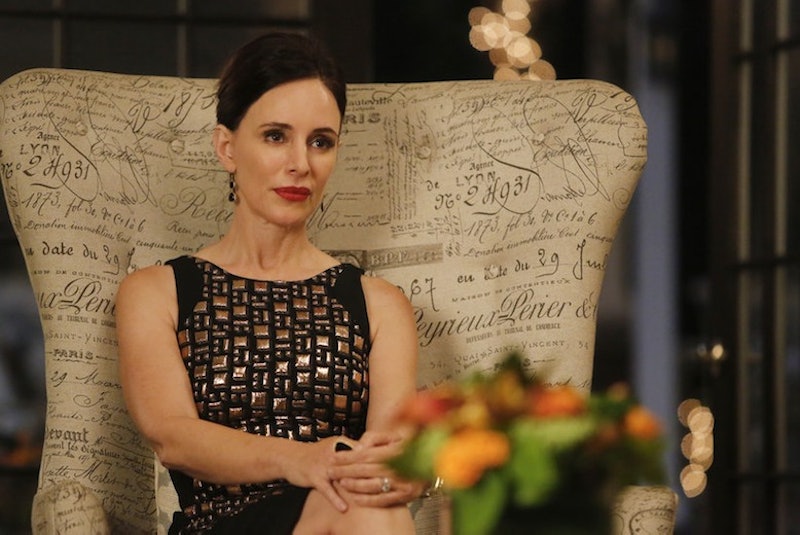 It’s hard to say what exactly fans can expect from Season 4 of Revenge , given the show’s perpetual ability to throw us for a complete and utter loop from one week to the next. I mean, just in the Season 3 finale alone we saw Victoria straight up murder Aiden right before she was shipped off to a mental institution. Meanwhile, Conrad got stabbed (possibly to death) by the man we thought to be dead ever since Day 1. Yup, David Clarke is alive and my brain still has yet to recover from the shock. But what will all of this mean moving forward? Unfortunately, I believe it means death for Victoria Grayson.

That’s right, you heard me. I don’t think this Queen of the Hamptons is making it out of Season 4 alive. Why? Well, right away the fact that Victoria now has her own revengenda automatically shoots her to the top of the danger list — and by that I mean she’s just as much of a danger to herself as she is to her enemies. The act of revenge at its core is not fueled by logic, but from powerful emotions, which makes devious behavior like this a lot more risky.

Just look at all the close calls Emily’s had throughout these past three seasons, and that's even with some pretty hardcore training under her belt. I’m talking like serious martial arts type stuff. So unless Victoria has been taking private karate lessons this entire time, I doubt she’d be able to withstand all the challenges Emily has faced. As stunning at she looks, her age just wouldn’t allow it. That’s not to say that Victoria wouldn’t be good at this whole revenge business. On the contrary, given the way she cunningly went about killing poor Aiden (drugging his tea before suffocating him to death), I’d say she has a downright knack for it.

However, this is a chessboard Emily has been maneuvering for years, so it’s hard to believe Victoria would be able to just come in and upend it all after a few weeks of plotting from a padded room. I mean, Victoria’s good, but I doubt she’s that good.

But, I have to admit, my main reason for doubting her success (and eventual death) is due to the fact that she doesn’t have a partner in crime. Because despite Emily’s initial reluctance to accept assistance for anyone, she would never have gotten nearly as far as she did without the help of her friends. Nolan, Aiden, Jack — they all played some sort of a roll in her red sharpie takedowns. But Victoria, she has no one in her corner anymore. Just look at the potential prospects if you don't believe me…

Whether he’s dead or not, Conrad would never in a million years be considered one of Victoria’s allies, especially now that — thanks to a recently released Season 4 clip — we know Victoria will find out he is the one responsible for Pascal’s death, not Emily. So if anything, he’ll make the top of her hit list, not help list. (That is if he’s still kicking around at this point.)

Given that he just recently stabbed Conrad with a knife, I’m guessing he’s feeling slightly resentful toward the whole Grayson family. He and Victoria may have a steamy history, but odds are he’s not going to be in the mood to help the woman that betrayed him so very deeply. But ya know, that's just a hunch on my part.

It would take a serious falling out with Emily in order for Nolan to switch sides. And even then, I don't think he'd ever betray her like that. Sorry, Vicky, but you're going to have to get your technical support elsewhere.

Nope. Nada. No way. Not going to happen. And I won't insult your intelligence by explaining this further.

Victoria could possibly turn to Daniel for help, but given that he recently woke up with an OD-ed dead girl in his bed, I'd say he has enough on his plate to deal with and just won't have the time for such things. As for Charlotte, I'm guessing her and Emily are going to grow pretty close while Victoria's locked away. Chances are that bridge is pretty much burnt.

Yes, it's safe to say this lady has way more foes than friends nowadays. But whether Victoria ends up completing her vendetta or simply dies trying, odds are her reign of revenge is going to make this year in the Hamptons one we won't soon forget.