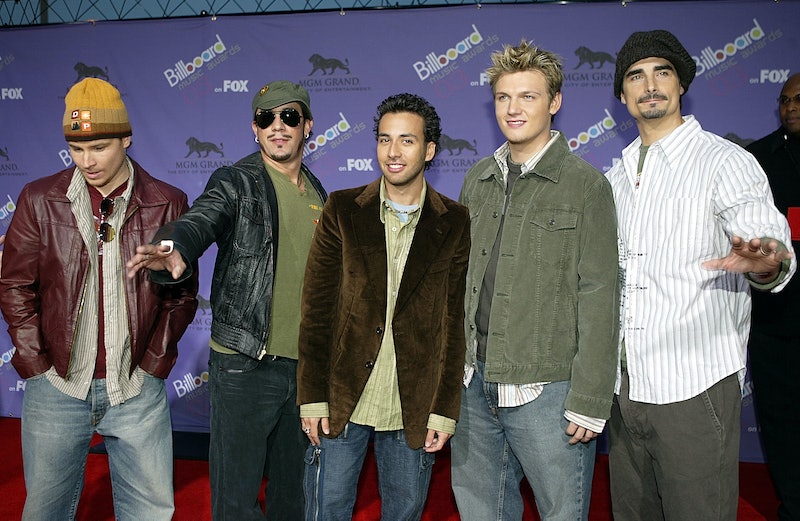 You may not realize it, but you probably already have the perfect costume hiding in your wardrobe. Why not dress up like a ‘90s singer for Halloween? Think about it — when it comes to picking out a Halloween costume, there’s no shortage of options out there, and trying to select just one can be overwhelming. And, while yeah, you could dress up as specific pop stars currently making headlines like Miley Cyrus, Lorde, Taylor Swift, or Ariana Grande, don’t those feel a little predictable to you? Especially when you could bring back such '90s gold as girl power groups, grunge rock, or really any boy band that ever graced the stage.

Also, what if you are on a budget? Or don't have the time to make, create, or search for an outfit that is fantastic? Which brings me back to my original point. There’s no arguing that the ‘90s was an interesting decade for music (Spice Girls, just saying). Instead of trying to replicate a well-known artist (either past or present), why not just dress as your favorite throwback genre to cover all of your bases? It is SO doable, and you probably have most of the items you need lying around at home anyway. If you don't want to take my word for it, look below for a little inspiration to get you started.

Attempting to dress as a boy band member is going to require some serious digging on your behalf at your favorite thrift stores, but trust me — it's going to be worth it. Whether you were an 'N Sync fan or preferred the Backstreet Boys, if you're going to go the boy band route (which you should, because it's hilarious), I suggest two classic looks.

One involves raver inspired pants ($42, Rusty Zipper) paired with a tank top (always a tank top!) and yes, a ski mask ($55, Zappos). Why a ski mask, you ask? Because at least one boy band member in every group had to incorporate some sort of ridiculous accessory into their ensemble to make them stand out from the rest. That's just how boy bands work.

Your other option is more boy band off-duty. For this look, we have some khaki pants (like these from Old Navy for $17), a white tank ($20, Old Navy), and a silk button up to go over the white tank. Silver accessories include a chain with a cross, and diamond studs are a must-have. Oh, and don't forget to go crazy with the hair gel, and for either look try desperately to get your hands on a headset mic. Or, carry an old boom box around with you blasting old '90s hits. Your friends will love it.

Any variations of what you see above can easily lend a nod to the classic '90s grunge "look," but there are a few basics that will really set the tone. Think leather pants ($23, Forever 21), torn jeans, baggy jeans, acid wash anything, and, if available, cut-off shorts with nylons. The more ripped and ruined, the better. Accessories also play a strong role in this look. A bandana, combat boots ($195, Neiman Marcus), and muscle shirt will feel very rocker, whereas a plaid shirt ($27, Old Navy), Converse, and striped or plain tee will play into grunge. Either way, make sure to pile on that black liner, and if lipstick comes into play, smudge it like only Courtney Love would.

Being a '90s pop star only looks easy. This ensemble is obviously inspired by our beloved Spice Girls, but it still speaks generally to all things bubble gum and rainbows. Think baby pinks and blues, slinky little dresses (like this one on the right, $21, New Look), knee high socks ($8, Wet Seal), and fluffy, powdery accessories. Extra points if you are able to score the infamous platform runners made famous by all five Spice Girls ($100, Karma Loop). Anything metallic and flashy would work here, too. And if all else fails, go the school girl uniform route and dress as Ms. Spears.