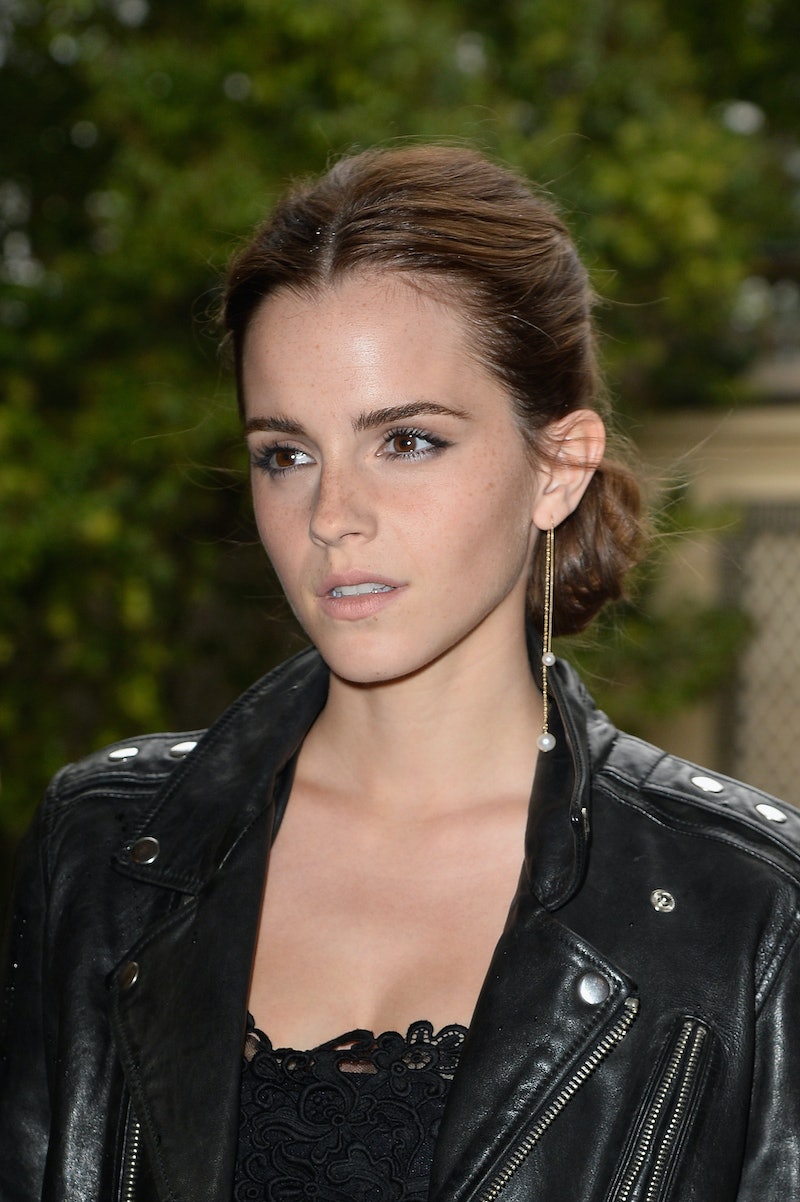 If you've been too engrossed with Keeping Up With The Kardashians or maybe enjoying a period of Twitter abstinence, Emma Watson's UN speech made her The Ultimate Feminist of 2014 when she said things like, "For the record, feminism by definition is: The belief that men and women should have equal rights and opportunities. It is the theory of the political, economic and social equality of the sexes," and encouraging men (as well as women) to stand up for gender equality with a commitment to the hashtag #HeForShe. Emmawatsonpaloozafest is showing no sign of slowing down, and if we were going to be completely obnoxious we'd award infinity points to Griffindor, but instead we're just going to very maturely and gracefully mark this one as a win for women.

Obviously, every woman immediately burned their bras to the soundtrack of Beyoncé's "Flawless," while celebrities took to Twitter in support of Emma. Everyone from Keifer Sutherland to Zooey Deschanel pledged their allegiance to the tiny Brit. Taylor Swift has been the latest to jump on board the Watson kiss-ass parade, on French-Canadian television, while a 15-year-old boy penned a letter in the Sunday Telegraph which might just be the best reaction yet. Here are some of our favorite reactions to Emma Watson's stirring speech on gender equality.

We're not surprised Taylor Swift has been the latest celebrity to stridently declare herself a feminist, given she's been making a decided career shift into "empowering." Her image rebranding is as fabulous as it is necessary, and appearing on French Canadian talk show Tout Le Monde En Parle, Swift said of Watson's speech,

"I wish I was 12 years old and I’d been able to watch a video of my favorite actress explaining in such an intellectual, beautiful, poignant way the definition of feminism because I would have understood it and then earlier on in my life i would have proudly claimed that I was a feminist because I would’ve understood what the word means."

A letter from a 15-year-old boy, Ed Holtom

Ed Holtom, a particularly eloquent 15-year-old boy, got everyone talking when he penned a supportive response letter to Emma Watson's speech that was subsequently published in the Sunday Telegraph (with the full transcript of the abridged letter appearing on Buzzfeed) over the weekend. Holtom wrote such lovely things as:

"If we really want equality we must all make an active decision to abandon phrases such as 'what it means to be masculine' and the like. If we really want equality we must try our best to ignore gender and stop competing with one another. We must stop comparing ourselves to each other, particularly other people of the same gender, because that leaves us with a feeling of insecurity and self-doubt. We must stop pressuring each other to fit with this stereotype which more often than not leaves us feeling repressed and unable to express ourselves. And most of all, if we really want equality, we need to stop caring. Stop caring about gender, stop caring about another person’s sexual preference, stop caring about how far someone fits in with the stereotype and stop caring, most of all, about how much we fit this stereotype, we must not let gender define us."

It's nice to see teenage boys doing things other than jacking off into old socks and playing Nintendo. Thank Ed Holtom for breaking down those toxic traditional stereotypes.

Quite a few male celebrities got on board with Emma Watson by posting sultry selfless of themselves brandishing the #HeForShe slogan. But none was so sultry, and so supportive as that of the gray-eyed Tom Hiddleston, who used both the words "impeccable" and "extraordinary" to describe Emma before literally killing everyone around him with the intense beauty of his steely gaze.

Self-proclaimed feminist many times over, Joseph Gordon-Levitt released one of his HitRecord videos in support of Emma Watson. In a call to arms, he asked fans to define what feminism means to them. In the video, Joe talks about how his mom taught him about feminism, which makes us love him any more. What he learned from his mother is that,

Of course Sandy Cohen would support feminism. OF COURSE HE WOULD.