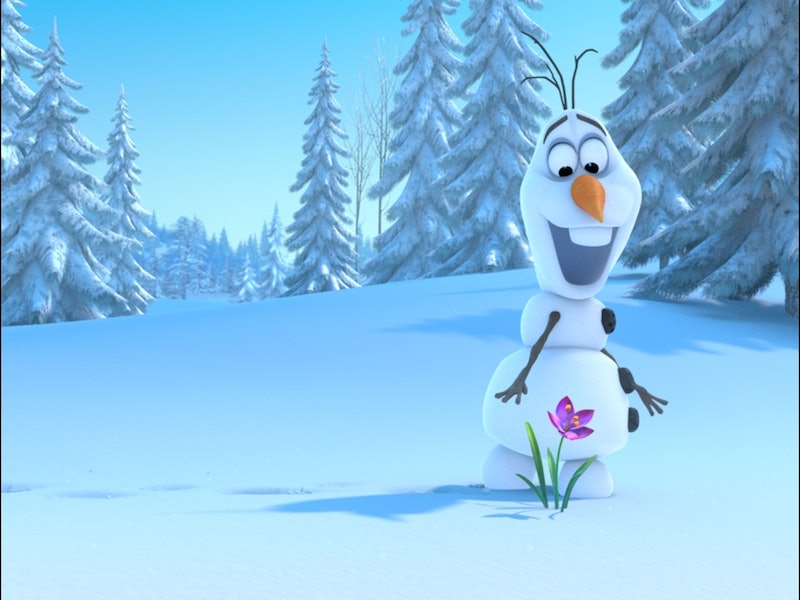 Not so long ago, a certain snowman took the world by (ice)storm, and now everyone's wondering if Olaf will join Once Upon a Time's Frozen arc. Truthfully, OUAT is known for twisting practically everything we’ve ever known about fairy tales, so it wouldn’t be all that surprising if they messed with the Frozen storyline too. So far, there have been no casting rumors for this lovable, huggable summer-lover, but that’s really not to say that he won’t show up. In fact, at this point I’m pretty much expecting it — at least in references.

One thing OUAT's Frozen arc needs is some nods to the film, and my guess is that Olaf will be mentioned a lot. Usually OUAT likes to change the storyline of the original film, but that might not be the case with Frozen. Since Once is starting Anna and Elsa's plot line sometime after the film's happy ending, it's possible everything we know about Frozen thus far is still true. In that case, Olaf still exists somewhere — we just haven't figured out where yet.

Somewhere in between Anna leaving for the Enchanted Forest and Elsa turning up in Storybrooke, Elsa got trapped inside an urn in Rumple's chamber. Rumple described that chamber as the place where he stores magic that is "too strong or too dark," even for him. Did they have some strange misunderstanding or is Elsa really darker than the Dark One? Darkness or not, something landed her in that urn and Olaf had to be somewhere during all of this. I'm not saying we'll see him or ever find out why, but here are some ideas of ways OUAT could use Olaf this season.

He'll Show Up in Animated Flashbacks, Like Grand Pabbie

Grand Pabbie, the Troll King, appeared in the OUAT premiere, attempting to help Elsa come to terms with what her parents might have been searching for. If the creators of OUAT were able to animate Grand Pabbie, why not add more Frozen characters and do the same for Olaf? We already know they plan to bring Prince Hans in later on. Let's face it, there's no way Olaf would let Hans take over their kingdom if Anna and Elsa are trapped in Storybrooke — even if Elsa's not there to keep his personal flurry flurrying. Some people are worth melting for.

He'll Show Up in Storybrooke in Human Form, in Search of Warm Hugs

When the second curse hit after Peter Pan's reign, Dr. Hopper turned back into Jiminy Cricket and vise versa when the crew returned to Storybrooke. Mice and mirrors were turned to men, and so on. So I'm wondering if the same would happen to Olaf. Is it possible that somewhere in Storybrooke there will be a tall, pale man, lonely and confused as to why he actually has a skull and bones?

Okay, this is kind of a long shot but bear with me. In the final moments of the premiere, Elsa finds her sister's wedding medallion already hanging in Gold's shop. How did it get there? Obviously it was already used for the wedding (or no wedding) and somehow ended up in Storybrooke. What if somewhere along the way, Olaf was turned to something else? Like stone — or more likely, ice?

To Our Disappointment, They Won't Use Him At All

We still have no idea if Elsa is a friend or foe. I really want to go ahead and say friend, but who knows. If Elsa truly has a dark history with Rumple, we'll have to assume Elsa did something to interrupt her light magic. It's possible we'll never see Olaf this season if that's the case. That adorable lump of love was obviously made out of light magic.

Elsa Will Create a Storybrooke Olaf to Keep Her Company