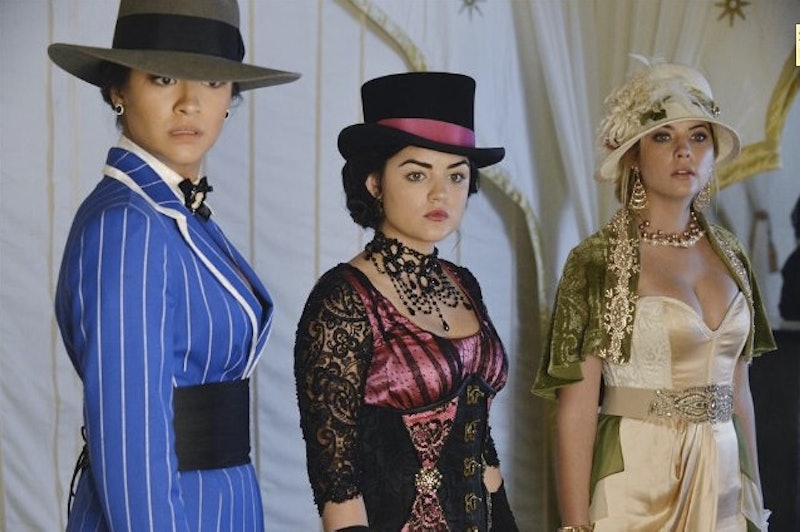 Ah, Pretty Little Liars: how could you forsake us this Halloween season? Tough enough that you left us high and dry after that disturbing mid season finale (seriously, it was almost as traumatizing as seeing Brody get a public execution on Homeland ). But now you take away our PLL Halloween special. I mean, come on: The Halloween special is traditionally the soapiest, most fabulously garbed episode of the year! How can we survive without it?

I guess I'm partially assuaged because this year, we're getting a Christmas special instead, and it looks almost as glamorous as past Halloween episodes, if these Yule Ball-ready gowns are any indication. But still, it's going to be tough to get through the spooky season without my favorite fix. Even if you don't count all of the dramatic resurrections ("Did you miss me, bitches?"), we're still going to be missing out on some of the very best Halloween costumes in the business. I mean, Emily's Barbarella costume? Aria's steampunk fuchsia and black lace Victorian-inspired gown? Those costumes take a lot of effort!

Ah well. There's nothing to do but comfort ourselves with Halloweens past. So with that in mind, here's a definitive ranking of the all the costumes the little liars have ever worn, starting from the bottom:

Emily! Cultural appropriation is a no-no! To be fair, this episode is from a couple of years ago, and I think people have become more aware of the issue since then. Still...

The pinstripes! The fedora! The silhouette! It's like a baseball uniform and a '20s gangster gave birth to a school marm.

Oh, poor Hanna: Looks like the Titanic got off course and hit a craft store instead. Still, props to Ashley Benson for the ability to make pretty much anything look good.

It may be basic, but at least Hanna's got enough attitude to make an absolutely adorable "Hit Me Baby One More Time" Britney.

"Grave New World" was definitely a mixed bag costume-wise, but I think Aria may have made out the best — her steampunk outfit was a lot of fun (and check out that necklace).

4. Spencer as Queen Elizabeth I

That wig might be a little too period-accurate, but you've gotta love Spencer for her commitment!

It's so... it's so sparkly. Also, Lucy Hale kind of has the perfect features to go with that dramatic '20s-inspired makeup.

1. Emily as Barbarella (with an assist from Paige as Marlene Dietrich)

Ah — perhaps the most fabulous couple in the history of ever! Emily's take on Barbarella is appropriately crazy (I mean, silver thigh high boots and a cape?), and I'm loving Paige's Marlene Dietrich-inspired digs.