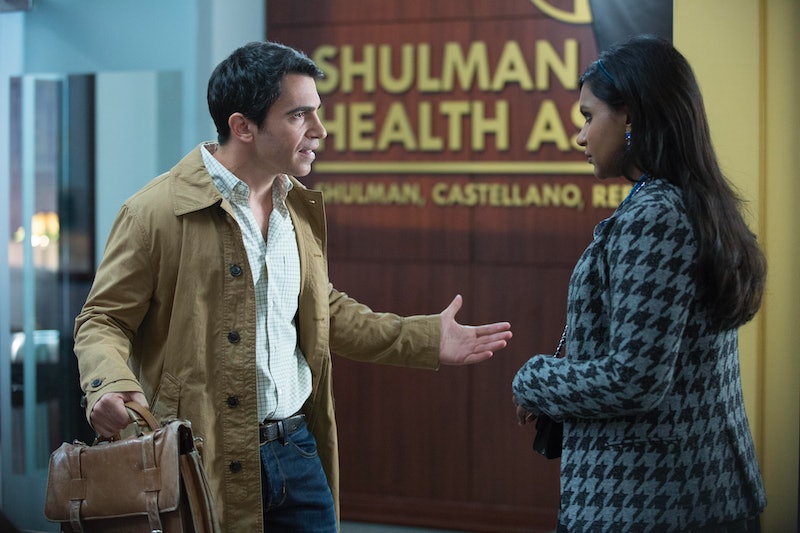 Sure, it's an odd question. Comparing a 2014 leading man on a Fox sitcom to one of the most drawn out beaus from the heyday of The WB. And sure, the short answer to this origin question is "no." Danny Castellano from The Mindy Project and Luke Danes from Gilmore Girls are not the very same. Danny is a yankee doctor who lives in Manhattan, while Luke runs a diner in perhaps the smallest town in Connecticut. But they are most certainly cut from the same cloth; it's stiff, workman blue cloth, unyielding but for a few spunky brunettes.

I, myself, am a spunky redhead and long have I known that I share a "type" with the likes of Mindy Lahiri and Lorelai Gilmore: the Stoic Grumpy Dream Man. The Stoic Grumpy Dream Man is a staple in television, from Sam on Cheers all the way up to Nick on New Girl; but never has he been more the man TV needs him to be than in Luke and Danny. Because a real SGDM rises to the peak of his grumpy charm only through earning the affections of high-spirited, excellently flawed lady heroes such as Lorelai and Mindy via his muttering, tinkering, grumbling nature.

These men aren't perfect: that's kind of their thing. They're counterbalances; they're steadying forces, while Lorelai and Mindy are bolts of energy. Of course, their main difference is that Luke had seven seasons (but let's call it six, shall we?) to prove that he would stand steady through Lorelai's shenanigans, whereas just a little over three seasons in, Danny can still teeter on the edge of "jerkface who's trying to change our modern day comedic anti-heroine." But if those two crazy kids could make it work, Danny might just be wearing a backwards Yankees cap still next to Mindy in a few year's time.

For an SGDM, it's all about the chemistry with one specific person, and a disdain for the rest of the world; and Luke and Danny are charming only with the women they love. (Otherwise, they're kind of asses.) Their slower cadences only stand to make the back and forth — or lack of understanding — with Lorelai and Mindy's non-stop wit and pop culture references that much more dynamic.

At their core, Luke and Danny are both just hometown boys with daddy issues and a lot of ambition. Luke stayed in Star's Hollow and turned his father's hardware store into an extremely profitable diner. Danny's father abandoned his family in Staten Island when he was 13, but Danny worked his way up to being a partner in a Manhattan OB/GYN practice, and harboring a pretty serious fear of commitment. Luke and Danny's loyalty toward things like their hometowns and Bruce Springsteen help them avoid opening themselves up again — after respective heartbreaks with Rachel and Christina — until the moment they finally cop up to what's right in front of them. (Hint: It's their special feelings for their secret best friends.)

They're not the best at dealing with their emotions, but...

Luke and Danny may be a little guarded, but they're total heart-eyed softies when it comes to Lorelai and Mindy. These bros love a grand romantic gesture, and let's face it, they're a little dramatic. Remember when Danny finally went for it on the plane back from California?

Remember when Luke took the dive at the opening of the Dragonfly Inn after preparing himself for weeks?

These are men who know what they want, and after a few years of ignoring it, they go all in. OK, and yes, they can be jerks too; but these are flawed men and flawed women, and the best relationships are the ones that make their flaws work together as well as their strengths. Let's hope Danny and Mindy can make it through with one less breakup (and one less extra marriage) than Luke and Lorelai, but hold onto that shared firecracker chemistry.