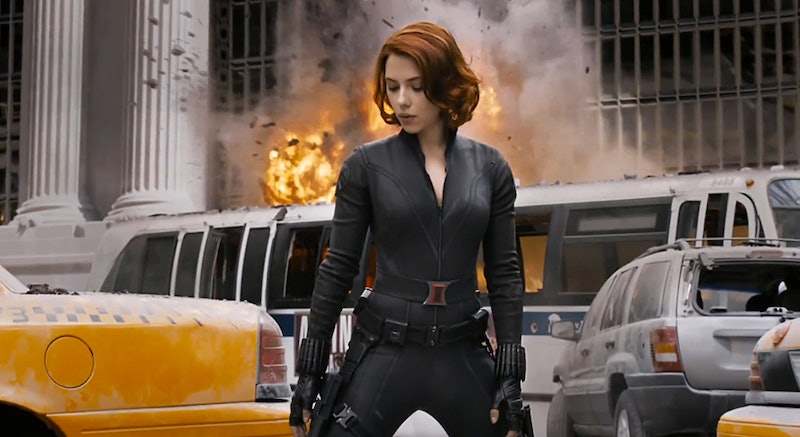 Dating a superhero or superheroine (is that a word?), should the opportunity arise, is not a decision that you should make lightly. First, there are the obvious reasons: it would be an utter nightmare to ever attempt to schedule a date, because 9 out of 10 times you did try, some goon would pick that moment to try and upend the city (typical). You couldn't tell your friends and family who you were really dating, even though you'd be dying to. Also, your life would be in constant mortal peril, what with movie writers using your death to fuel all the angst your crime-fighting beau needs to make the next installment of his or her movie franchise darker and grittier than the one that came before. Yeah, that classic dating problem.

But if you can get over all of those potential hazards, I imagine that dating a badass vigilante would have some undeniable perks: You would get to know the person behind the mask, and become privy to all of the city's darkest secrets. With all the adventures you'd be having, it's almost guaranteed that life would never be boring. Plus, if you love someone enough, even the most dastardly (never enough occasions to use that word) villains can become tolerable.

Still, the experience of dating a superhero or superheroine depends on who exactly you're dealing with. Every crimefighter comes with his or her perks and drawbacks, and it's important to examine all of them carefully before you get in too deep:

Perks: He's adorable. He'll probably teach you how to skateboard. Also, don't lie – you've always wanted to know what it would be like to swing on a web around the city with a guy in a giant red and blue unitard.

Drawbacks: He is totally below the legal drinking age (womp). Also, is it just you, or is every member of the Sinister Six out for your blood? Plus, you just know Peter Parker is the Needy Boyfriend. He's chock full of neuroses and insecurities and Girl Next Door issues.

Potential Dates: A walk in the park or maybe a stop at a food truck. What, do you think this kid's made of money?

Perks: She listens well and gives the soundest advice on the planet. Or any planet, for that matter. And let's not even talk about the sex. (Actually, let's. Let's talk about the probably-insanely good sex all day.)

Drawbacks: She's not super big on that whole "secret identity" thing anymore, so dating her subtly would be near impossible.

Potential dates: She can astrally project herself into mythical lands, so pretty much anywhere you want. Also, she can fly. Double date with besties Superman and Lois Lane, anyone?

Perks: He would be the most loyal boyfriend of all time, superhero or not.

Drawbacks: Maybe getting targeted by Hydra. Also his best friend Steve is just a tad out of touch with, well, just about everything.

Potential dates: Hanging out with the wild birds he trains, or running around the monuments in DC (just never, ever, ever say, "ON YOUR LEFT!")

Perks: She loves fiercely and treats everyone like family. Like, if anyone messed with you, she would just blast them out of the solar system, and then immediately settle back into being the nicest, most upbeat girlfriend ever and suggest you guys go get thai for lunch or whatever.

Drawbacks: Make sure you have dental insurance, because you're in for a lot of cavities. This girl does not skimp on sweets.

Drawbacks: He's always waiting for you to get ready on nights out. Apparently you're suuuuuper slow.

Potential dates: Los Angeles, New York, Orlando – all on the same night. Because when your boyfriend has ridiculous super speed, why not?

Perks: She's a psychological mastermind, so she would probably know what you're thinking before you do. Plus she could teach you how to say all kinds of dirty words in Russian.

Drawbacks: You're going to have the lyrics "I'm a Black Widow, baby" stuck in your head until the next ice age.

Potential dates: Does Natasha Romanoff go on dates? I feel like a date with her would be a international crime lord bust in some rusty tower in the middle of nowhere. And you'd still love it. (You'd love it even more if she had her own movie, but you're willing to wait.)

Perks: You get invited to all the coolest parties in Gotham. And I'm not sayin' you're a gold digger, but I mean.

Drawbacks: What exactly is going on with his friend Catwoman, anyway? Also, you'd better pray there isn't a breakout in Arkham Asylum or you're probably the first one they'll come for.

Potential dates: Riding around in the Batmobile and doing some killer cardio workouts. Probably some stuff with leather too, ifyouknowwhatImean.

Perks: She saved Iron Man from certain death before she even hit puberty, so this girl's got a lot of guts. She's up for anything.

Drawbacks: Strangers keep coming up and petting her giant mutant squirrel tail and even though she's cool with it, it makes you a little jealous, you're not gonna lie.