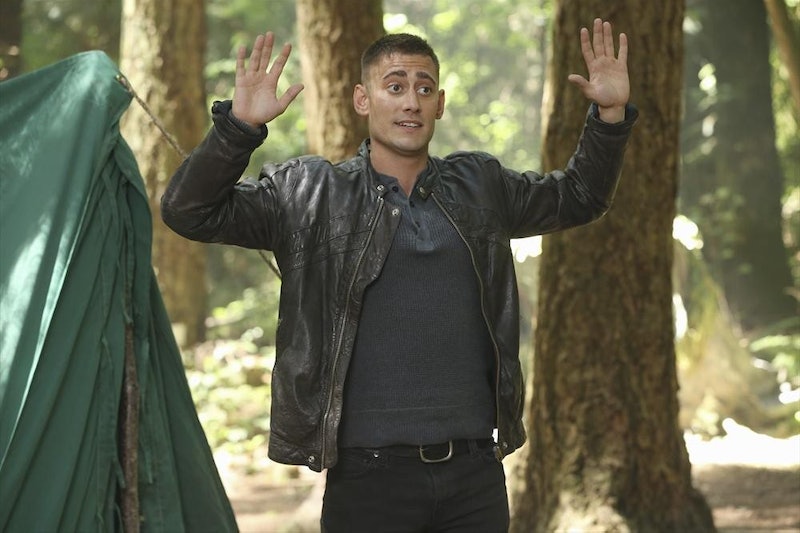 This Sunday's episode of Once Upon a Time brings back a OUAT in Wonderland favorite: Will Scarlet, also known as the Knave of Hearts. An official ABC press release announces that "Emma and David find former Merry Men member Will Scarlet rummaging through Robin Hood’s tent." What an entrance, especially considering his history. The character, played by Michael Socha from the UK's Being Human, was one of the highlights of the short-lived OUAT in Wonderland with many a wise-cracking remark and a tortured romantic past. You might also recognize him because his sister, Lauren Socha, played Kelly on Misfits and both looks and sounds just like him. When we left the Knave in Wonderland, he was living happily with his Queen Anastasia. I hope that's not about to change, but you never know. Another highlight of OUAT in Wonderland, for me anyway, was the loving and functional platonic relationship between Will and Alice. Some may disagree, but I found it refreshing.

I'm honestly pretty pumped about this addition to original formula Once Upon a Time, much more so than Frozen fever. If only I could tell you that OUAT in Wonderland was streaming somewhere. Once you get past the hokey CGI, it became a charming little series. But if you didn't stick the spinoff out, here's everything you need to know about the Knave before he clashes with Emma Swan on Sunday.

Well, not exactly. But in one episode of OUAT in Wonderland, we saw the Knave's adventures with Robin Hood and his Merry Men. In the clip above, Scarlet convinces the men to steal from Maleficent's Castle, which is particular interesting to me as Kristin Bauer van Straten will revise her role as the Sleeping Beauty villain. This also bodes well for a re-visiting of the Mulan/Aurora relationship. Just sayin'. Anyway, this backstory is also important because Will ultimately lied to Robin Hood and his men. He stole Maleficent's looking glass in order to escape to Wonderland with Anastasia in the first place. The enchantress almost caught them — it was a whole thing. The point being: you don't trick a thief and get off easily! Will's definitely not on Robin Hood's good side.

Another important bit to note about Scarlet's history in the Enchanted Forest is the casual mention of his younger sister, Penelope, who fell into an icy lake and died. Did someone say ice? Is his sister Elsa? Is his sister Elizabeth Mitchell's character? Was his sister killed by one of those ladies? It's too much of a coincidence to ignore.

In the pilot of OUAT in Wonderland we learn that Will Scarlet got swept up in the Curse (or so it appears) and was biding his time in Storybrooke until the Rabbit visited and the two of them sprung Alice from her asylum in fictional Victorian England. We visited Storybrooke once more during the spinoff series, when Alice and her genie boyfriend Cyrus went to retrieve the Knave's heart from his apartment and were fascinated by light switches and refrigerators. Why not?

There was even a cameo from Jessy Schram as Cinderella — remember when Cinderella was on this show? We haven't seen her since Season 1. I bring this up because the aforementioned Anastasia, Red Queen and Will's one and only in Wonderland, is widely believed to be one of Cinderella's stepsisters. We never learned her mother's name, only that she was disappointed in Ana for choosing a commoner to marry and hoped her sisters would do better. "The only way you'll be coming back in my house," her mother sneers in the episode, "is to empty my chamber pots." Sure sounds like Lady Tremaine, doesn't it? That was maybe one of my favorite "connections" in the entire series, though it was never stated directly. Maybe that has something to do with Will's return? Hand-delivering wedding invitations, perhaps?

The Knave of Hearts was a begrudging anti-hero (in the Han Solo sense, not the Walter White sense). Like Regina, he was living without his heart in his chest for safekeeping. He was loyal to money and favors and sometimes Alice. He was betrayed by Anastasia and convinced by Cora, aka the Queen of Hearts and Regina's mommy dearest, to give her his heart and work for her as a Knave under her control. Gross. I can't wait for the scene this season on OUAT where Will and our Storybrooke heroes have a bitch session about Cora over beers, or cinnamon cocoa, or whatever they drink. When he first met Alice, she helped him steal his heart from Cora. Then they went their separate ways.

I hope this makes sense. The timeline of Wonderland in relation to all the curses and visits to Wonderland we've seen on OUAT proper is already a headache. Don't get me wrong, I understand why Sebastian Stan was too busy to make an appearance as the Mad Hatter. But some clarity, or a mention of the 28-year curse, would have been appreciated.

I leave you with the last thing you need to know about Will Scarlet and his glorious Northern Accent: his affinity for the word "bloody." Let's hope we at least get to hear more of that when he makes his OUAT return.