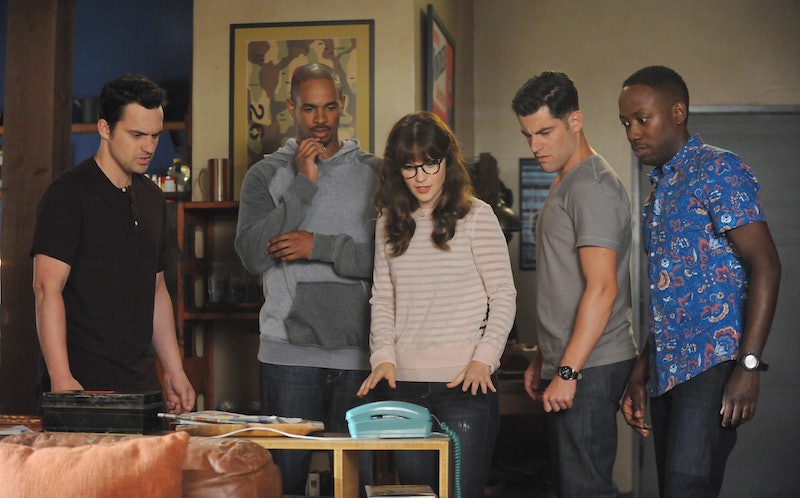 We've seen Nick Miller the bartender. We've seen Nick Miller the zombie novel writer. And now New Girl has given us what could very well be the best version yet — Nick Miller the secretary. On Tuesday night's New Girl episode "Landline," Jess decided to install a landline phone in the loft after the gang experiences a terrible bout of poor cell phone reception. (Been there!) And since everyone else works during the day, that left Nick to man all the incoming phone calls — most of which were for either Schmidt or Winston. Before you know it, he's taking messages, conferencing them in for their "midday update," and just all-in-all being a surprisingly diligent worker. In fact, I doubt we've ever seen him put in so much effort into anything before. And I gotta say, I kind of love it.

Unfortunately, Winston and Schmidt don't exactly feel the same. With Nick so immersed in their everyday lives, they can't seem to keep anything from him. (Did you know Winston was seeing a girl named Judy? Or that Schmidt gets his socks dry cleaned?) So they do what anyone would do and buy a machine to take his place. (Figures.) Suddenly, Nick's secretarial duties are no longer necessary, and when Winston inquires why Nick became so obsessed with answering the phone, his answer was simple: he misses his friends. With everyone so focused on their own jobs and relationships, Nick hardly feels like they spend any time together anymore. He, like us, misses that special New Girl bromance we've come to know and love. And he's willing to do almost anything to get it back — even if that means doing actual secretarial work.

But could the pain go deeper than that? Here I've been so obsessed with Jess' recent dating disasters that I've completely forgotten to think of how Nick fits into all of this. Because as hilarious of a secretary as he definitely makes, there's one major thing we should take away from this episode. He's lonely. Now that he and Jess are no longer together, it's probably created quite a void in his heart. And while Jess has been dating like crazy, Nick's remained unattached of romantic entanglements. The cell phone service may be a little shotty in the loft, but that underlying message was received loud and clear.

So come on, writers, throw a little love this guy's way, will ya?