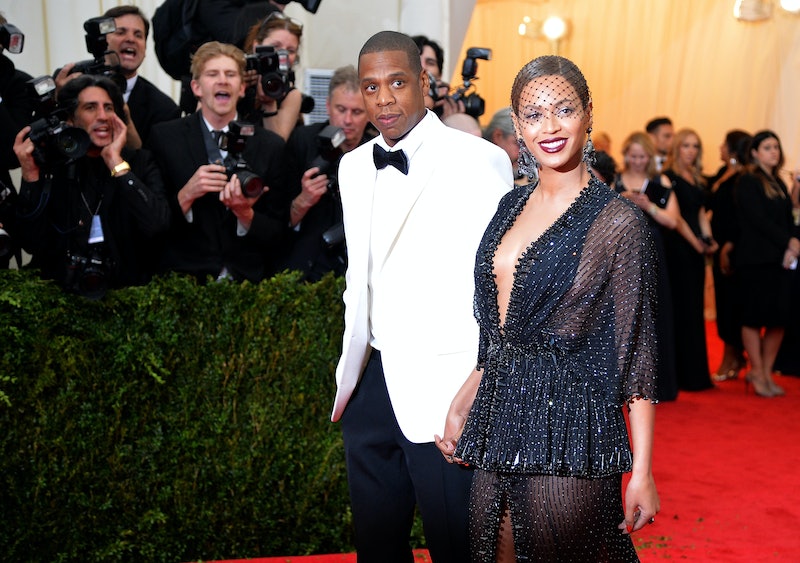 With just two weeks to Halloween, it's not too late for you and your boyfriend or girlfriend or BFF to come up with the perfect Halloween couple costume. And what might that be? Well, there's no better couple to emulate than Bey and Jay, which is why you should pick one of these funny Beyonce and Jay Z couples Halloween costumes for October 31. Your friends who came dressed as ketchup and mustard bottles or salt and pepper shakers will be totally jealous of your creative couples costume.

The good news is that it's not even that difficult to emulate Queen Bey and her royal husband. With just a few steps and a couple of dollars, you can transform yourself into everyone's favorite music idols. But a classic Beyonce and Jay Z costume is too boring. Instead try something creative. And no, I'm not talking about making fun of elevatorgate. Not only is that too expected, but I still think it's insensitive especially considering the Ray Rice elevator incident.

Let's leave elevators behind and go with these quirky, funny alternatives. They'll make people think a little bit, which makes you look clever. And if you can look like Beyonce and be clever on the cheap, never say no to that.

THE STANDARD BEYONCE AND JAY Z

Most of the following costume ideas require adding props to an already built costume. So to resemble Queen Bey throw on a lace body con dress like this red one for $22 and give yourself a powerful, curly blowout.

For Jay Z, you'll need a baseball cap, white shirt, jeans, and some bling. Oh, and don't forget the sunglasses.

Throw on your Beyonce and Jay Z outfits and then go crazy taping fake money to your costumes. It's well known that this power couple is filthy rich and you'll be a walking symbol of their status.

Bey and Jay in Paris was to-die-for. That pic of them posing in front of the Mona Lisa was epic. But don't just copy this look, copy one of the memes of this look.

You'll look way more in touch with pop culture. Dress up like the famous piece of art by throwing a dark robe over a dark dress and giving a mysterious half smile. Then print out a picture of Bey in the frame and carry it with the two of you. Have everyone praise her as the master piece she is.

Get all meta by having you and your partner dress up like Maya Rudolph and Jay Pharoah dressing up like Bey and Jay. Beyception. For Maya's look find a gold dress like this one for $33

Then refer to yourself as Beybey-bey all night long like in the sketch. For Jay Pharoah's look throw on a white button up, a black hat, and a gold chain. Jay Pharoah's terrible sense of humor should probably not be included. Besides when Maya's in the room, Jay doesn't need to talk.

MEMBERS OF THE BEYGENCY

Remember Andrew Garfield's SNL skit about the FBI-style agency that took down Beyonce haters? It's pretty meta to dress up like Bey and Jay if they were members of the Beygency. (Which, let's be honest, they probably would be if it were real.) Style your hair and pile on the bling as usual to look like the couple, but then just wear these $25 Beygency shirts for your costume.

I'm talking pre-elevator gate when Jay Z got down on one knee on the red carpet to put a ring on it. To replicate the look, throw on a slinky black dress like this one. It's $50 but totally reusable for future parties.

Then have your partner don a white tux or blazer and spend the night "bowing down" to you (like the song says).

Everyone knows that Beyonce and Jay Z are totes in the Illuminati so this costume will play really well. Pay homage to this secret group by wearing an outfit covered in triangles (their symbol). This $16 skirt is a good option.

Then pick up some bling from Amazon featuring the all seeing eye and hope that the possibly evil organization doesn't come out of hiding to chastise you for mocking them on Halloween.

Puns are funny. Go as a literal bee with a crown to symbolize Queen Bey. You can find a bee costume here for $25.

Then instead of antenna, wear a crown like this one from Amazon for $5.

Then have your significant other go as the letters J and Z. Wooden letters are easy to find at stores like Walmart for under $5. Just tape them to your Jay Z costume and you'll be set.

The options for a funny Bey and Jay costume are endless so get creative and come Halloween night, you're sure to be as popular as the couple themselves.