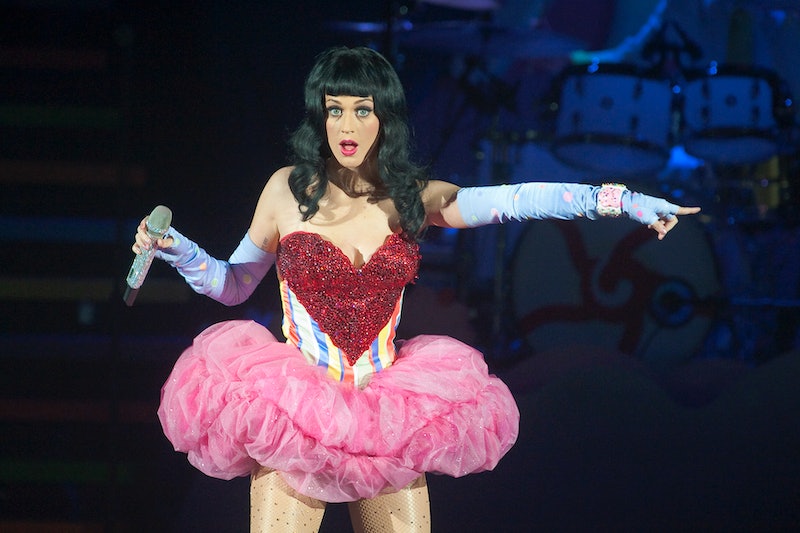 We're pretty much obsessed with Halloween here at Bustle, in fact we've been giving you Halloween costume ideas right and left. Personally, I never need said ideas, usually I know my Halloween costume as early as November 1. Like, there's a waiting list, you know? But if all else fails, it never hurts to go for the quintessential pop star Halloween costume.

But you can't just pick pop star willy-nilly. Selecting which contemporary artist is your soulmate requires intense deliberation and soul-searching. Are you a Miley or a Iggy? A Taylor or Beyonce? Do you want to be sexy? Adorable? Powerful? Can you handle the burden of a wig? Will you go wig-free or rock mermaid hair? And just how opposed are you to wearing a bra made of whipped cream cans? Decisions, decisions!

If you're really confused, let me try to clear some things up. Based on what pop star costume you select, I can pretty much tell everything about you. Here's a quick evaluation to help you out. Note that Ariana Grande is conspicuously left off said list, because I think it's a terrible costume and I still don't know what she's doing off Victorious. Such a great show, really.

What You'll Need: Neon spandex, a platinum blonde wig, the best ass in show business, and if you're still at a lost, feel free to consult the official guide.

What It Says About You: You are bold and unapologetic, as in, you are probably not morally opposed to leggings-as-pants, even though you maybe should be.

What You'll Need: Cute, printed separates (bonus points if the shorts are high-waisted), red lipstick, adorable lob haircut, and that's just the tip of the iceberg.

What It Says About You: You just like, really need a pumpkin spice latte right now or you'll literally die, I swear. No, not even, you probably just have respect for the fact that T. Swift is the best-dressed pop star in show business.

What You'll Need: A floral headband, some sick cardigans, oodles of pastels.

What It Says About You: You don't care what people think about you, you stylistically tend to veer towards the cute end of the cute to sexy spectrum, and you probably have a batch of cupcakes baking in the oven right now. Bless.

What You'll Need: It's pretty much a compromise of 70 percent lace body suit and 30 percent wind machine. Extra points if you have your own Jay Z.

What It Says About You: You're #flawless. Because if you weren't #flawless, there is absolutely no way on Earth you'd be able to pull off a costume of The Great and Powerful Beyonce. That's like trying to dress up as Jesus, only 3,000 times trickier.

What You'll Need: An overeager tongue, a mouse bodysuit, a foam finger, pretty much just look in the clearance section of any Spirit Halloween.

What It Says About You: Sweetheart, you may need to check that calendar, because it's 2014, and that was the definitive costume of last year.

What You'll Need: I ... I don't even know anymore. It used to be that you could wear a bunch of bubbles or staple a ton of Kermits to you and Voila! Instant Gaga costume. But then she showed up on her Muppets Thanksgiving special last year wearing a flannel and a six feet tall wig, and I don't know what to tell you.

What It Says About You: You need to check out the calendar even more than the Miley Cyrus people, because this was the definitive costume of 2009. That aside, respect to all the little monsters that are hanging in there, but I've had a rough time sticking on the Gaga train since that Thanksgiving special.

What It Says About You: You're either incredibly self-aware, incredibly melodramatic, or both, and you've definitely been in an Urban Outfitters within the past month. Fun fact, this is actually my costume this year so nobody's allowed to do it. I'm kidding, of course! (I'm not). You can totally do it if you want to! (Seriously, don't). But honestly, it's fine. (I spent $50 on my wig and I will fight you).

What You'll Need: Either a standard black Bettie Page wig or a blue Bettie Page wig will do, although any crazy color probably works at this point. Also tons of foodstuff to hot glue onto a unitard.

What It Says About You: You're a whimsical, fun-loving personality who doesn't take life to seriously. Or they were out of Sexy Geisha costume at Party City. There's two types of Katy Perry fans ...

What You'll Need: A shopping spree at Hot Topic, with specific focus on black lipstick and gigantic hats. Bonus points if you can tease up a bunch of brunette mermaid hair.

What It Says About You: You're between the ages of 14 and 19 and follow many soft grunge blogs on Tumblr. OR, if you add a mustache ala Randy Marsh, you have as great of a sense of humor as Lorde herself. Here's hoping I can convince my dad to do this for Halloween.