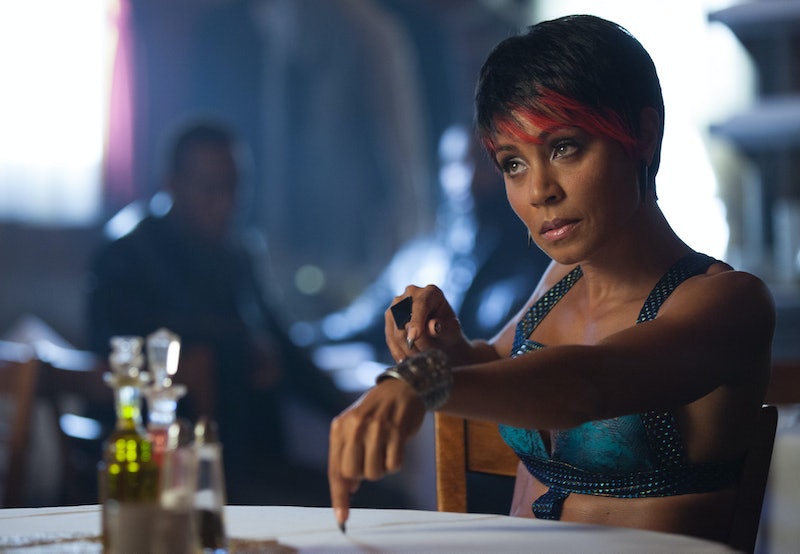 Everything fun about Gotham so far revolves around the Gotham City Mafiosos and Jada Pinkett Smith's absurd performance as Fish Mooney. But what is Fish Mooney's plan? After trying valiantly for the past five episodes to overthrow mob boss Carmine Falcone, Fish is now deferential, sticking up for him in a "Viper" trailer for Gotham Episode 5. And Falcone doesn't seem fooled, but she's insistent.

After the loss of the once-loyal Penguin in the pilot, Fish has been operating without a high level minion. She's only had Butch by her side, but he can't do what she needs — infiltrate and kill Falcone so she can ascend to Don of the Gotham Mafia. But now, it seems like she's going to use Liza to manipulate Falcone. Why else would she say that she needs a "weapon"? And why else would hand-to-hand combat be an element of a singing audition?

But there are many ways her plan could manifest itself. Obviously she could use Liza to get Falcone into an isolated place, and when he's at his most vulnerable, kill him. It's simple, it's classic, and it's… not that cinematic. Fish Mooney is a cartoon villain in an adaptation of a comic book — surely the writers can think of something a liiiittle more surprising than that. So what if she's planning on doing something a bit more complicated? She could use Liza to weasel information out of Falcone, incriminate him, and get him sent away either to jail or to the newly opened Arkham Asylum. It's the breeding ground of every Batman supervillain, and there's a precedent for it — In Christopher Nolan's Batman Begins, Falcone, as played by Tom Wilkinson, was sent to Arkham under a phony-turned-real insanity plea.

And Mooney has been very cozy with the cops since day one. Giving up Falcone to the cops would be a sign of goodwill from her towards them, but it would also create a political and economic power vacuum — remember, Falcone has stepped into the power vacuum from the death of the Wayne family, so we're already dealing with a struggle between the establishment and organized crime becoming shockingly legitimate. It's setting up the Gotham City of Bruce Wayne's adulthood, where the Mob is brazenly controlling everything, and Fish Mooney is well on her way to making that happen sooner rather than later.