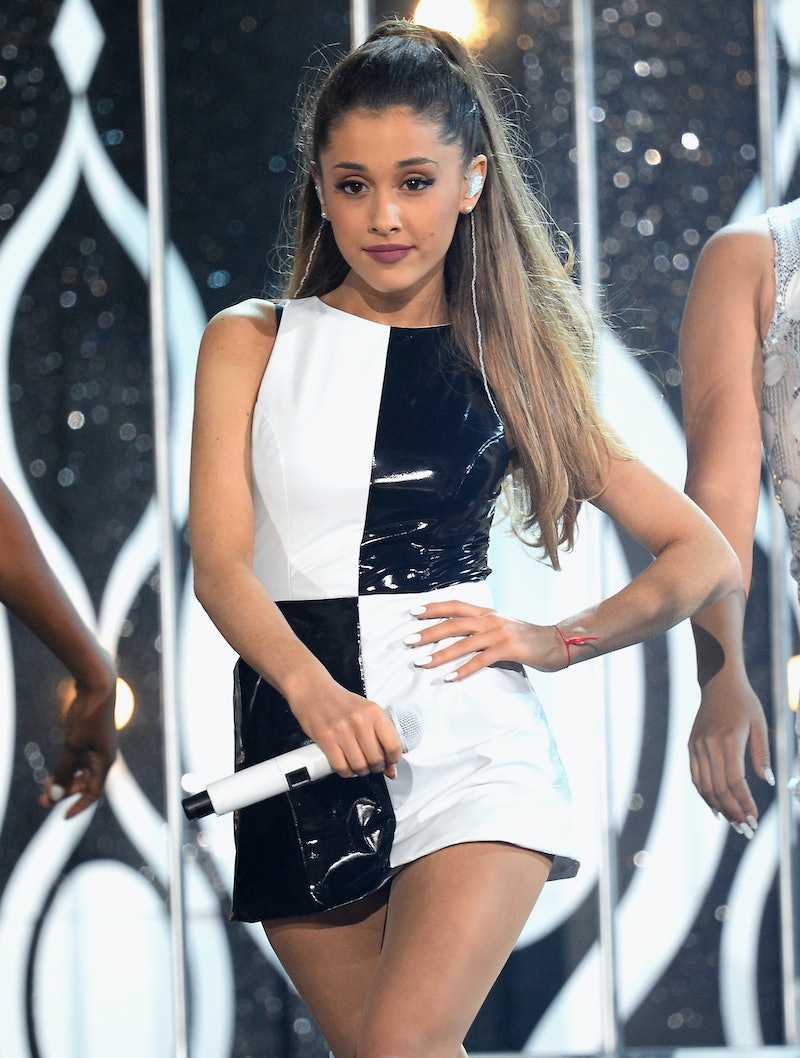 While things have been pretty quiet lately, there were a few weeks where there was a new rumor everyday about Ariana Grande's diva-like antics. From her photography preferences (exclusively the left side of her face) to crazy comments she supposedly made about her fans, it sure seemed like she was a bit of a handful. She was even compared to Mariah Carey — and not just because of their vocal ranges. After all that, Ariana Grande addressed the diva rumors (again) in an interview with The Mirror, and it turns out she found support in an unlikely source: Miley Cyrus.

Grande told the publication, "I was upset and I contacted Miley. I said, 'Miley, I’m so sad — what do I do? This isn’t true. My heart is broken, I feel so bad.'" Actually, it makes perfect sense that she went to Cyrus, considering she knows a thing or two about having a ridiculous reputation. Luckily, she knew just what to tell the "Problem" singer:

She was like, "Girl, don’t even look at it. Just be happy that you’re blessed. You have family and friends [who] love you, you have fans that love you who know what’s true and what’s not. It will blow over and tomorrow they’ll be talking about something else."

This is such great advice! Grande pretty much is the definition of hashtag blessed. She has a successful career, loving family, awesome friends, and adoring fans. Who cares what the public thinks? While it took more than a few "tomorrows" before it blew over, I'd say people are basically over the diva reports. Grande called Cyrus a "beautiful spirit" and said she really helped her feel better.

Besides the fact that she finally spoke out, the greatest part of the interview was where Grande talked about the difference between genders, in terms of how they're perceived when successful. She didn't outright say she's a feminist, but her statement echoes the same ideals. When asked if females have a tougher time in the industry, Grande said,

If you see a woman working hard who is successful — who doesn’t stop until she reaches her goal, who is strong and has wishes and dreams she wants to fulfill, and works hard every day — you label them a diva. But if you see a man doing that, you’re like, "He's incredible, he’s an amazing businessman."

She raises a very valid point! It's reminiscent of that whole difference where take-charge women can be called "bossy," whereas guys are high-fived and respected for being authoritative. Being called a "diva" is like the music world equivalent of that, I suppose.

Either way, I'm happy to hear Cyrus and Grande bonded. Now that she's finally addressed the Big Sean dating rumors too, it's like Grande is clearing the air in all aspects in her life. Looks like she's got less problem without them — and by "them" I mean all of the insane rumors.