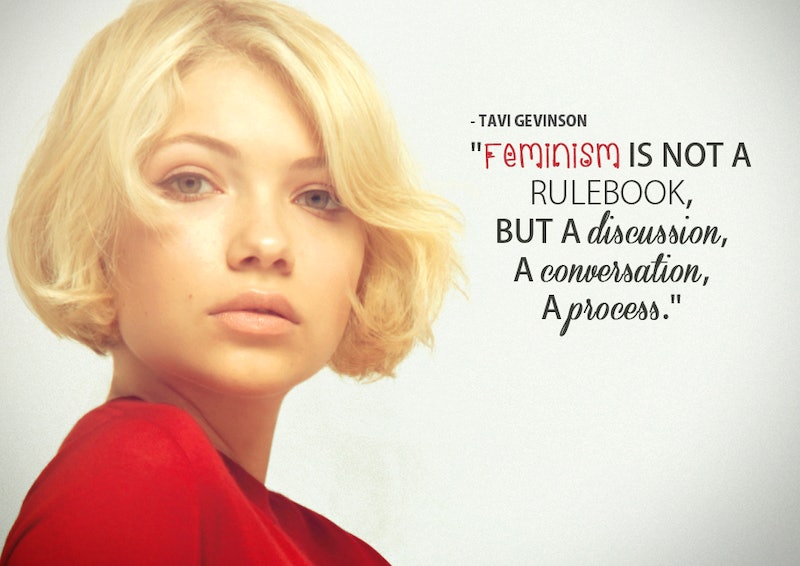 What's in a name? When it comes to feminism, everything. The term "feminist" is certainly having a moment this year: Malala Yousafzai won the Nobel Prize for insisting that girls have the right to education, Emma Watson drew massive headlines for her "I am a feminist" speech at the UN, and even male celebrities from Daniel Radcliffe to John Legend have lined up to openly declare themselves feminists.

Yet, at the same time, there is still a debate over whether the f-word, which was coined all the way back in 1837, has seen its day, and should be replaced, rebranded, and updated to be something with a little less baggage. Just last week, rock star Annie Lennox called feminism "a loaded word" in a conversation with the Huffington Post.

"I've personally thought about, what's an alternative?" she said. "Is there another word instead of using 'feminism'? Because it seems to be so challenging for people." The sentiment was also referenced in Watson's UN talk, where she mentioned that "feminism has become an unpopular word; women are choosing not to identify as feminists."

When the misconceptions surrounding a word are so pervasive that somebody as eloquent as Chimamanda Ngozie Adichie (you'll know her from her groundbreaking TED talk and book We Should All Be Feminists) briefly referred to herself as a "Happy African Feminist Who Does Not Hate Men And Who Likes To Wear Lip Gloss And High Heels For Herself And Not For Men" — well, Houston, we seem to have a problem.

The f-word, as we all know, is still slightly terrifying to some. Even in the age of outspoken feminists like Beyonce, Tavi Gevinson, and even Aziz Ansari (check out his feminist manifesto below), declaring yourself a feminist is still often viewed as a startling political statement. It conjures images of bra-burnings (which, let's remember, never happened) man-hating, underarm hair, and other uncouth, "unfeminine" behaviors. (Many starlets who first said they "weren't feminist" before later recanting, like Taylor Swift, were likely scared off by its perceived aggression.)

Feminism is still seen by many women and men to be an angry word, a word that connotes fighting the status quo, making people uncomfortable, challenging cherished institutions and beliefs. And I would argue that that is exactly why we shouldn't move away from it.

Here are five common beefs with the word feminism, and my arguments against them.

Claim #1: It's Too Aggressive

The core of feminism — that women innately deserve the same rights as men — isn't complicated. But it's still, in many parts of the world, a hugely radical position to hold. And until it stops being radical, until it becomes a normal state of affairs and the fight for rights evolves into more of a maintenance job, anger is legitimate and valuable. Confrontation is valuable. To make change, you often have to make people uncomfortable.

Largely, people hesitant to use the f-word aren't terrified of the ideology; they just worry that people expect feminists to yell. But it's possible to acknowledge that misconception and show that actually, yelling isn't a requisite part of feminism. You don't abandon ship just because you're frightened of the foghorn.

Claim #2: It's Too Complicated

Feminism has gone through many changes throughout its history. After the first wave's suffragettes (Emmeline Pankhurst didn't care if she scared anybody ), the second and third waves brought with them new thinkers like Gloria Steinem, new causes such as the right to choose and not be slut shamed, and new structures to challenge. This means feminism is not always coherent internally. Feminist activists disagree on a wide range of topics, from whether pornography is inherently objectifying, to whether sex work is anti-feminist. It's never been a simple movement, and that complexity can be off-putting. Can it really still be put under a single umbrella term?

We've contemplated moving away from feminism before. Post-feminism, in the 1990s, is a bit difficult to parse, but it essentially argued that feminism had achieved its goals and eliminated sexism, and that it should be put out to pasture while we got on with more important things. As anybody currently alive and female knows, this is complete and total nonsense. (Try telling that to Supreme Court Justice Ruth Bader Ginsburg and see how far you get.)

It's pretty standard for people inside an ideological group to disagree while still being happy to identify with that group — just look at, well, every major political party. Internal argument doesn't mean feminism is dissolving or mired in internal conflict; it just means that we're always actively questioning what the goals of feminism should be and how to go about achieving them. And that's a good thing.

Claim #3: It's Not Inclusive Enough

As Ellen Page eloquently put it, "How could it be any more obvious that we still live in a patriarchal world when feminism is a bad word?" But criticisms of the f-word don't just focus on its radicalism. Increasingly, there's been a feeling that the movement is more exclusive than it is inclusive — that feminism's problematic legacy of excluding women of color and men makes it an unsuitable cause to carry into modernity.

There's a lot of validity to this argument. Intersectional feminism, a term coined by Kimberle Crenshaw in 1989, refers to the fact that oppressive institutions (racism, sexism, homophobia, transphobia, ableism, xenophobia, classism) are interconnected and should not be isolated from one another. It arose as a response to the fact that until now (and arguably, still now), feminism has focused on the goals of white, straight, cis-gendered and able-bodied women, and that it hasn't taken into account (or has actively overlooked) the differing ways in which all women across every society experience oppression. No woman experiences life, or sexism, in exactly the same way — so is it still valid to have one (historically burdened) word for all of us?

Men have also voiced the feeling that they're wary to call themselves feminists for fear of invading female space: Pharrell Williams has said that he "doesn't think it's possible for me to be that, I'm a man ... but what I do is, I support feminists." That's a valid and even respectful criticism, but increasingly it seems to be a less popular stance, as famous men like Benedict Cumberbatch unhesitatingly label themselves as the f-word.

I believe that the best solution to this isn't to look for an alternative term. What we need to do is expand feminism to include the goals and experiences of all women. In fact, feminism must keep changing, adapting and expanding to accommodate every perspective — otherwise it risks, as Ava Vidal put it, "stagnation."

You know what's scarier than this supposedly scary word? That women's income compared to men in the U.S. is, on average, 81 cents to the dollar, that sexual violence against women is still a huge part of conflict worldwide, that people still ask rape victims what they were wearing, and that women worldwide are still overwhelmingly the more vulnerable, more legally disadvantaged, poorer, less healthy, less educated, less empowered gender.

We live in a world where the (male) British Prime Minister refused to wear a "This Is What A Feminist Looks Like" t-shirt for charity — five times. Gamergate's threats against Anita Sarkeesian demonstrated — with horrifying clarity — just how dangerous it still is to declare yourself a feminist.

So let's not walk away from the word that scares us, or water it down, or attempt to demonstrate that we're "not like those feminists." Strong issues need strong words. Feminism does not demand that all women fight for and discuss rights in the same way: we need voices that are quiet as much as we need drum-thumping anger. But uniting under one term, a term that at its essence urges our equality, is a form of strength — and this is still a world in which women's strength is too often ignored, disrespected, and suppressed with violence.

The day when the word "feminism" can be discarded is the day when it is no longer needed. That day is still very far away. We need feminism, in all its complexity, as much as ever.

More like this
5 Ways To Stand In Solidarity With Women In America From The UK
By Sophie McEvoy
How To Fight For Reproductive Rights, Based On How Much Time You Have
By Courtney Young
Why You're Seeing Green Bandanas At Abortion Rights Protests
By Lexi Inks
Beyoncé Delivers “Soaring Vocals” On New Album “Renaissance”
By El Hunt and Radhika Menon
Get Even More From Bustle — Sign Up For The Newsletter