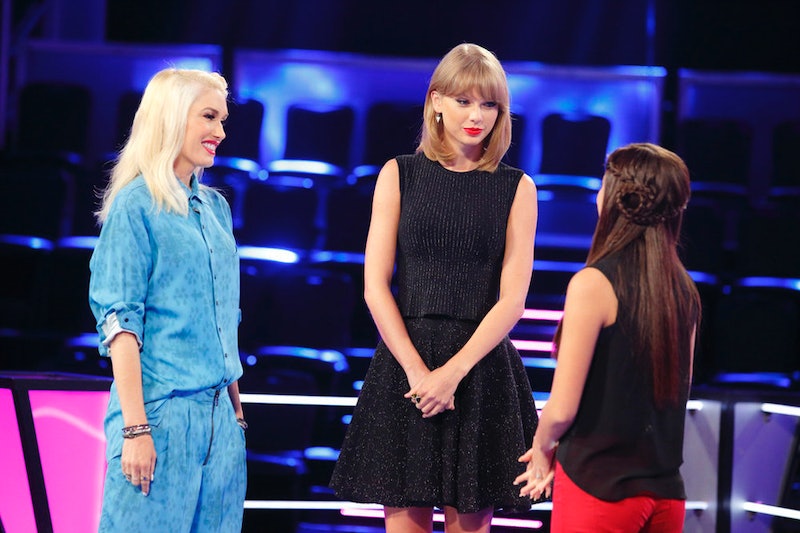 It's Taylor Swift's world, we're just living in it. The country-princess-turned-pop-diva certainly proved that today between the release of her new album 1989 and her appearance as an on The Voice. Her album release proved that she can not only do pop, but that she can get random celebs excited about her music and be a major force in the pop industry. Swift's appearance on The Voice, however, proved that she has what it takes if she ever decides to become a producer. And let's face it, we know she will sooner or later. But she also proved that she's hilarious, just by being her own weird self.

Swift provided The Voice contestants some great advice, which led to plenty of kick-ass performances, tough decisions for their coaches, and awesome one-liners. Her dance moves were as fabulous and awkward as ever, and her "doo-do-doo's" to teach the melody and different riffs were super adorable. To honor her appearance as The Voice' s best advisor ever, we've compiled a list of the best Swift-isms (it's a thing) from her run on the show.

For some reason I imagine Swift saying this almost every day of her life. I mean, the girl wears cute aprons to bake cookies for her famous friends on the reg. Only Bryanna Salaz was lucky enough to have a girls day that included hanging out with and singing with both Swift and coach Gwen Stefani.

We all call her Tay behind her back anyway, but how cool would it be if she gave you exclusive permission to call her by the nickname? It seems that only those with the same name as her are that lucky.

Just about everything from her short dialog with Adam Levine was hilarious. But how many times have you wanted to say this to someone? Well, Swift did. And to Levine nonetheless. I guess that's why she's the one making a living from throwing shade her exes. (But Adam, if you ever need someone to show your "cybergenic" body to, just give me a call.)

Taylor Swift may not have the best dance moves, but the girl knows how to work a song. She can't explain it in words, but she sure showed Griffin how to own that Justin Bieber song.

Jessie Pitts admitted her love to Swift when they met, and told her how much she loved her cat. But Swift was quick to correct Pitts, because she is the proud owner of TWO cats, Olivia Benson and Meredith Grey. (And she makes super adorable videos of them on the reg, FYI.)

"That was my go-to preteen karaoke song."

It's hard to imagine both Swift and The Voice contestant Damien performing "How Do I" by Leann Rimes. But Swift confessed that was her old go-to, you know, before she had her own songs to jam out to. She even did her own rendition of the melody of the song, which is impossible to type so you'll just have to imagine it on your own.

"That's a move I like to call 'working the cute boy factor.'"

Tanner Linford certainly did have the cute boy factor, and he proved it through his performance and his super adorable crush on Swift. He was totally star-struck by the tall blonde, but his performance in rehearsals only benefitted from her presence.

More like this
Taylor Swift Wants To Direct A Movie Next — But You Might Have To Wait
By Radhika Menon
Everything To Know About Taylor Swift’s 10th Studio Album, 'Midnights'
By Grace Wehniainen and Jake Viswanath
'Selling Sunset's Vanessa Married Her British Beau Nick In A “Fairytale” Wedding
By Darshita Goyal
What Demi Lovato Really Thinks About Child Stardom, Depression, & Sobriety
By Radhika Menon
Get Even More From Bustle — Sign Up For The Newsletter