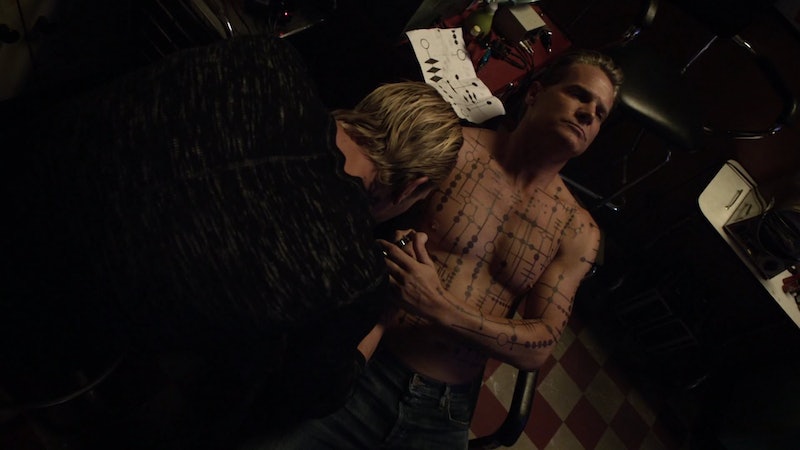 Yes! In between the Ward family drama, the teaser for Marvel's Agent Carter and the new Avengers: Age of Ultron clip, we finally got some answers about that dang alien language and/or map on Agents of S.H.I.E.L.D . OK, we still don't know what it means. But we discovered someone else who can write it. In the episode's tag, an unfamiliar man entered a tattoo parlor and we saw that the stranger's whole chest was tattooed with the alien symbols. He guided the tattoo artist's hands to add on to his extensive body canvas. Yes, Brian Van Holt's character is the other person out there compulsively carving these symbols, as I previously speculated. I'll be doing my victory lap shortly.

It's a pretty creative way to deal with this type of affliction, I think. The physical connection must help. I love this storyline, mostly because I loved Close Encounters of the Third Kind as a kid and that's what this reminds me of. Maybe the aliens on Agents of S.H.I.E.L.D. just want to have a jam session like they do in the Spielberg movie. Anyway, all we knew about this guy before was that he was carving the symbols on the backs of paintings in canvas, causing a red herring and an awesome "Philinda" tango scene. Now that we have seen a glimpse of this guy, who is he?

I think he is one of the Doctor's patients. This is Skye's father that I'm talking about. We saw him operating on some shady characters before. Who else could have administered the GH-325? He has to have been involved with S.H.I.E.L.D. unless someone took the drug out of the lab at some point. That "Guest House" where they found the drug was pretty underground and/or abandoned. Also, there were multiple drugs made from that unidentified alien (definitely Kree) that were being held there. Maybe he got a different one. Maybe they do different things.

Also significant? The stranger is not cuckoo bananas just yet. Maybe he's using the pain of the needles to manage his mental stability, but he's doing OK overall. Were he and Phil Coulson injected with the drug at around the same time? It took a long time for Coulson's symptoms to manifest, whereas John Garrett started down the dark path almost instantly. Did he take a higher dosage? Perhaps there is still hope for Agent Coulson after all.