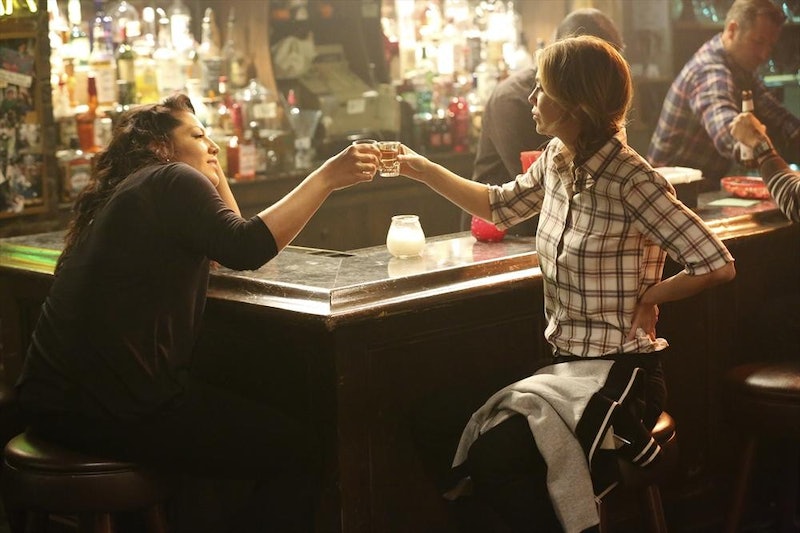 How fantastic was last week's episode of Grey's Anatomy ? OK, so the last few minutes were both heartbreaking and emotionally scarring as we watched Callie and Arizona's marriage implode right in front of us, but the rest of Season 11's fifth episode, "Bend and Break," was perfect enough to make me forgive the scheduling powers that be at ABC for robbing us of a new Grey's this week. The best part? When Meredith and Callie hit Joe's to bond over — what else? — tequila. And seeing them together made me come to the awesome realization that they're actually ideal BFFs and just haven't realized it until now.

They're both in need of a best friend right now, because they're both lacking their person. Callie was supposed to stay away from Arizona, both her wife and go-to person, and not only is Meredith without Cristina (the worst), but she's also fighting with Derek, so he's not an option either. And I'm not too sure we're going to see her logging any sisterly bonding hours with Maggie anytime soon.

Callie and Meredith could totally be each other's new person, and I can think of no perfect pair of BFFs on Grey's right now — besides Jackson and April, of course, but they're living a life of happily wedded bliss. What makes Callie and Meredith so perfect together? Let's examine the evidence.

They're both dealing with similar marriage issues

Let's face it: As much as I hate to admit it, Callie and Arizona's marriage might actually be over for good. And while I have full faith that Meredith and Derek will find their way back to each other eventually, as they always do, for now they're on really terrible terms. Nobody understands what these two are going through better than each other, and they've already become a super awesome mutual support system.

They've been through a common trauma

If you've forgotten all about the plane crash in the Season 8 finale, I don't blame you — I, too, was so traumatized by it that I try to forget it ever happened. Although Callie wasn't actually in the plane crash (as Arizona never lets her forget), she lost Mark just like Meredith lost Lexie. I think something terrible like this creates a permanent bond, and no one will understand that kind of loss like those who were involved.

They're super funny when they're together