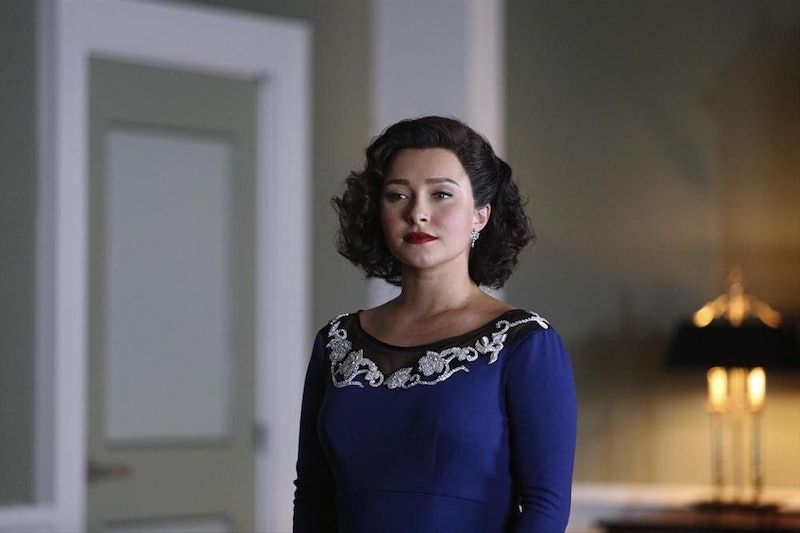 Going against just about everything I have come to expect out of her on Nashville , Juliette very blatantly announced her pregnancy to the press on Wednesday night's episode. Not only that, but when they asked who the father was, she didn't hesitate for a single beat before naming Avery. It seemed almost too good to be true for her to be so forthright about the situation after all the of the drama we've watched Juliette handle in her attempt to keep this pregnancy under wraps. But for the moment, at least, it brings some tentative relief — at least Hayden Panettiere won't have to keep hiding her real-life pregnancy behind walls and giant purses anymore.

Still, we have to wonder what brought on the change of heart. It is unlike Juliette to be that honest with the press about anything in her personal life without pulling some major teeth. We never actually saw the conversation between Juliette and Avery that we've been waiting for, the one that will decide whether or not he'll be involved with the baby. Juliette said at the beginning of the episode, “There are only two ways I can do this: with you all in, or without you completely.” But when Avery finally talked to her about it, he made it very clear that he was not going to pick either of those two options — so what exactly does he want? To be involved with the baby, but not involved with Juliette romantically? I can't really see it going the other way around, because of all the weird things that have been thrown at him in this season, he seemed to handle the pregnancy news like a champ (at least compared to Gunnar, who is, justifiably, freaking out about his secret son Micah).

All of this seems like it's falling into place a little too neatly for us to breathe easy just yet. Something that Avery stipulated when they were discussing this baby must have prompted Juliette to make that completely out-of-character move at the press conference, and I'm guessing by the look on Juliette's face as she walked away that whatever he said, we're not going to like it very much.