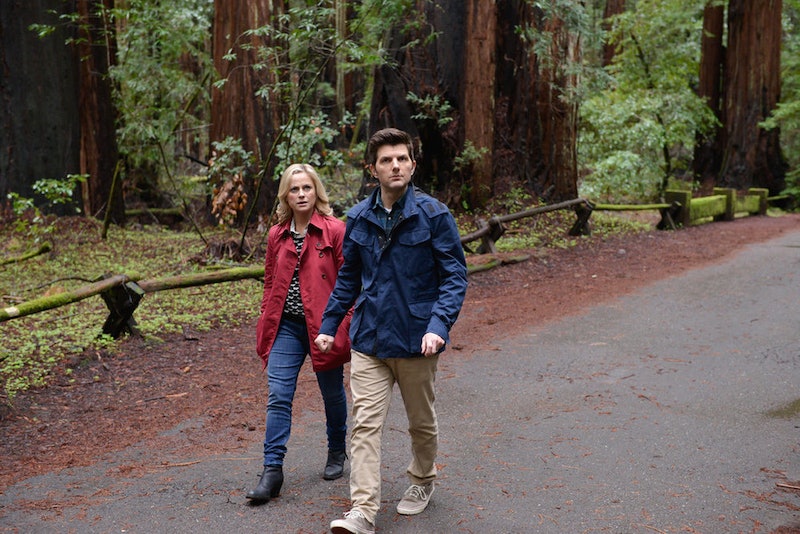 Parks and Recreation's seventh and final season may still be months away and quite a mystery, but I will be speculating about the series until the last second of the final episode airs next year. I'm sure most fans have imagined a future for pretty much all of our favorite characters and dreamed up scenarios with help from the cast. Amy Poehler's theory for Parks and Rec 's end is especially good. But the most intriguing tiny tidbit of information we've received from Season 7 doesn't relate to any one character. Parks and Recreation creator Mike Schur revealed that the show would be getting rid of its mockumentary format for Season 7. You're probably wondering, "What on earth does this mean?" While I don't know exactly what framework Schur and the writers are adopting for the series, here's what I do know: There are going to be some massive changes to the show we all know and love.

For starters, the basic setup of the show will be different, from camera angles to takes to everything else in between. But what exactly will be taken away from the show now that the format is jumbled? Here are the changes that might occur for the beloved series' farewell season.

If the show changes formats away from the traditional mockumentary style completely, that probably means we no longer get asides from characters describing how they really feel about a situation or another character. Sadly those talking heads are where we saw some of the best moments of comedy, including Tom's list of nicknames for food and other items (apps and zerts anyone?), Andy's previous names for Mouse Rat (including "nothing rhymes with orange" and "penis pendulum"), and Ron's many, many perfect moments.

But then again, the cast has also had their fair share of incredibly hilarious moments (both written and unscripted) from interactions with each other. As long as that continues, Season 7 should be just as funny as the past six.

I know this might sound really creepy, but I don't mean it in a "Peeping Tom" kind of way. With mockumentary style, just as in The Office, viewers get a chance to see moments on television as if they're a secret to everyone else in the world of the series has been revealed to the audience. It gives a sense of the audience being in the show's world. Obviously, other shows also reveal secrets to the audience that the other characters do not know, but there's something special and different about seeing something you're not supposed to see. For example, the moment when Ben and Leslie first kissed after their road trip to Indianapolis, despite Leslie telling the audience moments before in a talking head that it was a smart decision for the pair to not get intimate in any way for fear of losing their jobs.

One of the only complaints I have had in the past with Parks and Rec is the lack of storylines for Donna and, yes, Jerry. Both Retta and Jim O'Heir were thankfully given their due by getting series regular status and a slot in the opening credits. Perhaps without the talking heads and asides from all of the characters who do get a lot of screen time like Leslie, Ron, April, Andy, and Tom, there will be more time in the episode to focus on Donna and her relationship with her boyfriend Joe (the always hilarious Keegan-Michael Key). Plus there could be more time for Jerry and his abnormally beautiful family. Maybe we can finally get to the bottom of Ben's most burning question, how did Jerry actually get his wife to marry him? I also wouldn't mind learning more about Craig. He's so much more than his hilarious volume control issues, I just know it.