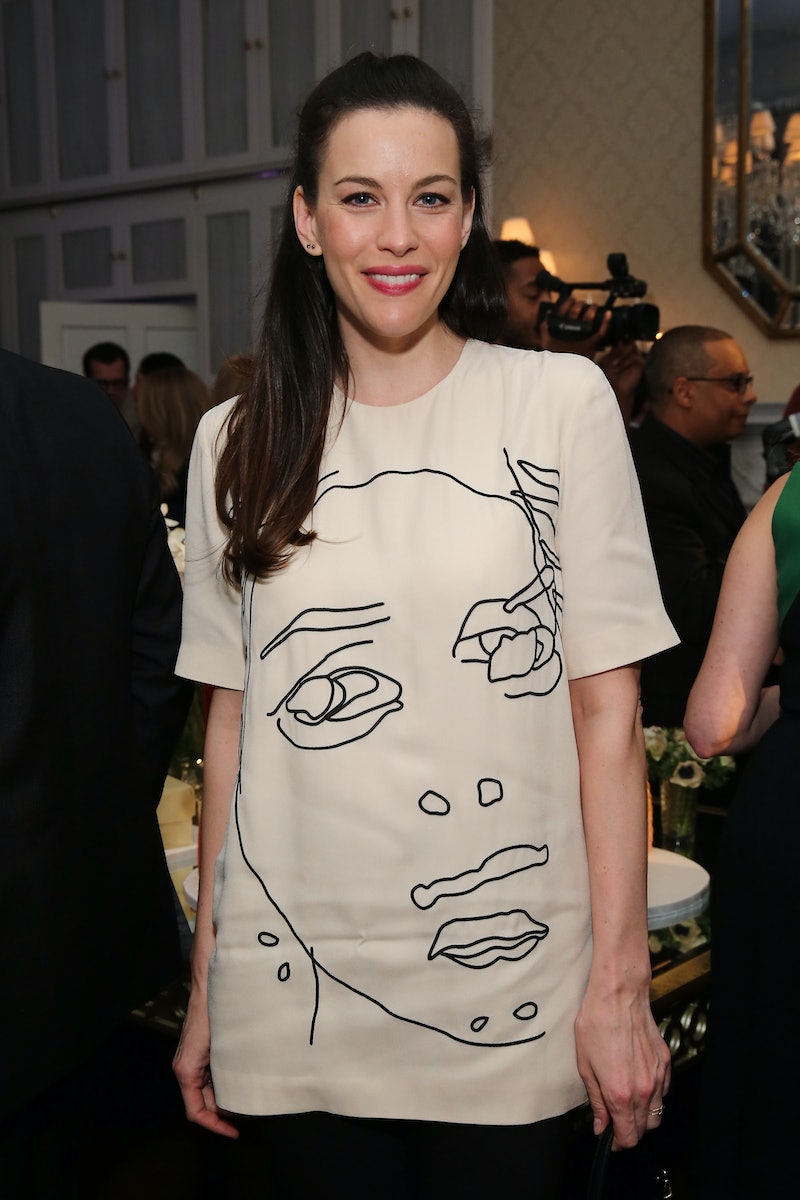 I must admit, gushing about celebrity babies is one of my guilty pleasures. Perhaps because I know that they will ultimately be MUCH better dressed than me before they reach the age of two. One of the latest famous faces who's announced she's pregnant is ethereal timeless vampire Liv Tyler. On Wednesday night, the Leftovers actress posted THE most adorable baby bump Instagram that could possibly be: a Halloween themed 'gram of her dressed up like an oven. Because she has... a bun in the oven. I can't handle the level of squee. But this might be raising a certain question for you — when is Liv Tyler due?

The 37-year old actress (who looks better than I do at 24) is pregnant with her second child with rumored boyfriend Dave Gardner. She's already a mama to Milo William Langdon, her son with her ex-husband Royston Langdon. But when exactly is the baby coming? Unlike many celebrities who try to keep their baby bumps on the down low (for good reason — I mean, look at all this speculation we're doing), Tyler showed hers off with her bun in the oven costume. So, of course, as a former English student, close reading is in my wheelhouse, and what better way to put it to use than attempting to decipher when exactly Liv Tyler will welcome an undoubtedly beautiful baby into the world? I humbly present my evidence for your consideration. Let's work backwards, shall we?

The Bun in the Oven

If there's anything I love more than a good Halloween costume, it's one that's cheeky or punny. Tyler's got all of the above: she posted the two sweet pictures of her dressed up with a "bun in the oven," and though it's hiding her baby bump, it's just more pride about her new baby on the way. Also, those saddle shoes! So cute.

At the beginning of October, Tyler attended the Miu Miu show at Paris Fashion Week, and bared her bump proudly for the world to see. She looked gorgeous as always in a blue floral dress. And though her bump be but little, it is FIERCE. She's definitely showing, so she must be at least four or five months along, I'd say.

Quite shortly after the news of her pregnancy broke, Tyler was seen with an itty bitty bump at the beginning of September. Also her maternity fashions are on point. So let's say she's just starting to show, so she is perhaps four months into her pregnancy. (I'm not a doctor, but I play one on the Internet.)

Hiding Behind a Hat

And shortly before it was announced that Tyler was pregnant, she was seen chillin' out maxin' relaxin' all cool in Spain, covering her baby bump with her panama hat. But it's definitely there under those lovely flowing dresses!

I'd say since Tyler was showing in late August/early September, I'd put her baby due date sometime in February. Maybe a little Valentine's Day bundle?