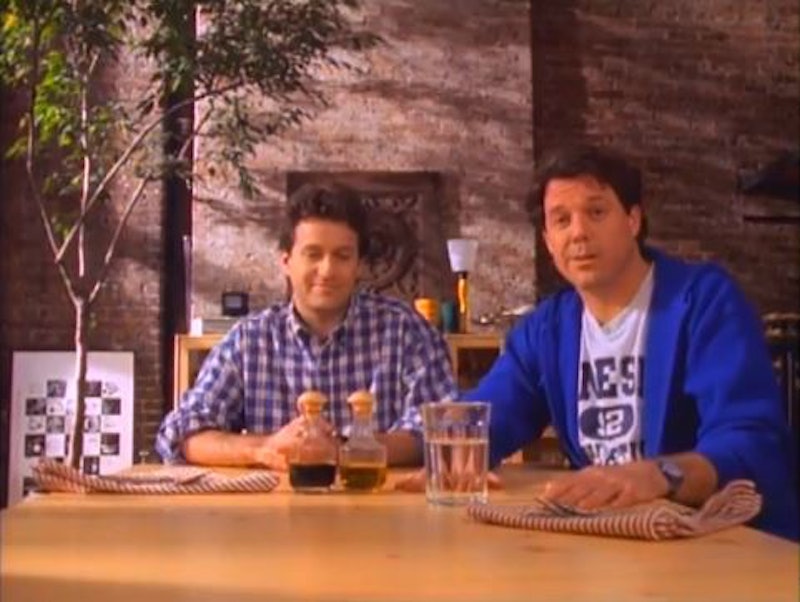 Back in 1994, Ikea made advertising history by running the first mainstream commercial featuring a gay couple. Called “Dining Room,” the ad aired in three cities — New York, Philadelphia, and Washington, DC — and only after 10 p.m. The geographical limitation makes sense; they were three of Ikea’s most active markets at the time. But why the time constraint? It was so the ad wouldn’t be seen during “family hour programming.” The ad was part of the “Lifestyle” campaign Ikea had begun in 1993, and the whole thing was as groundbreaking as a whole as “Dining Room” was in particular. Created by the agency Deutsch, it featured not just one type of person, but wide variety of people: Adopting parents, a divorced mother, a young couple who had just gotten engaged, singles, and more. It may not have won any awards, but it has gone down in history as one of the industry’s most important campaigns.

We’ve looked at “Dining Room” here at Bustle before in our roundup of LGBT-friendly ads; but now that the commercial is officially 20 years old, it’s worth revisiting — especially in light of a recent interview on Ad Week. Patrick O’Neill, who worked at Deutsch during the ‘90s and was the art director for “Dining Room,” sat down with the site to chat about the ad’s creation. The whole interview is well worth reading, so head on over to Ad Week to take a peek; in the meantime, here are the moments of it I find most poignant.

The inspiration for the whole campaign was — surprise! — actual Ikea customers. “We would base a lot of our stories on the real people we would see,” says O’Neill. “We’d go to the New Jersey store — in Elizabeth — and because [the ads] were based on real people, we would watch, observe, and see how people use the product, who they were, what kinds of things they buying…. And there were a lot of gay couples there. We thought, Why don’t we do one?” Donny Deutsch, who had become chairman of the agency in 1989, apparently loved the idea; O’Neill says Deutsch “felt like it was a true representation of Ikea’s values, which is they’re always accepting of everyone.”

O’Neill also notes that at the time, he thought more ads would follow in the footsteps of “Dining Room” — but for some reason, it just didn’t happen. He posits that it might have been because brands were nervous about it because of the backlash the Ikea commercial saw: Op-eds, boycotts, bomb threats… to say that it was intense would be putting it mildly. But O’Neill does also think that although the spot itself was ahead of its time in the advertising agency, it also signaled the beginning of a shift in the country’s thinking overall: “In the years that followed,” O’Neill says, “not too long after — Ellen [DeGeneres], she came out. Melissa Etheridge came out. A lot of women came out at the time. So, I think the culture started doing it without it being commercials.”

I’ll admit that part of me finds a little discouraging that today, a full 20 years later, it’s still often deemed “controversial” to feature non-traditional families and other (read: not white, not straight) groups of people. But maybe the cultural payoff O’Neill and his team were hoping “Dining Room” would have is finally happening. Ads like Ikea’s aren’t isolated incidents anymore: Between Cheerios’ commercials featuring both a multiracial family and a gay couple and their adopted daughter, the Honey Maid “Dad and Papa” and #NotBroken campaigns, and even the Findus Pasta commercial that became Italy’s first LGBT-friendly spot in history, we’re starting to see them more and more. And that’s just as it should be. The world is a huge and varied place, as are all the people who populate it. Why narrow the view to just one type of person? Things get really boring, really fast when you do that.

Read O'Neill's complete interview at Ad Week — and for the curious, here’s the Ikea “Lifestyle” ad featuring the recently divorced mother that aired in 1993:

More like this
Demi Lovato Explains Why She's Now Using She/Her Pronouns Again
By Alice Broster and Radhika Menon
'Heartstopper's Yasmin Finney Wants To Be The First Trans Bond Girl
By Sam Ramsden
The Top Mistakes Scorpios Make In Relationships (& How To Avoid Them)
By Nina Kahn
Are Leo & Capricorn A Good Match?
By Kristine Fellizar
Get Even More From Bustle — Sign Up For The Newsletter