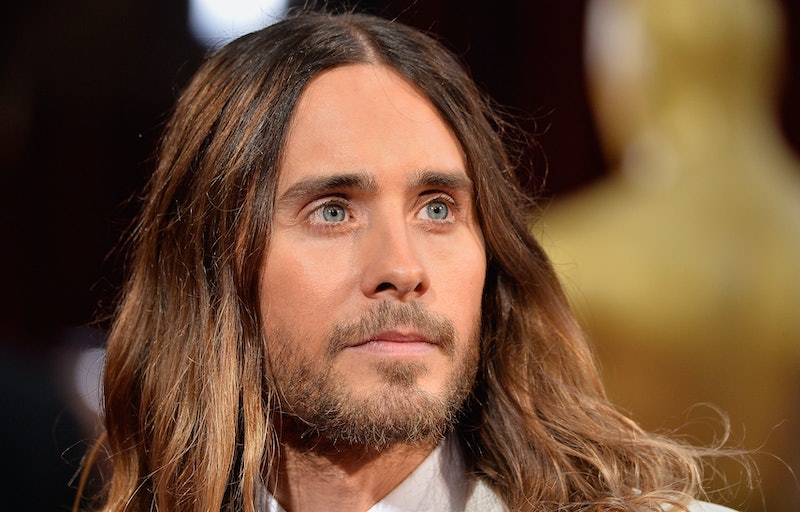 He may have played heartthrob Jordan Catalano on My So-Called Life, but how much of a ladies man is Jared Leto in real life? Apparently there are rumors that he is with someone new all the time. From Miley Cyrus to Lupita Nyong'o, no one is off limits from this gossip. I've decided to tackle the question once and for all: Is Jared Leto single? In an interview in March, he told a radio host, "I am, I am single, I'm officially single. I'm available for, all kinds of things." While it's way past March, it seems like the Academy Award-winning actor still isn't seeing anyone right now. In fact, if his personal Twitter is any indication, he's very much into doing his own thing and living life. I make this assumption based on his frequent selfies with uplifting quotes.

To further figure this out, let's take a look at some clues of whether he's single. First of all, there was this year's Oscars, where he took home the award for Best Supporting Actor. Leto brought his mother as a date. That is the most precious, adorable thing! He could either be the sweetest mama's boy, or he wasn't seeing anyone at the time. I'm gonna take it as both of these things being true — that he was single and he's an amazing son.

Then there were rumors of him dating two celebrities — both on very different ends of the fame spectrum. There's the elegant, classy Lupita Nyong'o and then there's the outgoing, in-your-face Miley Cyrus. However, these both seem to have just been crazy rumors. The Nyong'o dating rumors started when he jokingly referred to her as his "future ex-wife," and in February, Nyong'o appeared on Ellen and addressed the subject. When Ellen DeGeneres asked if she was dating Leto, Nyong'o said:

But I thought Miley Cyrus broke us up? That was the last thing I heard. But you know, it’s crazy because when I read these rumors they’re so detailed that even I start to question whether they’re true or not! I know that I believed them in the past but now I can’t believe them anymore.

Atta girl! She makes a good point that rumors are ridiculous and untrue. As for Cyrus, there were also rumors in February that the two of them were hooking up, since they "loved to talk about art and music." Well, even if that was true, there's no indication nowadays that they're together. And really, that sounded like the least supported rumor ever. Very vague!

Most recently, Perez Hilton posted an article titled "Margot Robbie Dating Jared Leto??" It actually appears to just be a click-baity headline, because the actual post refers to the fact that Margot Robbie may be playing the Joker's girlfriend in the new DC villain movie, Suicide Squad , which will reportedly star Leto. Way to add to the ridiculous dating rumors, Perez!

Now can't we just let Leto live his life and enjoy it? It seems he's doing just fine, single or not. His frequent selfies and quotes prove it!

Plus, who needs a girlfriend when he's got that cool monkey on his shoulder? He doesn't seem lonely at all.