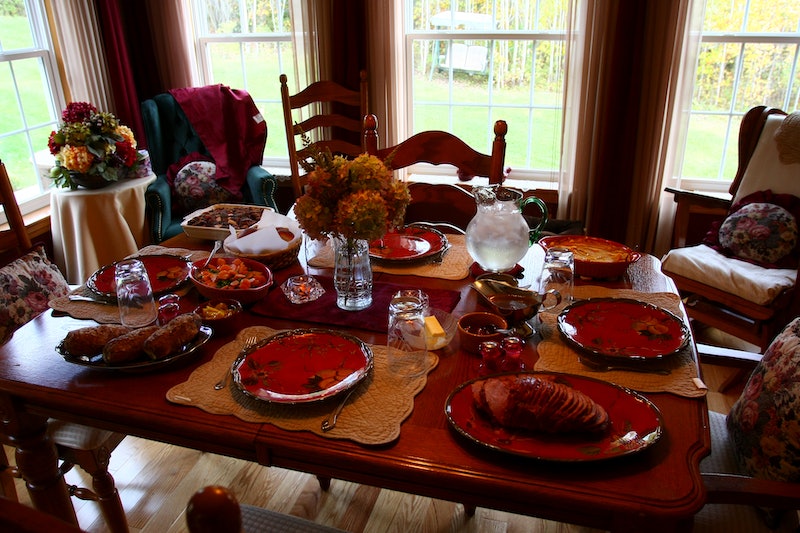 Lately, Thanksgiving has become the holiday everyone loves to hate. I keep hearing about all that's awful (and there’s quite a list). However, I think the fourth Thursday of November is great — basically a less stressful Christmas with all of the fun and none of the last-minute shopping. Instead of worrying about a gift list, I can focus on the 3Fs: family, food, and football. Without those to be excited about, though, I can see how the holiday could go from being a favorite to a nightmare of epic proportions.

If you’re firmly in the anti-Thanksgiving camp, I trust you must have good reasons. Maybe you spend the day avoiding your drunk uncle or hoping your aunts will stop bugging you about why you’re not married yet. Maybe you feel bad for that poor turkey. I’m not here to judge. Instead, I’m offering a solution: When you’re seated at the dinner table, wondering if this is the year that someone from your family will end up contributing to the nationwide ER rush, tune out the crazy and focus on a dinner you would actually want to attend. Imagine yourself celebrating Thanksgiving with one of your favorite literary families. It won’t get you out of the room, but it’ll at least be a great distraction.

Need ideas? Check out the literary families whose invitations I’d happily accept (and you should, too):

Let’s suspend disbelief here and pretend that the Weasleys, who are British, celebrate Thanksgiving. It shouldn’t be that much of a stretch, given that you’ve already accepted that they’re a family of witches and wizards. Dining with the Weasley family circa book two, Harry Potter and the Chamber of Secrets , would literally be magical. Imagine it: the twins would be busy playing pranks on Percy, Charlie would share stories about his adventures with dragons, and Mrs. Weasley would be casting spells in the kitchen. Harry, of course, would be visiting — Thanksgiving with the Dursleys? No thanks — so you’d get to watch poor Ginny awkwardly pine over him. Instead of a post-dinner nap, you could shore up the energy for a game of Quidditch, and then go back for the dessert round.

THE GLASS FAMILY, FRANNY AND ZOOEY

Although Franny and Zooey might communicate best over the phone rather than in person, having them under one roof, along with the rest of their family, would be better than an evening at the theater. With so many actors in the bunch, you’d be bound to witness dramatic moments. As eccentric as they all are, it would also be an utterly unpredictable celebration. It’s anyone’s guess as to whether you’d see the “sweet and loving” side of her children that Mrs. Glass hopes for or if she’d have to deal with their pricklier sides instead.

THE HERDMAN FAMILY, THE BEST CHRISTMAS PAGEANT EVER

The Herdmans put their own stamp on everything, even one of the oldest and best-known stories of all-time. If they can spice up an entire Christmas pageant with their insane antics, wouldn’t you love to see what they could do to a single dinner? After all, this is the family known for being “the worst kids in the history of the world.” If they’d lived in the Internet age, there would have been a hashtag just for them – #shitaherdmandoes. They’d make any holiday memorable; you’d just have to be prepared to fight them for a share of the jug wine.

When they’re not burning each other’s manuscripts, the March sisters are a great example of what a family that actually cares for one another looks like. Their Thanksgiving dinner might be a little sparse because times are tough, but their energy would make up for it. You could count on being entertained, either by watching one of their home theater performances or by going all out and joining in on the action. If you were really lucky, you could go out ice-skating on the river with Laurie, and hopefully no one would fall in.

There was a time when the Thomas-Brewers were the only blended family I knew. Comprised of Baby-Sitters Club founder Kristy Thomas, her three brothers, two stepsiblings, adopted sister, stepdad, and mom, the family would be a constant source of entertainment. You’d never know when to expect one of Karen’s pets to get loose, Sam to try to woo one of the BSC members, or Kristy to have one of her “big ideas”. Sure, there’d be occasional bickering, but for the most part, everyone would get along. On top of that, the house is supposed to be spectacular. It is always referred to as Watson’s mansion, after all.

THE INGALLS FAMILY, LITTLE HOUSE ON THE PRAIRIE SERIES

I’m getting off on a technicality here because the Ingalls family isn’t exactly fictional, but they make the cut anyway because the books are novels. In any case, a Thanksgiving celebration with the Ingalls family — whether in a dugout house or a claim shanty — would be amazing. Ma, Pa, and the girls would put together a fantastic, 100 percent homemade dinner. In fact, it couldn’t get much more farm-to-table than this; you know it would all be organic and that turkey would be free-range. Unfortunately, it would still have the Tryptophan that makes you sleepy, but Pa would take out his fiddle and keep the party going.

THE FINCH FAMILY, TO KILL A MOCKINGBIRD

I take food seriously, but at the Finch household, excellent conversation would be the most important thing on the menu. With Atticus Finch being a fountain of wisdom and his kids, Jem and Scout, being wise beyond their years, I guarantee you you’d learn a valuable life lesson or two. Plus, if you were lucky, you may get a peek at the mysterious Boo Radley next door. The only drama would be if an angry mob showed up at the door, but the chances of that seem fairly slim. Either way, dinner with the Finches would be totally worth the risk.

THE WALKER FAMILY, DIVINE SECRETS OF THE YA-YA SISTERHOOD

It’s easier to deal with dysfunction when it’s not your own family, so if that’s what you’d want to see, the Walker family could offer it in spades. Deep-seated resentment mixed with loads of bourbon would give you the makings of family fireworks. You could sit back and enjoy the show, all while indulging in some delicious Southern cooking. As a bonus, the members of the Sisterhood may stop in for a cameo, providing the chance to get involved in some Ya-Ya shenanigans.

Thanksgiving in a boxcar with four orphaned children ought to be enough to make anyone feel thankful for what they have. Hanging out with Henry, Jessie, Violet, and Benny would also be a lesson in being resourceful, seeing as those kids pretty much manage to take care of themselves better than I do. It’d also be exciting to have the chance to get your sleuth on because mysteries tend to follow the Alden kids.

Second star to the right and straight on till morning is where you’d find an eventful Thanksgiving in Neverland. (In a land where no one ever grows up, it seems like anything should go, including Brits celebrating an American holiday.) Between escaping from Captain Hook, trying out Tinker Bell’s fairy dust, and keeping up with the Lost Boys, the day would be the adventure of a lifetime. If we borrow a little from the Peter Pan-inspired film Hook, you should be warned that your dinner would be imaginary, but at least there would be one hell of a food fight.

More like this
The 20 Best Audiobooks To Fall Asleep To
By Aoife Hanna and K.W. Colyard
Conversations With Friends' Endometriosis Scenes Are As Brutal As It Gets
By Ivana Rihter
Watch The Emotional Trailer For Dolly Alderton’s 'Everything I Know About Love'
By Bustle UK
The Monster In 'The Essex Serpent' Was Inspired By A Real Local Legend
By Sophie McEvoy
Get Even More From Bustle — Sign Up For The Newsletter