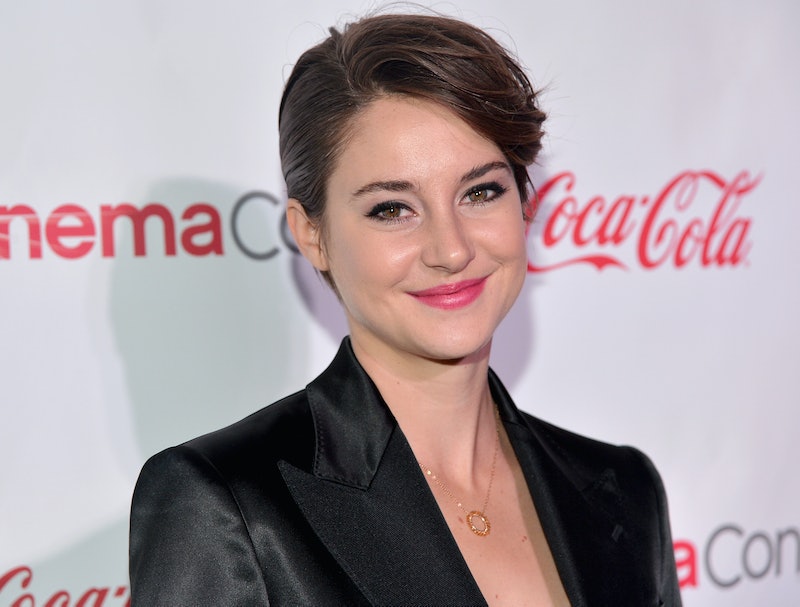 I was obsessed with Shailene Woodley before it was cool. I thought she was adorable back in the Secret Life of The American Teenager days, but I stopped watching that somewhere around the time I realized their "secret life" was nowhere close to mine (since mine mostly involved eating raw cookie dough and intensely journaling). But somewhere in between her performance in The Descendants and her casting and un-casting as Mary Jane Watson in the Spider-Man franchise, I had me some Shailene fever. The kind of fever that led to a rambly fangirl letter that got sent to some random address in L.A. and possibly got me in a database for stalkers. Despite the fact that she is several months younger than I am, I think she is one of the best role models in Hollywood, and I can't think of a better way to celebrate Woodley's twenty-third birthday than to declare to the internet some of my many reasons why.

Most of it is obvious: she is kind, well-spoken, and sticks to her guns. When she talks you can tell that she is the kind of person anyone could get along with, and when she listens you can tell that she is taking what people say to heart. And lately she's been showing the world just how versatile she can be now that she is arguably one of 2014's biggest breakout stars (thanks to the fault in them). Just in case you need more reasons to love her, let me take your hand and guide you through the world of all things Queen Shailene:

1. She Was Adorable From The Start

BABY SHAILENE, in the movie Replacing Dad circa 1999. Look at her rocking that bob.

2. She Has Mad Hair Game

3. No Matter What The Color

5. She Is Comfortable In Her Own Skin

Shailene Woodley has been pretty open with the media about not wearing make-up to big events when she can avoid it, and even opted to do The Spectacular Now completely make-up free.

6. She Brought Hazel To Life (And Emotionally Wrecked Us, But We Forgive Her)

Woodley actually petitioned for John Green to let her audition for the part a full year before the casting director agreed to see her—she loved the character of Hazel and the book The Fault In Our Stars so much that she wrote him a letter. He actually sent her a reply she called "beautiful" and "generous" saying that unfortunately he wasn't in charge of casting, but it must have done the trick to at least get her foot in the door!

7. And Delivered The Kickass Tris We All Know And Love

Seriously, Shailene is basically the heroine of YA Lit. If I eventually write a young adult dystopian novel I'm just gonna put her in it even if we're both forty by then.

8. She is committed to protecting the environment

Woodley grows and makes whatever she can herself, to the point where she brushes her teeth with clay and peppermint oil and harvests her own herbs. One of our staff writers tried living the Woodley life for five days, and props to her, because she survived a hell of a lot longer than I would have.

9. She Is A Total Goofball

In case you were wondering, that is 100% a picture of Shailene sporting a wig so she and co-star Ansel Elgort could go see The Fault In Our Stars at a movie theater incognito.

10. She Has Just As Many Doubts As You Do

There was a time that Woodley considered quitting acting because of all the pressure of being in the public eye, and thank god she didn't, because everything would have been terrible.

11. She Taught Us How To Pack Our Clothes

I still have no idea how a person can live like this. Seriously, she has no worldly belongings other than the ones she crams into a pack that fits into a carry-on bin. Where does she put all of her herbs?

12. She Gets Along With All Of Her Co-Stars

And it's stinkin' adorable.

13. And Is Clearly Very Supportive Of Them

14. She Has Her Own Unconventional Sense Of Style

Everyone else at the Met Gala this year needed to GET ON HER LEVEL.

15. She Is Graceful In The Face Of Disappointment

After her scenes were cut from The Amazing Spider-Man 2, she told Vanity Fair how made made peace with it: "OK, it makes total sense. I'm a pretty spiritual person, so I can just sit back and trust that everything happens for a reason, even if my ego doesn't like it."

16. Her priorities are clearly in the right place

17. She Is Refreshingly Upbeat

She told Interview magazine, "The second I wake up, I scream very loudly, "Good morning! Good morning!" And then I scream out, "Exciting day! Exciting day!" I feel like it completely sets the mood for the whole day."

18. She Is About To Blow Up The Screen Again

Insurgent comes out in 2015, followed up by Allegiant, which will, in true YA form, be released in two parts. This not only means more of Shai kicking ass and taking names all over post-apocalyptic Chicago, but tons more interviews with late night talk show hosts to dig into the depths of her coolness.

19. She Knows How To Treat Her Lady Bits

Shailene's vagina was briefly the most famous one in Hollywood when she shared part of her beauty regimen:

Another thing I like to do is give my vagina a little vitamin D. [Laughs] I was reading an article written by an herbalist I studied about yeast infections and other genital issues. She said there’s nothing better than vitamin D. If you’re feeling depleted, go in the sun for an hour and see how much energy you get. Or, if you live in a place that has heavy winters, when the sun finally comes out, spread your legs and get some sunshine.

When Woodley was offered the role of Tris in Divergent, she logically turned to the woman who had experienced the same phenomenon and reached out to Jennifer Lawrence over e-mail for advice. Not only are the two of them the queens of dystopian movies, but together they started a pixie cut revolution. I 'ship this friendship so hard.

22. She Rocks That Body Confidence, And Thinks You Should Too

23. She Is Basically Our Spirit Animal

HAPPY 23RD BIRTHDAY, SHAILENE! Here's to hoping your day is every bit as awesome as you.