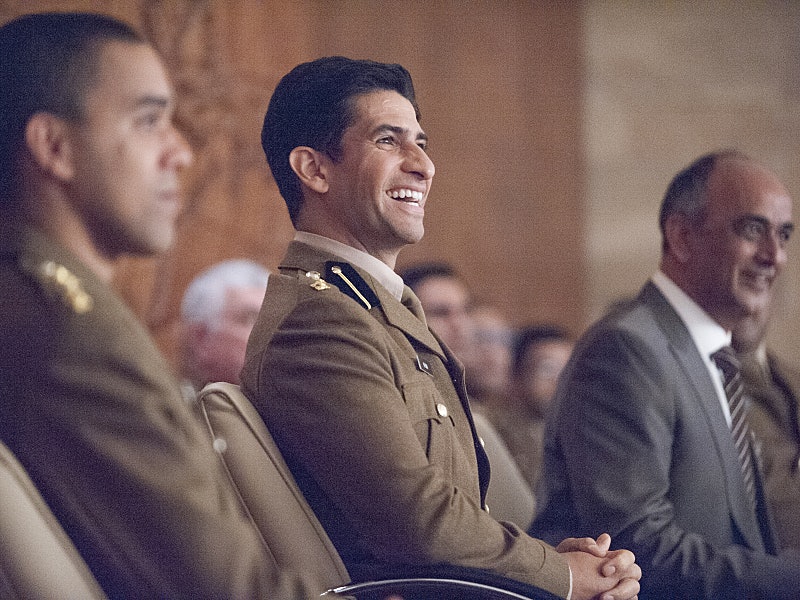 Homeland never fails to make the old adage of assuming (you know — the one about you, me, and asses) ring true. In the Nov. 16 episode of Homeland , "Halfway to a Donut," ISI agent Aasar Khan turned out to be good (probably). Now, I shouldn't go assuming again, but it seemed that Aasar was genuinely surprised at his fellow-ISI agent Tasleem Qureshi's shadiness. And since he planned a meet-up with Carrie where he revealed that Dennis Boyd was behind her drugging, I believe he is actually helping Carrie.

We're not 100 percent clear on Aasar's motives, but he appeared fairly concerned about what happened to Carrie. Although I at first thought Aasar was involved with Carrie's drugging, I now admit to being mistaken and think he had nothing to do with it. He knows his colleague Tasleem is up to something and we watched him piece it together when he saw Dennis and her talking at the embassy. He realizes the wrongs that are being committed between two organizations (ISI and the CIA) that are supposed to be cooperating together. And since ISI has repeatedly made it clear that Haissam Haqqani's demands are not the demands of the Pakistani government, it's a very substantial distinction to make that not all (and hopefully most) of the ISI is directly involved with terrorists. (Although we do know Tasleem and Farhad Ghazi are absolutely subverting the CIA's efforts.)

Can we talk about how good-looking these ISI agents are? Aasar Khan (Raza Jaffrey) and Tasleem Qureshi (Nimrat Kaur) are outrageously attractive in their roles as high-ranking members of the Pakistani government. (No offense to real government employees, but they take us a bit away from realism since in real life, people this good-looking tend to be, well, movie stars.) I actually have a friend who stopped watching Homeland in Season 1 for many reasons, but one was because of the actors being unrealistically attractive.

The reason I bring this up — besides to just compliment Jaffrey and Kaur on their genetics — is because it wouldn't be out of the realm of possibility for Aasar and Carrie to enter some sort of romantic relationship. Especially since they are both very appealing face-wise and such. But I don't think Aasar is helping Carrie because he's attracted to her. (That's not to say he isn't attracted to her — I just don't think that's his main motive.) He saw her at her most vulnerable — drugged and hallucinating that he was Brody. I think he realized how low someone in his organization stooped to mess with the American CIA (as Quinn said, they poisoned Carrie), and he wanted to right that wrong.

It's important to note that he gave up Dennis Boyd (the worst man on planet Earth) to Carrie, but not his colleague Tasleem, who appears to be the mastermind behind a lot of this. That's another reason I believe him. (And if we want to gossip about hypothetical romantic relationships, we could look at Aasar and Tasleem.) He's not giving away all the secrets of what's happening in the ISI — just the information on something really messed up that happened to his international coworker.

With only four episodes left in Season 4, I would not even buy an Aasar-Carrie romance at this point. And perhaps we should be more worried about the fate of Aasar than a potential pairing. We know that people who get close to Carrie and provide her with information (*cough* Brody and Aayan *cough*) often find themselves in trouble later. But I'm hoping Aasar's seemingly genuine nature just helps Carrie and Quinn track down the real bad guys here, and that he proves to be a trustworthy ally in the ISI.