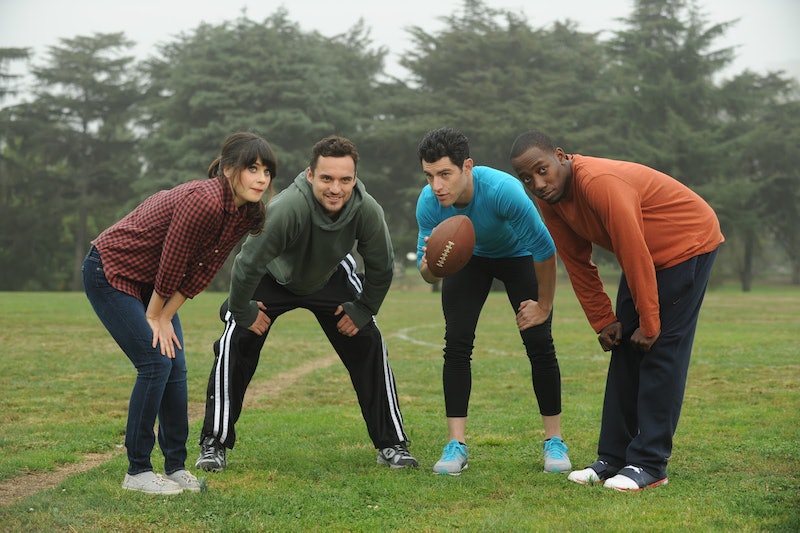 What is the deal with women who proudly proclaim to not have any women as friends? I mean, if that's your journey and you happen to end up surrounded by all dudes, and that's your thing, then I'm happy if you're happy. But can we please, please, once and for all, stop acting like a lack of female friends is something to be especially proud of?

Which isn't to say I don't love having guy friends. I definitely do. Growing up as a theater kid meant that I have always had friends that come from all walks of life. I've been friends with an even mix of men and women pretty much ever since I can remember, because I've never had all that difficult of a time relating to either gender. I will choose this moment to sheepishly admit that in a social psychology class in college we all took a "gender" test that determined how stereotypically "feminine" or "masculine" your personality is. (Yes, it is an insane premise for a test, but let's blow past that.) According to the test, the more positive your number, the more "feminine" you were, and the more negative your number, the more "masculine," with both of them meeting in the middle at an androgynous zero. Guess who was the only kid in the class to score a perfect zero??

Being the androgynous social butterfly that I apparently am, I've never been the kind of girl that only has guy friends. And to be clear, there is nothing wrong with that. There is no denying that guys are really fun to hang out with. I'm WAY more blunt with my guy friends than my girl friends, and oddly, feel a lot more comfortable making dirty jokes around them. But I don't know what I'd do with myself if all of my friends were guys. There are just so many perks that come with having girl friends. There are some holes that guy friends simply can't fill.

Somebody Always Has An Extra Tampon

While this is not important on a deep emotional level, on a superficial level, it TOTALLY is. You never know when the period fairy will strike, and you don't want to be that girl shoving toilet paper into her underwear and making some excuse about leaving and coming right back in the middle of a hangout because you're cruisin' to get some sanitary napkins.

They Understand What It Means To Experience Life As A Woman

Look, guys can "get" girls all they want, but the truth is, existing in this world as a woman is a dramatically different thing than existing as a man. There is a heap of shit put on us—expectations about our appearance and behavior, in all areas of our lives—that men simply cannot identify with. It's not that we sit around talking about it (at least, not all the time), but the comfortable awareness that you're with someone who can truly identify with the way you live, and how it feels to be in your skin...well, it's frankly irreplaceable. It's how we don't feel alone. It's how the pressure of being a woman, and the many injustices that still entails (and the many awesome aspects), become bearable.

No guy on the planet who has ever watched daytime television is going to tell you the truth about how horrible that dress looks. Whether we like it or not, it's a much bigger societal faux pas for men to say anything critical about women, even when we are specifically asking them to. With girls it is a lot more casual.

Girls Are Easier To Keep Up With

Whenever I hang out with guy friends, I always feel like total lamesauce because no matter how late I try to stay out, every single one of them will outdrink and outlast me. With girls, it is sometimes easier to say you're tired and call it a night with bad rom-coms and popcorn. That's not to say that all women enjoy bad rom-coms (they don't) or that some women don't rage hard (they do), but in general, women are just much easier at accepting you doing what you want to do, as opposed to men, who will peer pressure the hell out of you to "get on their level." (Of course, I also have girl friends who can drink me under a table, so jury is out on that.)

Girls Are More Prepared To Handle Your Tears In Stride

This is not a slight against my guy friends; They have been phenomenally kind and comforting in the few unfortunate times I have cried in front of them. But the thing is, I get the impression they're super caught off guard by my random displays of emotion and jump to the worst of conclusions, whereas girls are pretty much expecting it and know that sometimes crying isn't such a big deal. I'm not even saying that all girls cry more than all guys, or that women can't control their emotions, or that dudes don't know how to handle emotional situations—none of those cliches are of any interest to me. I'm simply saying that the dynamics within most man/woman friendships (at least in my life) don't lend themselves well to stuff like this. Sometimes you're just frustrated and your eyes start leaking. Woe is being a human. Your girls will always get it.

Honesty hour: my guy friends are WAY more dramatic than my girl friends, particularly in their romantic endeavors, and if any of you end up reading this, YOU KNOW WHO YOU ARE. I think, on the surface, girls are more vocal about their problems, but guys in my experience have this tendency to bottle things in and implode. But somehow, whenever these episodes happen, we think of it as an exception to the rule. I mean, either behavior shouldn't discourage you from being friends with guys or gals, but anyone who avoids hanging with girls because they're "dramatic" is off-base.

So Much Less Awkward Tension From Society

With guy friends, you're not the one creating the awkward romantic tension, but everyone around you is engineering it anyway. Friends, parents, that waiter who definitely thinks this is a date—you'll never escape it, even if you two are the most platonic, broiest of bros. But for whatever reason, when you're with girl friends, people make a lot fewer assumptions about your life and don't put weird pressure on you (which I find particularly ironic, because a significant number of my girl friends are gay or bisexual, so they easily could be on a date when they're with one of their same-sex friends).

You Don't Have To Deal With (As Many) Jealous Significant Others

I mean, yeah, every now and then my girl friends will have a girlfriend, and although it hasn't happened yet, I imagine it's quite possible that a girlfriend might get annoyed at me for hanging out with them. But even that case is significantly less likely than when guy friends have possessive girlfriends. When that happens, guy friends tend to fall off the map, and it sucks.

Picking apart your past romantic endeavors. The brutality of your cramps. Who Katniss should end up with in The Hunger Games (just kidding, I'm pretty sure we all have opinions about that). I mean, my guy friends are ridiculously cool about discussing this stuff with me anyway, but I always feel a little bit bad about it whereas with my girl friends I'm a total open book.

Unabashed, cupcake eating, The Notebook-crying, glitter-decorating frilly. And while my guy friends are fully aware that this is brewing just under the surface of any conversation we're having about the latest Marvel movie, they are significantly less likely to want to take place in the ritualistic nail painting and dancing around our entirely Hello Kitty themed kitchen. (I might have just said too much.)