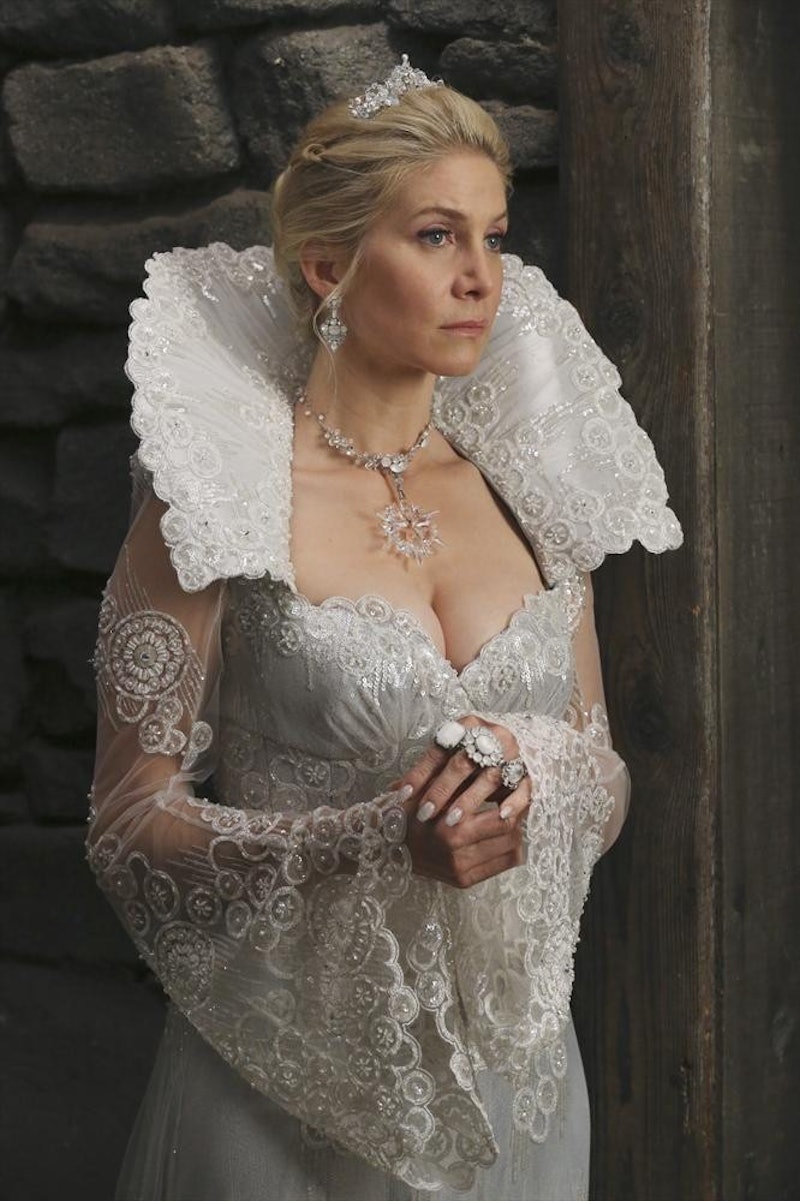 I think Ingrid, the Snow Queen, has to be one of my favorite Once Upon a Time villains. She's not tainting the memory of a childhood favorite like Peter Pan. She whispers instead of yelling, which is almost always more menacing. She's not connected to Cora, thank the good fairies above. She brings a philosophy about magic that we haven't seen yet on a show with so many magical characters, and I appreciate that. It's also interesting to see a villain who wants something so simple, yet does terrible things in order to achieve it. I wish Elizabeth Mitchell could be on the show forever! Wait, can she? Will the Once Upon A T ime winter finale end the Snow Queen? I certainly hope not, but TVLine spoilers about the "embarrassment of witches" coming to OUAT this spring do not bode well. Not cool! There's still a big missing piece to Ingrid's story! What went down at the foster home with teenage Emma? Something must have gone wrong, or Ingrid would not have erased all of Emma's only happy childhood memories. We need those answers before Mitchell takes her final bow.

The Dec. 14 winter finale title, "Heroes and Villains," doesn't reveal much, but the episode that precedes it might. "Shattered Sight" will air on Dec. 7 and it may have an obnoxious name, but it could have amazing implications. A spell that makes everyone in Storybrooke see the worst in each other is coming, so finally, we'll get some conflict out on the table. I have a hunch that even once the spell is over, everyone will have to deal with the truth they've just revealed. Serves them right. These fairy tale characters are way too nice, anyway. However, breaking the spell will probably mean either destroying or banishing Elsa and Anna's not-so-beloved aunt. How could that come about?

The Hook of the Matter

Sharpen your pitchforks and join me in my "Save Belle" campaign, will you? Rumplestiltskin is just descending further and further into a pit of moral depravity. Now, Rumple has Killian Jones' heart in his command and used it to have Hook take the Sorcerer's Hat. What is he gonna do with that hat? It would seem logical that he'd go after the Snow Queen and try to harness her power for Rumplestiltskin. Hopefully, the Spell of Shattered Sight won't cause Hook to go after Emma or Regina. Sucking Ingrid into the hat may get rid of Storybrooke and Arendelle's problems, but it would also mean saying goodbye to Mitchell.

Personally, I think it would be more interesting if all of the magical beings and individuals were released from the hat. Hey, I wonder if that's what brings about the "embarrassment of witches."

Ingrid doesn't have to die. Might I remind you that this show promised us a Frozen wedding? I haven't been the biggest fan of watching Disney fan fiction on my television screen lessthan a year after that movie was released, but this may keep Ingrid alive. She left Anna and Kristoff literally chillin' in Arendelle. If Hook absorbs her into the hat, or kills her, how will she rescue those two crazy kids? I guarantee that this show wouldn't tease a marriage ceremony in the first few episodes and then never show it to us. I think Chekov wrote a law about that or something. I suppose Elsa could unfreeze them herself. However, with the focus this half of the season has on giving villains happy endings, I have a feeling that Ingrid will be the guest of honor at the happy affair. Right behind Sven, of course.