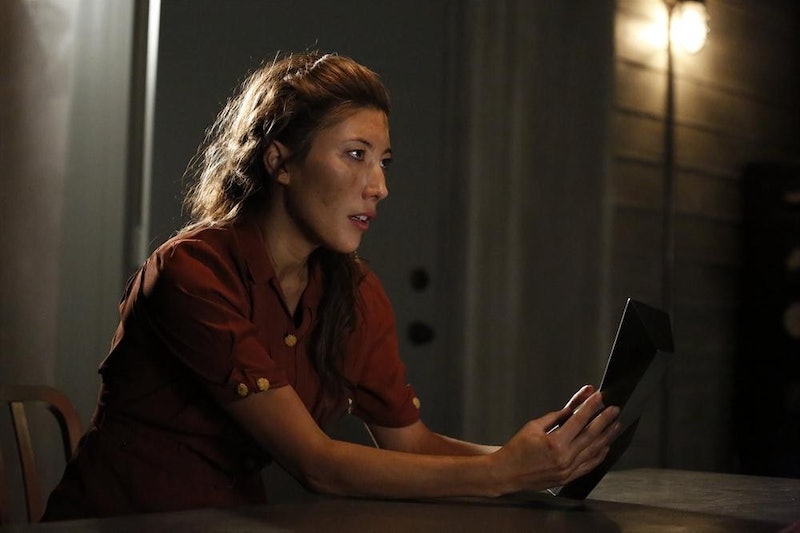 As the team races towards answers about Coulson and Skye in an unknown ancient city, fan speculation races towards the conclusion that Agents of S.H.I.E.L.D. is setting up the arrival of the Inhumans. In Marvel Comics, the Inhumans are super-powered individuals who get their powers from a substance called Terrigen Mists. Over time, their powers manifested on their own, but enhanced once they were exposed to Terrigen. They were created as a form of super solider, similar to plans we've seen in the Marvel movies and on Agents of S.H.I.E.L.D. by way of Project Centipede. How do we know that Agents of S.H.I.E.L.D. is setting up Inhumans? The clues have been coming since early last year.

That's right — Hydra isn't the only thing to be hinted at on the ABC series before it ever came to the big screen. Whether or not we'll see the big Inhuman players such as Medusa, Thane, Black Bolt, and Maximus remains to be seen. Who knows? Maybe we've already met them. We still don't know Skye's name, as her father likes to angrily point out. Stop yelling at people for calling her Skye and just tell us her name, Doctor Dad! How difficult is that? The Inhuman presence is only getting stronger, so let's round up the recent clues and the older hints you may have missed.

Widely speculated to be the Inhuman city Attilan, this mysterious location is the Inhuman home and headquarters. It has a temple, which Skye's Dad talked about being at the city. Plus, a Netflix rewatch of Season 1 will reveal that the alien map was teased as early as the fourth episode of the series, "Eye Spy." The image was given over to S.H.I.E.L.D. to investigate, which we now know probably means Hydra.

The emphasis that Skye's Father is placing on family could be more than just ominous — it could be a clue. While the Avengers are a team and the Guardians of the Galaxy are a found family, the Inhumans are a royal family. They are blood relatives. We've now met both of Skye's parents (am I the only one hoping that Skye's mother could appear on Agent Carter ?) and they both have some sort of superhuman ability. Are they royals as well?

The "Blue Angels" Are Kree

It was recently confirmed that the blue alien on S.H.I.E.L.D. is Kree. This race of alien in Marvel Mythology created the Inhumans. Now that we know they are on the show, the rest can be expected to follow.

Plain and simple, there is a planned Inhumans film. We don't know the details of which characters the film will focus on yet, but as Agents of S.H.I.E.L.D. has tied itself to every MCU film thus far, it would be cool for them to get ahead of this film's subject matter four years before its release.

The Girl in the Flower Dress

Would you believe that Inhumans have been in the works since the fifth episode of Agents of S.H.I.E.L.D.'s first season, if not earlier? You better believe it. When Raina was first introduced, she met a man who had the ability to create fire out of thin air. That ability had just manifested one day and Raina wanted to increase it. That's exactly what Terregin Mists do, never forget! Now, it is rare in the Marvel Cinematic Universe for humans on Earth to display superhuman powers without a scientific or pseudoscientific explanation. Steve Rogers was injected with a super soldier serum. Bruce Banner was mixed up in gamma-radiation after trying to recreate the effects of that same serum. Hawkeye, Black Widow, and Iron Man just utilize technology. Thor is of Asgard. The Extremis project in Iron Man 3 was a similarly scientific effort to create the supernatural. So this character, named Chan Ho Yin or "Scorch," is an anomaly.

In the comics, Scorch is a mutant. On the show, he believed his powers to be a "miracle," while Raina said that she believed he had been chosen. There, right there! The concept of being "chosen" sounds similar to what the obelisk or "diviner" does, according to Skye's father. In addition, "miracle" was the word a Hydra officer used to describe the captive Scarlet Witch and Quicksilver in the Captain America: The Winter Soldier post-credits teaser. Since Disney Marvel can't call those characters "mutants" or X-Men in this franchise, it has been speculated that Wanda and Pietro Maximoff will be Inhumans instead.

The character that FitzSimmons went up against in Season One and was a hot (no pun intended) commodity for Hydra to collect in Season 2 is an Inhuman hybrid in the comics. How many Inhumans are hiding in plain sight?

The Dec. 9 episode is titled "What Will We Become" — Raina's mantra. This makes me believe that the aftermath of the Temple will result in several characters getting new powers. How fun!