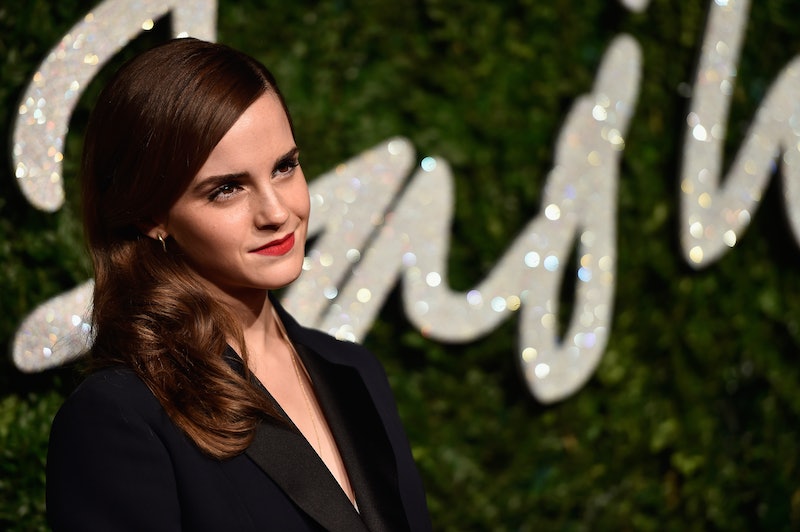 Imagine not only receiving a major award, but having it presented to you by a member of One Direction. Even if you're not a huge fan of the British boy band, you've gotta admit that's pretty cool. You'd probably even be a little flustered, right? While this may not happen to us normal folks anytime soon, this is exactly what went down when Emma Watson received a British Fashion Award on Monday night. Harry Styles presented Watson with her award and not only did she temporarily get flustered, but the Internet went nuts too. Fans immediately began posting photos of the two together and tweeting about how they'd make an amazing couple.

Before you begin making an "I <3 EmRy WatYles" t-shirt, hang on. First, because that doesn't sound like a very cute couple name. (Perhaps HarMa StySon? Hmm, still no.) Secondly, Emma Watson is already in a relationship. Yup, last we checked, the 24-year-old is still dating Matthew Janney, an Oxford student and rugby player. Let's not wish any ill will on a pre-existing pair. The two seem to be really great for each other. Meanwhile, Styles himself is in the middle of rumors that he flirted with Kendall Jenner that same night, or that he's still secretly in love with Taylor Swift. Chances are that neither of those are true.

While EmRy WatYles isn't going to get together anytime soon (or it sure seems unlikely), Watson did acknowledge what a magical moment meeting Styles was. Watson told the crowd, "Harry Styles just said the words, 'He for She,' so that's really cool." Really cool, indeed. Then again, this also shouldn't come as a surprise, since back in September, Styles posted a tweet showing his support for Watson's #HeForShe campaign.

Ugh, so perfect! Speaking of perfect, while this "couple" may just be an Internet fantasy, let's take a look at photos of Watson and Styles together at the British Fashion Awards. They sure are adorable, even if they just remain friends.

Honestly, I think the best part of this whole thing is that fans discovered the irony of Emma Watson hanging with someone named Harry. Sure, it's not Harry Potter, but that didn't stop them from opening the Chamber of Jokes. (That was my poor attempt at a HP joke... sorry!)

More like this
Harry Styles Helped A Fan Come Out As Gay In Dramatic Fashion At His London Show
By Jake Viswanath
Who Is Betty Who Dating? The Australian Singer Is Married To Her Tour Photographer
By Radhika Menon
Cardi B’s New Single “Hot Shit” Features Kanye
By Alyssa Lapid
You Might Want To Rewatch 'Elvis' For This Britney Spears Easter Egg
By Grace Wehniainen
Get Even More From Bustle — Sign Up For The Newsletter