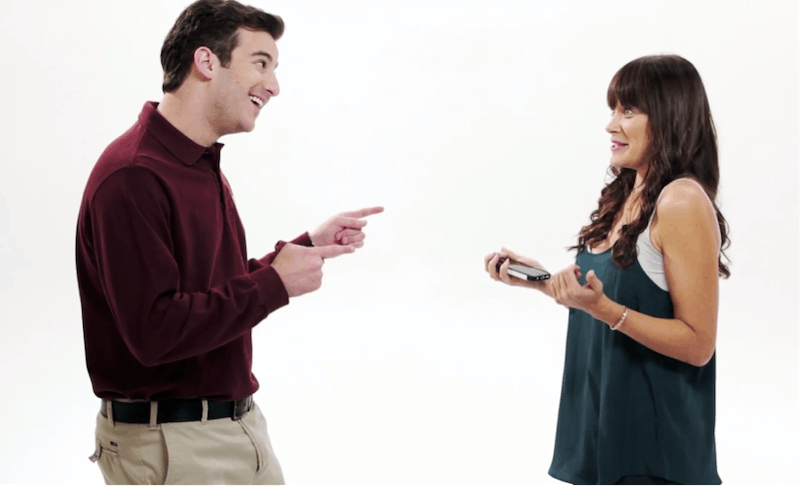 Approximately a year and a half ago, I downloaded the Tinder app, which lasted a record-setting three hours on my phone before I deleted it. I logged on, swiped right on the two guys I recognized from my real human life (because I thought I was hilarious like that), and then logged off before anyone could even bother to talk to me. It was all very anti-climactic (the Lifetime movie is slated for release next year), because even without much field experience, I knew I personally wasn't interested in the fundamental premise behind the creation of Tinder: To hook up with as little insight into who another person is, based pretty much exclusively on looks and location. These intentions are hilariously captured by this parody video that turned Tinder into a spoof on an eHarmony ad.

I haven't seen an eHarmony ad like this air in awhile, but anyone who had access to a television in the last decade will remember the forced laughter/color-coded outfit jamboree/total awkwardsauce of the commercials that aired with "matched" couples side-by-side as they petted each other and praised eHarmony for bringing them together. The Tinder version pokes some well-deserved fun at the app, with choice quotes from happy couples like, "I don’t think anyone should ever give up on the idea of a perfect one night stand,” and, "You never know who the next person you swipe might let you do to ‘em," all said with that same vaguely smug and happy intonation that the eHarmony people always used back in the day.

Although it's true that many people have actually found love on Tinder (including some of my close friends, although some are reluctant to say so), the app has become notoriously known as the epicenter of hookup culture, a reputation that is only aided by ultra-progressive inventions like the "Auto-Liker," which will swipe right on Tinder for you (to spare you all the carpal tunnel you might get online dating otherwise, I presume). As much as we make fun of it, though, it is clear that it is a phenomenon that agrees with us: Stidies have shown that millennials spend more time on Tinder than on Facebook.

So yes, there are some undeniable grains of truth in this parody video, confirming what we pretty much already knew: 95% of the time, Tinder is GREAT for finding hookups but useless for finding a legitimate match (that is, unless you’re trying to find a fellow Serial fan, in which case you might be in luck if you play your cards right). Here's the parody video below:

More like this
9 Alternatives To The 3-Day Texting Rule In Dating
By Ginny Hogan
How To Use The Crying Filter On Snapchat, TikTok, Instagram & More
By Emma Carey
The True Meaning Behind Each Hand Emoji
By Bustle Editors and Emma Carey
TikTok’s “5-9 Routine” Trend Is Here To Boost Your Productivity
By Courtney Young
Get Even More From Bustle — Sign Up For The Newsletter