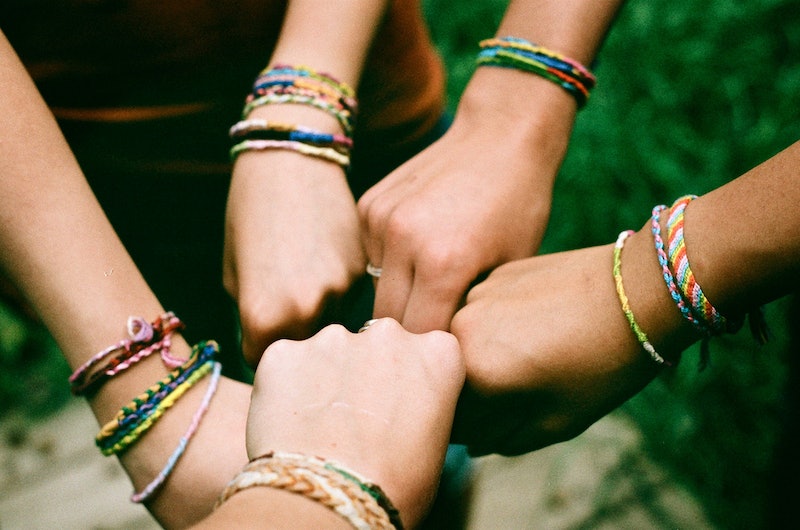 Most kids' books are saddled with seemingly dueling desires: to entertain the often-short attention spans of the younger set while also teaching them some kind of valuable life lesson that they can adhere to long into adulthood. It’s no easy feat to combine those two elements — entertainment and education — but the very best books, the enduring classics of the literary world, do it with ease.

Think of it this way: Although you might not have finished up Anne Brashares’ Sisterhood series and immediately thought, “I want to go hug my friends and talk to them about how important our friendship is to me and then also wear the same pair of magical pants!” you probably did just that.

It’s no surprise that so many kids' books focus on building and maintaining friendships, reminding even the littlest readers how important it is to be nice to people, listen to their needs, and make a BFF for life (or, as the case may be, forever). These books probably helped shape you into the kind of friend you are today — are you a Sarah Crewe or a Hermione Granger? — but if you’re looking to remember what it means to be someone’s actual best best friend, they’re more than worth a revisit (even if you’re going to well up, well, probably a lot).

The Sisterhood of The Traveling Pants series by Ann Brashares

Brashares' immensely popular YA series now spans five books, two movies, one magical pair of pants, and more than three decades of time (2011's Sisterhood Everlasting quite memorably picks up ten years after the friendship-bound sisters embark on college-aged adventures after having been pals "since birth"). But its message about the importance of strong friendships has never wavered. Bound by those magic pants — and whole years of friendship — Lena, Tibby, Bridget, and Carmen spend Brashares' series learning how to maintain relationships, stay true to each other, and value loyalty above all else (including a really cool pair of dunagrees). You'll want to hug all your besties after reading these books, and you'll want to make sure you're always there for them, jeans or no.

More magic! Like Brashares' series, Rowling's beloved tales of the Boy Who Lived, He Who Must Not Be Named, and everyone else in their mixed-up Muggle- and wizard-filled world uses magic to drive its narrative, but the real heart of the story is about friendship, love, and respect. Orphaned Harry might never find new parents to take the place of Lily and James, but what he does find is makeshift family fashioned out of loyal and loving friends, especially Ron and Hermione.

Bridge to Terabithia by Katherine Paterson

Paterson's heartbreaker of a story similarly uses "magic" to approximate the joy of a closely-held friendship. Young Jesse and Leslie are outcasts from the rest of the world, but the strength of their mutual affection and imagination helps the duo literally build a world where they can rule. The book may pack a tearjerking twist, but its lessons about sympathy, empathy, and loyalty help it end on high, hopeful note.

Burnett's heroine, Mary Lennox, might start off as a spoiled, selfish brat, but the power of friendship and family help transform her into a sturdy and dependable pal. Mary isn't the only one changed by loving pals (and, let's face it, beautiful blooms and a ton of fresh air), and her very own cousin Colin is actually physically healed by the dedication of both Mary and their sweet pal Dickon. If this is what friendship can do, anything is possible.

Burnett's ability to write sassy, smart female characters who overcome big time adversity was on full display before she put pen to paper on The Secret Garden, thanks to her charming 1905 novel A Little Princess. Unlike Mary Lennox, Sarah Crewe is already a generous and sweet child before she's felled by apparent orphanhood and abject poverty, but that only helps her maintain her sunny outlook in the face of major pain. Sarah's dedication to giving to her friends — even when she has next to nothing of her own — is an enduring and inspiring lesson about life's real riches: friends who make every day better.

Funny and flinty and really kind of weird, Sachar's Holes is also about friendships that are strong enough to run through entire bloodlines. Like most of its ilk, Holes is all about the power of kid friendships threatened by evil-doing adults, and how they can help even the most insurmountable challenge — like digging never-ending holes and hiding from gross lizards — have value.

The Boy in the Striped Pyjamas by John Boyne

There's zero chance you'll get through Boyne's book without crying your eyes out — probably a few times — but the tearjerker is a lovely historically set look at the bonds of friendship and how to stay loyal, giving, and empathetic even when everything is stacked against you.

The Perks of Being a Wallflower by Stephen Chbosky

Being a teenager is hard enough, but being an awkward and unsettled one is almost impossible. Chbosky's sensitive and relatable novel sticks us right inside the head of young Charlie, a kid so desperate for pals that he's never entirely sure how to act when he finally gets them. Few novels so perfectly capture the pain of loneliness and the joy of having that barrier broken. If nothing else, Wallflower will make you want to befriend the next shy outcast that crosses your path — and listen to tons of cool jams with him.

Much like Harry Potter, Anne Shirley reconstructs her missing family by gathering together a coterie of beloved pals and sticking with them for the rest of her life. Anne's loyalty is one of her very best traits, and her ability to stick with the ones she loves through anything inspires everyone around her. The girl gave up a prime scholarship, for goodness sakes!

Divine Secrets of the Ya-Ya Sisterhood by Rebecca Wells

Wells' story seamlessly blends both family and friendship, using the eponymous Ya-Ya Sisterhood to help the estranged Walker gals (mother Vivi, a Ya-Ya, and her daughter Sidda) heal up years of misunderstandings and mistakes. Sometimes, it's your friends that know you the very best, and they're the only ones who can help you in times of trouble, and the Ya-Yas do that — and do it well! — throughout the novel.

The Giver by Lois Lowry

Being a good friend often means tapping into your deepest empathy wells, and Lowry's post-apocalyptic parable is all about doing just that — even when it hurts.