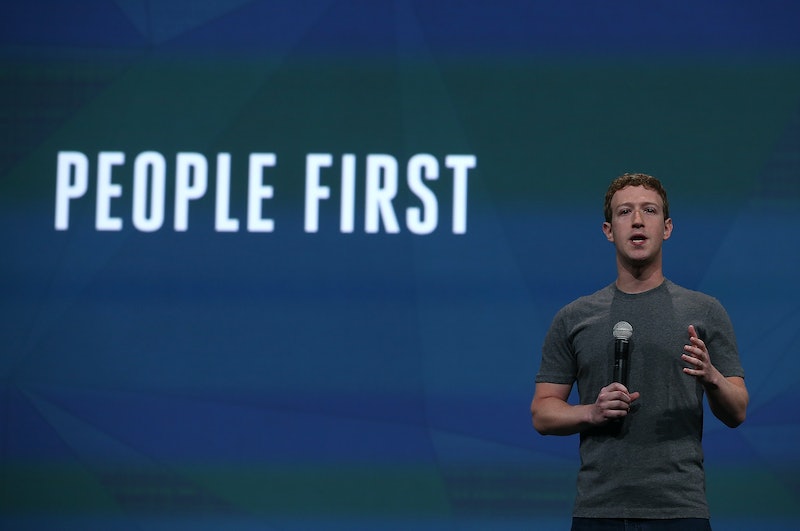 For his New Year's resolution, Facebook founder and CEO Mark Zuckerberg has taken on the worthy task of reading a new book every two weeks. Zuckerberg's new Facebook book club will "meet" on his Facebook page A Year of Books, discussing the selected books via comments on the initial post naming the new book. But Zuckerberg isn't going to select just any New York Times bestseller. He aims to enrich his knowledge and cultural understanding with a certain kind of book. As he writes on his own Facebook page:

My challenge for 2015 is to read a new book every other week — with an emphasis on learning about different cultures, beliefs, histories and technologies ... I'm excited for my reading challenge. I've found reading books very intellectually fulfilling. Books allow you to fully explore a topic and immerse yourself in a deeper way than most media today. I'm looking forward to shifting more of my media diet towards reading books.

The A Year of Reading Facebook page notes that "suggestions for new books are always welcome," and we're taking that to heart. Looking through Zuckerberg's own Likes when it comes to books, there's a lot of nonfiction, covering topics ranging from Jay-Z to Andrew Jackson, and even a bit of young adult and children's literature. But what there isn't a lot of is women.

We don't know what books Zuckerberg will choose this year for his book club, but we do hope it will include some great women's voices that can talk about the new cultures, beliefs, histories, and technologies that he's hoping for in his reading. In just in case he's not sure where to start, we can recommend 13 books, both fiction and nonfiction, by women writers that will fit the bill just perfectly.

From Zuckerberg's Facebook page, it's clear to see that he tends to veer toward nonfiction over fiction. And in the spirit of this book club challenge — particularly, books that emphasize learning about new cultures — the internationally renowned Ayaan Hirsi Ali's powerful memoir should fit right in. As the daughter of a Somalian politician, Hirsi Ali grew up believing in the Muslim Brotherhood, endured the brutality of civil war, female mutilation, and beatings, and escaped an arranged marriage before becoming one of the most outspoken believers of Islam reform, free speech, and the rights of women. Needless to say, Zuckerberg could learn a whole lot here.

The Book of Unknown Americans by Cristina Henríquez

Alhough The Book of Unknown Americans is a fictional story of a Panamanian boy and a Mexican girl living in an immigrant community in Delaware, it interweaves true accounts of Latin American and Hispanic immigrants, focusing on how this experience has impacted their lives in alternating chapters — stories any American citizen, Zuckerberg included, need to hear.

The juxtaposition of extreme wealth (which should be no stranger to Zuckerberg) and extreme poverty is the backdrop of Roxane Gay's An Untamed State . The privileged Mireille Duval Jameson is living the sweet life in Haiti, but that all changes when he is kidnapped and ransomed by armed men. Her father refuses the pay the ransom, and it's Mireille who pays the price from the men who hate every thing she represents for their country, which they feel has betrayed them. The story is agonizing and horrifying, but it has a unique perspective on the idea of privilege that should be told.

Women and men, especially men who find themselves in a particular place of power, should all read Rebecca Solnit's essay Men Explain Things to Me . Zuckerberg, who presumably must speak to men and women of all backgrounds in his job role and as a public speaker, could always learn more about male-female interactions and the troublesome theory about how men tend to both wrongly assume that they know things and that women do not.

A Tale for the Time Being by Ruth Ozeki

Ruth Ozeki's A Tale for the Time Being has so much of what Zuckerberg is after for his book club: history, different belief systems from his own (in this case, Buddhism), and science (quantum physics!). The novel's tale of 16-year-old Nao from Tokyo who discovers her great-grandmother's diary and Ruth, who lives on a remote island across the Pacific who discovers debris from the 2011 tsunami wash ashore, has so much to say about these three things, but also about what it means to be a human.

Persepolis: The Story of a Childhood by Marjane Satrapi

With Ender's Game on his list of Liked books, Zuckerberg has shown that he doesn't shy away from the YA section. (Hooray!) Now we can all get him into YA graphic novels, if he isn't already, with Persepolis , Marjane Satrapi's hilarious and totally heartbreaking memoir that recounts her time growing up in Tehran, Iran during the Islamic Revolution. It should also suit his love of nonfiction history books.

Considering his practically immeasurable success, I don't think Zuckerberg needs any help running a business. However, someone else's experiences and perspectives should always be interesting to any businessman or woman. The founder and CEO of Nasty Gal, Sophia Amoruso wrote a feminist take on starting and running a successful business with #GIRLBOSS . Some of her advice? "I have three pieces of advice I want you to remember: Don’t ever grow up. Don’t become a bore. Don’t let The Man get to you. OK? Cool. Then let’s do this."

Half of a Yellow Sun by Chimamanda Ngozi Adichie

Although fictional, Chimamanda Ngozi Adichie's Half of a Yellow Sun is entirely honest about its depiction of Africa in a real-world sense outside of these characters. The Orange Prize for Fiction winner talks about class and race in Nigeria and across the continent, the after-effects of colonialism, and the divisions that spring up according to ethnicity. In with the backdrop of the bloody Biafran War in 1960s Nigeria, it's heartbreakingly real.

No doubt Zuckerberg is aware of this one, the National Book Award Finalist and Man Booker Prize shortlist entrant for 2013. But The Lowland should suit Zuckerberg's desire to delve into understanding global histories and different cultures with its epic, yet intimate, stories that jump across geographies, both India and the United State, and generations.

Pulitzer Prize-winner Katherine Boo spent three years in the slums of Annawadi, in Mumbai, India, where families lived in tin-roof huts to write her groundbreaking book Behind the Beautiful Forevers. If Zuckerberg wants a peek into other cultures, this book will get you right up close to real-life impoverished families (or the "have-nots") in India, filled with strong men and women who are hopeful and striving toward a better life.

Packing for Mars by Mary Roach

Mary Roach is the queen of fun, exploratory nonfiction and Packing for Mars certainly lives up to the standards she has set for herself. Described as depicting the "curious science of life in the void," the book may hit on some of Zuckerberg's passions for new areas of science and discovery. And because he certainly has the dollars to be aboard one of those soon-to-be-real passenger trips to Mars, it could also just be a helpful companion for his actual life.

State of Wonder by Ann Pachett

State of wonder, indeed, Ann Pachett. Zuckerberg may appreciate the science focus of State of Wonder , as well as its descriptions of a journey into a not-often traveled world, the Amazon rainforest. And it's about innovators who struggle with moral complexities that may resonate with the Facebook founder.

I Know Why the Caged Bird Sings by Maya Angelou

I'm adding this one just in case Zuckerberg hasn't read the Maya Angelou classic. And if you haven't, Mark, this would be a straight-up excellent place to start. Millions of people can tell you why.

More like this
10 Must-Read New Books Out This Week
By K.W. Colyard
30 Books To Read This AAPI Heritage Month
By K.W. Colyard
Zosia Mamet Opens Up About Her Eating Disorder
By Zosia Mamet
Watch The Emotional Trailer For Dolly Alderton’s 'Everything I Know About Love'
By Bustle UK
Get Even More From Bustle — Sign Up For The Newsletter