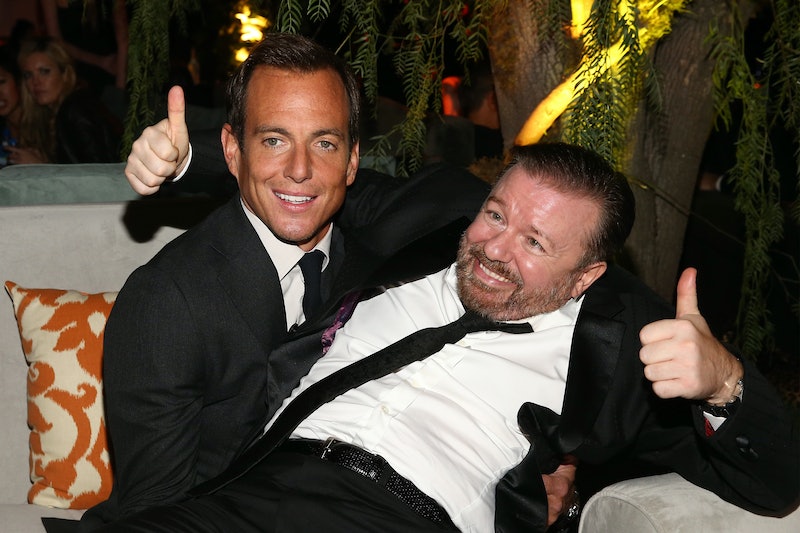 In efforts to make our Monday's less dismal, we should continue to bask in the shiny glow of last night's Golden Globe Awards. Let's face it, it was chock full of inspiring moments for women (Maggie Gyllenhaal! Patricia Arquette! Amy Adams! ) and the transgender community (all the Transparent wins) AND it had a special guest appearance by Prince. But more than anything, though, the Golden Globes was a barrel of fun, which leaves me to wonder: Who was really capitalizing on the night, the Americans, or the Brits?

The thing is, Hollywood is pretty emblematic of the American dream to become rich and famous, and a celebration like the Golden Globes might as well be give out Big Macs plated with gold. But if you really look closely at this particular show, all the British people were playfully one-upping the Hollywood hierarchy left and right. And that's quite a feat when we had the American Queens of Comedy at the helm of this operation.

Having a hard time believing it? Well here, presented for your consideration, is a quick recap of the Golden Globes silliest moments, and the lowdown on how the British tried their hardest to overtake it.

Our favorite fantasy gal pals started the night off by satirizing the entire film industry they were celebrating. Not only did they pepper their opening monologue with feminist zingers (“Boyhood proves there’s still great movies for women over 40 as long as you’re cast when you’re still under 40") but they went in for not one, but two Bill Cosby jokes. Impressive. However, as many noted, the Golden Globes suffered from a severe dearth of Fey and Poehler post-monologue, which is simply unforgivable.

...but Ricky Gervais Surreptitiously Took Swipes at Everyone in Hollywood

Former Golden Globes host Gervais does comical bitterness best, and it was a blast to hear him side-swipe everyone in the room. He's not even going to start talking about the terrible, immoral things Katie Holmes had to do to get here, you know? While it didn't have the same bold impact as the well-curated Fey and Poehler jokes, Gervais' casual delivery invoked perpetual giggles. Bonus points for doing it with a drink in hand.

A collective eyebrow raise occurred when John Legend won the award for best original song for Selma and his overjoyed supermodel wife made this face. It quickly spread throughout Twitter and even Teigen took to social media to poke fun at herself. While we have to commend her for playing along, the Teigen Face still doesn't have the same impact of Angelina Jolie's leg (never forget Jim Rash parodying that on stage). Besides, she has about seven more faces to go if she ever wants to catch up to all the Leonardo DiCaprio Award Season memes.

Does it have the long-staying (long-staying being like, three years, tops) cultural resonance of a meme? Not necessarily. But while Teigen has achieved momentary fame from simply making the wrong expression at the right time (or vice versa), this is just another reason Cumberbatch is a beloved Tumblr icon. Honestly, pregnant fiancee be damned, Cumberbatch just gave the Cumberbitches another thing to obsesses over. Plus, it's the ultimate power play: if you're going to photobomb anyone, it is a hardcore move to take on Streep, the unofficial Queen of Hollywood who's gone to so many award shows that she's just taken to attending them wearing glasses. Here's hoping she breaks out her Snuggie at the Academy Awards. In any case, Cumberbatch wins this one for his bold move.

Clooney and his eternally grey hair is an American institution, there's no denying that. However...

Rest assured, though, it's the British-based, stupendously glamorous Amal that won the the day, receiving a big shout-out from the OG Clooney. Snagging her husband was merely a secondary prize for being so independently accomplished professionally or otherwise (which of course Poehler and Fey pointed out early on in the show). However, let's not diminish this triumph when the last two Golden Globe Awards played out like this:

I'm going to have to tip my hat to the British for winning the Golden Globes (regardless of whether they, you know, actually won Golden Globes). Oh well. Maybe we can dominate the Oscars.

More like this
'Doctor Strange 2' Star Benedict Cumberbatch’s Net Worth Is Not An Illusion
By Hugh McIntyre
Remember When Benedict Cumberbatch Announced His Engagement In A Newspaper Ad?
By Hugh McIntyre
Amanda Seyfried Reflects On 'Mean Girls' & "Gross" Remarks That Men Made After It
By Jake Viswanath
'Doctor Who’s New Star Is Already Huge On TikTok
By Maxine Harrison
Get Even More From Bustle — Sign Up For The Newsletter