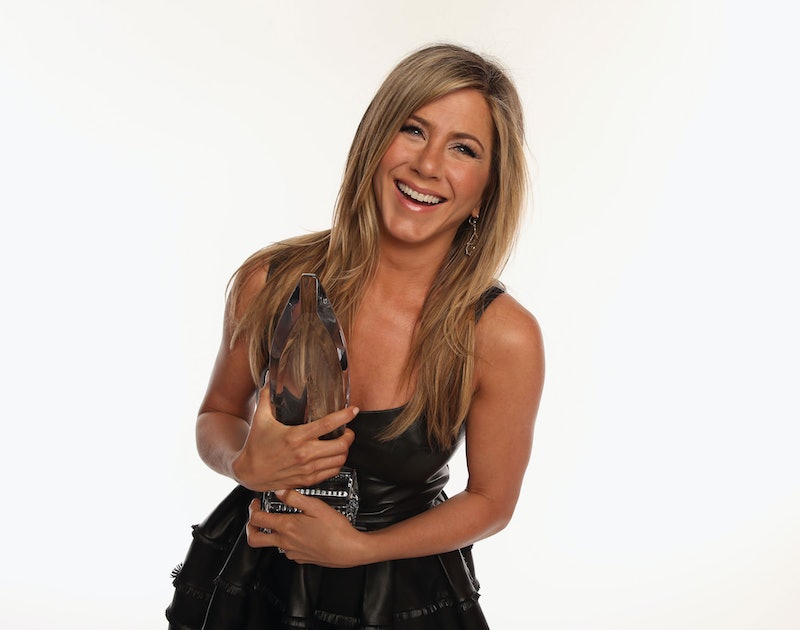 If you thought you'd never see the day when Jennifer Aniston would be hopeful for an Oscar nomination, well, you can go eat crow. The Cake actress is being lauded for her performance in the drama about Claire, a woman with chronic pain who becomes enthralled with the death of a girl in her support group, played by Anna Kendrick. Aniston was nominated at the Golden Globes for Best Actress in a drama, and though the statue went to Julianne Moore for her performance in Still Alice, Aniston was definitely a worthy contender.

It's strange to think that 2014 saw Aniston in both Cake and Horrible Bosses 2, but Hollywood is a weird town where anything can happen. It's still anyone's guess whether or not Aniston will get an Oscar nomination for her role in Cake, and there's a lot of "will she, won't she" talk. Whether she does or doesn't, though, this movie could be Aniston's version of a McConassaince, especially since both babes come from a background of mostly bad rom-coms.

But if Aniston isn't on the roster for Best Actress hopefuls at the Oscars, here are some other categories she could be nominated for and sweep:

This one is pretty obvious, but it seems like everyone was surprised and shocked, pleasantly of course, with the depth of character Aniston brought to the screen in Cake. "Raw" is the word most associated with her Claire, and it's a blow to anyone that underestimated her acting chops just because she starred in We're The Millers.

Aniston has used the power of her celebrity to raise awareness for several great causes, including St. Jude's Children Hospital and Doctors Without Borders. In 2007 she was awarded a GLAAD Vanguard Award for raising visibility of the LGBT community in film.

The actress formerly known as Rachel Green has a bangin' bod in general that always seems to be perfectly tanned, but those shoulders are of another world. Enchanting. Mesmerizing. We're lucky she usually struts 'em on the red carpet.

Along with her costars Courtney Cox and Lisa Kudrow, Aniston was earning one million dollars per episode in the last season of Friends. A decade later, she's still the third highest paid actress in Hollywood. No small potatoes in Hollywood, where female actresses are still underpaid compared to their male colleagues. Girl girl, get that cash.

Aniston's Claire in Cake is notoriously "haggard," a rude word for "not made up to the nines." She said in an interview about the role that it was "liberating and empowering" to go makeup-free for a role and to disappear inside the character. Reese Witherspoon could also be nominated in this category for getting down and dirty on the Pacific Crest Trail as Cheryl Strayed in Wild.

Related to her make-up free glee, Aniston also just let it all hang out in order to become Claire. She stopped working out in order to gain weight for the film. Sounds pretty chill. BUT! Let Aniston remind you, as she said in an interview, that it's a bunch of sexist nonsense to praise actresses for being brave just because they "ugly up" for a role.

Jennifer Aniston was GQ's FIRST Woman of the Year in 2005. Put that in your pipe and smoke it, boys.

Have you seen the roster of Aniston's current and past beaus? Have you seen Justin Theroux? Mad respect to the way she spits game.

Like so many other actresses in Hollywood, Aniston is constantly asked about her decision not to have children. She got straight up fed up with the third degree and spoke out about it, saying that as a woman just because you don't have children doesn't mean you've failed. "You may not have a child come out of your vagina, but that doesn’t mean you aren’t mothering — dogs, friends, friends’ children," she said. Yeah, you tell that sexist media what's up.