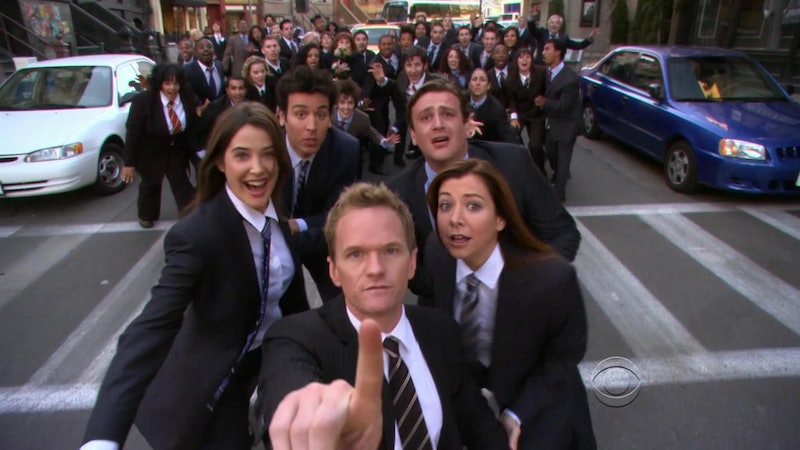 Like so many unsuspecting Netflix account holders, I was pressured by that one friend who was ahead of the How I Met Your Mother curve and forced me to sit down and watch it for the first time. I can't tell you much about what happened that semester—what my grades were, who I hung out with, whether or not I even remembered to put pants on before I left for class—but I can tell you about every trick Barney used in The Playbook, the evolution of the yellow umbrella, and the names of pretty much every guest star who made a cameo on the show's run. I may not have learned a lot in that semester of college, but I did learn this for certain: The How I Met Your Mother obsession is one that never goes away.

It is kind of the universe to soften the blow of the show's departure by putting Friends on Netflix, so my grief for the show ending is only mildly unbearable instead of cataclysmic. And as upset as I was about the way that they ended the show (particularly for Robin), I can't help but go back to the good ole HIMYM days in my mind, back when I had reruns on Netflix and an open box of Cheez-Its and not a care in the world. I'll probably never be over it, for the same reasons most of us never will be:

It made you hate Monday just a little less

I don't hate Mondays the way Garfield hates Mondays—I loathe Monday with the burning fiery passion that Sauron hates Frodo. But because of How I Met Your Mother, there was a glimmer of hope at the end of the nine-to-five tunnel, and even now I feel the echo of that past happiness that makes me give Monday some allowance for being the worst.

It taught you the importance of the high-five

I used to be casual about high-five giving, but now after watching enough HIMYM I have learned not to forsake them. I now recognize that it isn't just a gesture, but a display of mutual understanding and respect that only a high-five can convey. My high-fives aren't lame and half-assed anymore. I give them the 100% effort they deserve.

Yes, we already had Friends for that, but their phones had CORDS in them and they wore so much denim they probably could have built a bomb shelter out of it. Roll your eyes all you want, but the HIMYM gang was the Friends of the generation that squeaked in just after them, and although their problems were very much the same at the root, it was somehow comforting to see people texting on smart phones and running around post-millennium New York while they handled them.

Lily and Marshall gave you #RelationshipGoals (and maybe wrecked you forever)

Even in the brief period that they weren't together, there was no doubt in everyone's minds that they were soul mates. More importantly, though, you could see that as wonderful and destined as their relationship was, it was also flawed—and that even the "perfect marriage" had its dramatic ups and downs. HIMYM did a wonderful job of portraying a realistic and modern version of a healthy relationship. I mean, they also screwed us all over royally because the odds of us finding the Marshmallow to our Lily Pad are probably slim.

Robin makes us all feel less apologetic about being ambitious

Robin Scherbatsky was fearless, and basically never heard the word "no." She was an inspiration not just to women, but 20-somethings everywhere. She had just as many setbacks as she had successes and we watched her sometimes excruciating climb up the career ladder every step of the way, knowing that we were every bit as capable ourselves.

But you will never stop being mad about Robin

Part of the reason why I was so mad about Robin's fate at the end of HIMYM was that after eight years of writing her as an independent, ambitious woman who blazes her way to her dream career, they punished her for it by making it look like the choice had left her unhappy in the end. I choose to ignore that part of the finale the way I choose to ignore a lot of things about the finale, because otherwise it would taint the near decade that we were all looking up to her.

You genuinely rooted for the characters

You still see yourself in them

Don't even tell me right now that you haven't either taken a "Which How I Met Your Mother Character" quiz or that someone hasn't been like, "HA, you're so the Robin of the group" before. The flaws and strengths of the characters were so relatable that you couldn't help but see yourself reflected in them, which is probably why we were so stalker-obsessed with this show down to the very last episode.

ALL OF OUR FRIENDS watched it

There was a brief period between 2013 and 2014 when awkward first dates almost became extinct, because most humans had extensive HIMYM knowledge, which is probably enough to keep a conversation going for the length of most successful marriages.

It wasn't just the gut-busting jokes that the characters would casually deliver and slay you on a weekly basis—some of the best jokes on that show were quite literally set up EIGHT YEARS in advance. I cannot put sufficient words to describe those occasional ~mind blown~ moments that the writers threw at us, and the care and detail that they put into every almost-encounter with the mother was absurdly addictive. I laugh out loud spontaneously about their old jokes so often I shouldn't be allowed to leave the house.

Ted showed us that there's no reason to rush

I have been single for over three years, but like many single people of the world, I have this daily mantra that puts everything into perspective: "At least I'm not Ted." Seriously, though, seeing that someone can go through all that before they settle down with someone has helped everyone keep their chill about flying solo in their twenties. Good things will come to those who wait.

In the beginning, it seemed like Barney would only play comic relief, but when his character dealt with darker and more personal issues, it only added to his comic edge because there was a depth brought to him that I don't think anyone could have anticipated, or any actor could have portrayed so well.

Don't get me wrong. I love that Barney had a daughter in the finale, but I hated that they had to make him regress to this caricature of his former self first so that it could look more dramatically like fatherhood had flipped a switch in his brain. Fatherhood changes good men too, and by then, Barney was a good man. I think we all have a lingering sense that we were cheated when they pulled the rug out from under his character development, although I will never stop bawling every time I think about NPH talking to that baby for the first time, please excuse me, I HAVE TO GO.

The magic of HIMYM is that even the most extraordinary and unbelievable things that happened on the show were things that could be happening in real life, right under our noses, without us knowing it. There is no way of really knowing what tiny decisions ultimately lead you to where you are in your life, or how many times something almost happened before it did. HIMYM showed us that there is beauty in randomness and chaos, and that even when our lives are at their absolute bleakest, we never know when something wonderful is waiting just around the corner.

Your heart will be forever broken by Tracy

I have had so many alternating turns of hatred/begrudging respect for the ending of this show. I understand that the mother's death was realistic, and that's the point they were trying to make: We have no control over what happens in our lives, and ultimately have to make the best of what beauty we find in it, no matter how long it lasts.

But at the same time I am furious, because it wasn't just Ted who fell in love with her. We all did. And the ending was just so final, so resolute, that we couldn't even find any relief in trying to fanfic her back to life. As much as we love the reruns, I'm guessing the finale is one we might all just conveniently skip over in years to come, because our hearts still can't take it.

It helped you realize that you don't have a lot of control over what happens to you, so you shouldn't take anything for granted

It's easy to get mad at the writers for the ending, because in this case they were the ones who controlled the mother's fate, but what about when it happens in the real world and there are no writers to get mad at? I know a lot of us immediately reacted to the ending with, "What was the point?", referencing the eight years of build-up to Tracy's death. But when you think about it happening in real life, the point is pretty clear. If you found your soulmate, wouldn't you want to spend as much time with them as you could, regardless of what was going to happen? You never know what life has in store for you the way we had no idea that the writers had been plotting to kill Tracy all along. Even if it infuriated everyone, it served as a reminder for us to seize the moments we do have with people we love (hopefully by forcing them to marathon HIMYM with us on the couch).

You can't help but wonder where they are now

Like... does it work out with Ted and Robin after all that? Does Barney's little girl grow up to be the flirty female version of him? Did somebody ever have the presence of mind to burn that whale costume that Lily wore in the flash forward of the season finale so that nobody would ever have to see it again? So many hours of my life have been consumed by this that I feel like we all need to write it ourselves.

Among the things I will never forgive the writers for is brushing aside the greatest performance of the show's eight-year run: the mysterious pineapple. Yes, they have divulged details about it since, but too little, too late. AFTER EVERYTHING SHE GAVE, SHE DESERVED HER MOMENT IN THE SUN.