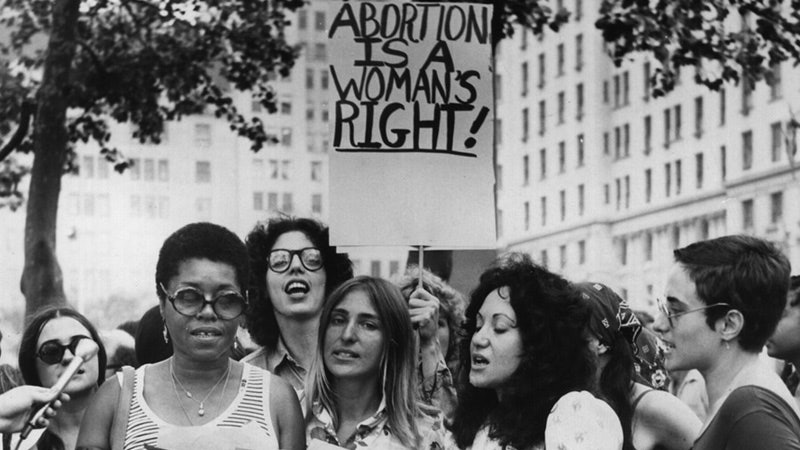 Jan. 22, 2015 marks the 42nd anniversary of Roe v. Wade. It was a landmark case, as they say, and perhaps the most important one in the American history of women’s rights. But although Roe v. Wade was definitely a game-changer, a woman's right to have free reign over her body is still very much at risk — as proven by a devastating vote by the House to Thursday to pass a bill to cut federal funds that cover abortion. Roe v. Wade is always an anniversary worth commemorating, but it feels especially relevant that we honor it this year.

In the 42 years since Roe v. Wade, there have been setbacks, but there have also been victories, too: The U.N. has declared abortion a human right, and two abortion clinics in Mississippi and Ohio were recently granted the right to stay open after a legal battle.

As someone who exercised her right to obtain an abortion for an unwanted pregnancy, I’m continuously grateful for the decision that was made that day in January of 1973, and hope that no matter who finds themselves in the seats of making legislature, women will always have safe access to abortion. It’s a right for which we all need to fight.

Although we all know what Roe v. Wade means in regards to abortion, you might not know some of the particulars about the case or what the aftermath meant to even the most liberal of U.S. Supreme Court Justices.

Here are 10 things you should know about Roe v. Wade on its anniversary.

1. Before Roe v. Wade, Abortion Had Been Considered A Crime For Over 100 Years

In 1821, Connecticut became the first state to make abortion a criminal offense by outlawing the use of any chemicals that would induce a miscarriage. The law was eventually to blame for the high rate of maternal death during the Great Depression, as women, unable to provide for their children, opted for illegal abortions. In 1931, illegal abortions were responsible for 14 percent of maternal mortality.

Norma Leah McCorvey, aka "Jane Roe," was 21 when she became pregnant for the third time (the other two children were given up for adoption). Desperate to get out of her situation, she went looking for an abortion. Hoping to obtain a legal one, she lied and said she’d been raped, because in Texas, that was the only way to get an abortion at the time. Because there wasn't enough evidence proving that she had been raped, McCorvey was put in touch with attorneys Linda Coffee and Sarah Weddington. The two women were searching for women who were trying to obtain abortion as a means to start their fight to get abortion legalized.

3. McCorvey Never Actually Had An Abortion

It took over three years before a decision came from Roe v. Wade. During that time, McCorvey, despite being the woman in the case, never once attended a trial and ended up having the baby. Again, McCorvey put the baby up for adoption.

When attorneys Linda Coffee (best last name ever, by the way) and Sarah Weddington set out to sue district attorney of Dallas Henry B. Wade, on Roe’s behalf, they were up against three male lawyers. Their names were John Tolle, Jay Floyd, and Robert Flowers. They also presented to an all-male Supreme Court.

Just to give you an idea of what the women were up against, attorney Jay Floyd, during his opening argument said, "Mr. Chief Justice and may it please the Court. It’s an old joke, but when a man argues against two beautiful ladies like this, they are going to have the last word."

No one laughed, and it’s since been regarded as the Worst Joke in Legal History.

6. Originally, The Justices Were In Unanimous Support Of Ending All Restrictions On Abortion

But that was only after the first round of arguments, and two of the other deciding justices, William Rehnquist and Lewis Powell, had not yet been appointed. In the end, Rehnquist and Byron White dissented.

Although the case won the majority rule in favor of Roe, giving women the right to get abortions within the first three months of their pregnancy, the Supreme Court still had its work cut out for them. After the decision, SCOTUS had to work on consent issues, both parental and spousal, as well as struggling with appropriate waiting periods for women hoping to get an abortion.

As Pew Research points out, "In these early cases, the high court generally struck down most laws regulating abortion and upheld only a few that, in the court’s view, did not significantly limit a woman’s right to terminate her pregnancy."

Basically, it was a trial and error process.

According to Ginsberg, the case of Roe v. Wade “moved too far, too fast” and failed to make a legitimate case for women’s equality. As she explained in 2012, “If you read the decision [in Roe], it’s as much about the doctor’s right to recommend to his patient what he thinks his patient needs. It’s always about the woman in consultation with her physician and not the woman standing alone in that case.”

9. McCorvey Has Tried To Have Roe v. Wade Overturned

In 2003, after converting to Christianity, McCorvey filed a motion to have Roe v. Wade overturned, citing that "abortion hurts women." The following year, the motion was dismissed.

Since then, McCorvey has become a vocal pro-lifer, and thanks Christianity for not only showing her the way, but curing her of her homosexuality, although at the time she continued to live with her partner, Connie Gonzales.

Meanwhile, the struggle to keep Roe v. Wade intact continues. Even today, on the anniversary of the 1973 decision, the House was set to vote on a bill (presented by the GOP, of course) that would ban the use of tax dollars for abortion ― it was passed this afternoon. And while Congress is hard at work inside, outside the annual March for Life will rally at the National Mall voicing their opposition to Roe v. Wade.

Roe v. Wade may always be under attack, but as long as we're willing to fight those who oppose it, we'll hopefully manage to succeed in keeping a women's right to choose alive.