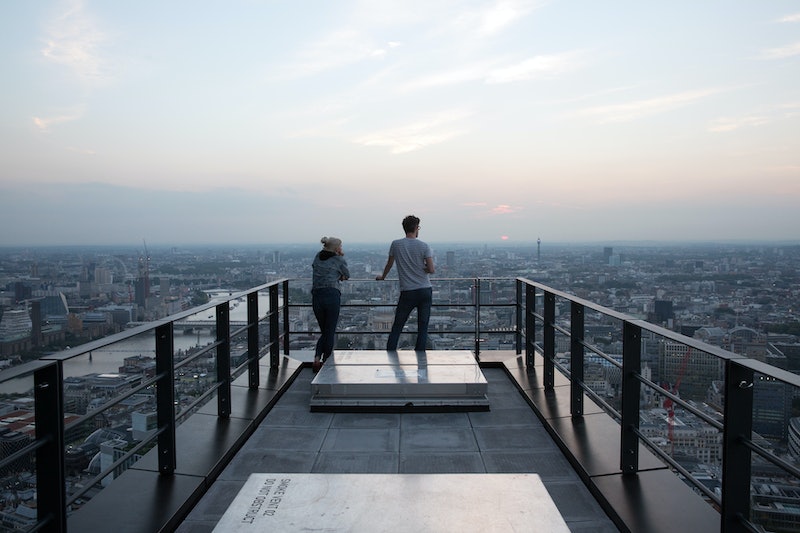 More couples than ever are redefining what commitment means to them: According to the 2010 U.S. Census, 45 percent of households are made of unmarried, long-term couples. The Center for Disease Control has also found that these people who once upon a time would have been regarded as “living in sin” are also starting families. More and more, people are skipping the whole “until death do us part” thing and have decided that a long-term commitment without the marriage certificate is the best route for them.

But before you can get to the stage where you’re thinking about moving in together and having a family, you need to first decide whether you want to make a commitment to each other and the relationship.

Commitment is different for everyone, but is always about a level of dedication that's mutually agreed upon. While monogamy seems like a big part of that, you can be committed without being in a monogamous relationship. What commitment is really about is support, communication, compromise, and planning for the future together. It's something you both need to confirm that you’re willing to put in the necessary effort for, instead of just holding your breath and hoping for the best. Although you may not be walking down the aisle any time soon (or ever, if that’s your thing), you likely still find you want to talk about commitment eventually.

But how do you even begin that talk without making your partner feel weird, or implying you want to settle down right this minute? If you’re in a relationship and want to make it too legit to quit, then here’s how you’re going to go about opening up a conversation about commitment with your partner.

I'm no expert, but having had that talk with my long-term partner I know, from experience, that it can be done. Here's what worked for us.

1. Think About Whether Commitment Is Something You Actually Want

It's important to take a look at what you want, both as a couple and as individuals. You need to ask yourself not just if commitment is something you want collectively, but if this is something you want individually. It might sound selfish, but before you can move forward you both need to, as my therapist would say, "sit with it." Really hone in on whether or not you can see yourself with this person long-term.

Do you want this person to be the first person you see every morning and last person you see every night? Can you imagine growing old with them and supporting them emotionally, mentally, and maybe even physically at some point? Do you respect each other and value each other's thoughts, opinions, and quirks enough to work through whatever messy stuff might come your way? Of course, you can't know everything in advance, but you can see how these kinds of questions sit with you.

2. Plan To Have ‘The Talk’ In Advance

When my partner and I had "the talk," we specifically set aside an evening for it. Over wine we expressed out concerns, fears, and issues with commitment, because we both had (and have) them. We accepted the fact that we were both scared, that we might mess up, and that neither one of us, in our past, had been saints. But we made a pledge, as much as that word sort of irks me, to give it our all and never skimp on our commitment, as we had been guilty of doing in our past relationships.

For us, that meant being dedicated to each other and devoted to the life of our relationship. It meant sticking it out despite the distance our relationship often faces, immediately addressing concerns before they have time to become issues, and never forgetting that we are equal in this partnership.

For others, commitment could also mean attending each other's family gatherings without a fuss, meeting up for lunch at least once during the work week, or agreeing to couple's therapy if there's a rough patch. The point is, you define what it means for you.

3. Make Sure You’re Both On The Same Page

Talk with your partner about what you want in life — long-term. Make sure you're both in agreement about the big stuff like whether or not to have kids, and the little stuff like how you would want chores divided up in a household.

This isn't to say that you're not allowed to change your mind, but the hope is that, even if there are caveats and footnotes, you'll still be on the same page in five years.

Admit that yes, you suck at keeping up with the dishes — and let your partner admit that in their ideal world, you two would sleep in separate beds. No matter what the topic, just put it all out there.

My partner is well aware that I can only cuddle so long before I have to roll away — and I'm cognizant of the fact that he will never, ever be on time for anything. But because we put all our cards on the table, we went into our commitment knowing what to expect.

5. Fantasize About The Future Together

Even if you aren't sure you'll be together forever, you can still see if what you want for the future aligns.

When my partner and I had our talk, we really focused on the future: Where did we see ourselves in five years, both professionally, individually, and as a couple? Would we own a home by then, or still be renting? What were our goals for us, as a partnership, and ourselves?

I told him in five years, I'd like to have written a couple books and live on a farm in New Hampshire or in a village outside Paris. He told me he wanted to evolve in his music career, try other genres, and would be happy to live in either New Hampshire or France. We looked at our relationship from all angles and understood, as an equal partnership, we would have to make room for each others' goals and dreams. And since we're both artists, there's a lot of dreaming going on between us.

That's how the talk worked for us — but it's all about finding your own way to open up the conversation.