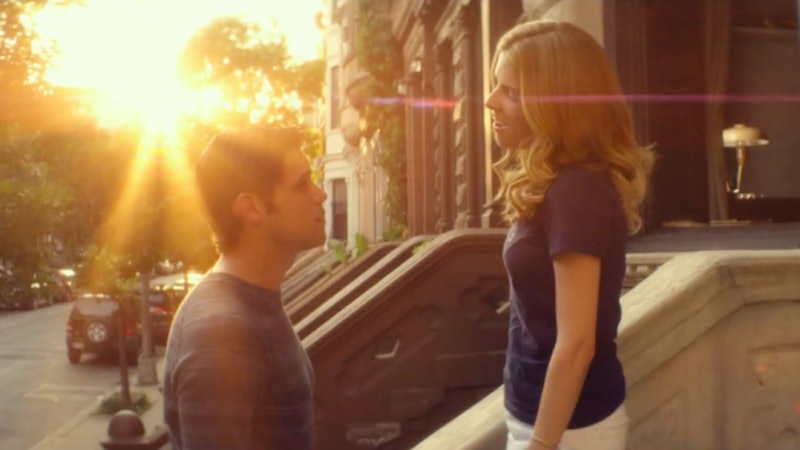 The list of people who have been emotionally destroyed by Jason Robert Brown's "The Last Five Years" has been steadily mounting since its debut in 2001, and now that the movie is about to be released on Valentine's Day, the number is going to rise exponentially (as is stock in Kleenex, I'm guessing). In fact, if the streets aren't flooded with tears after the premier, I'll be shocked. Even though everyone already knows most of the plot going into the movie (it is made clear in the first few seconds of the musical that the relationship between the two love interests is ultimately doomed), there is nothing that can prepare you for the savage ripping out of your heart even seemingly throwaway lines will cause. It's going to be an emotional bloodbath, you guys. NONE OF US IS PREPARED.

I wish I could say that being a super fan of the musical will somehow make me immune to publicly crying in theaters, but I'm afraid seeing it come to life on the big screen will only make it worse. My little sister starred as Cathy in her high school's production of it, and I bawled literally the whole time (right in the front row so I could appropriately SCAR HER FOR LIFE). To this day, I've never been able to sing through the soundtrack even though I know every damn word because I inevitably get choked up. (If you have ever been concerned about a frizzy-haired person crying while mouthing words to herself at a stoplight, we probably live near each other.)

That being said, of course I can't WAIT for Valentine's Day 2015 so everyone else who wanders into this movie can be full of impossible feels and make me feel less alone in my obsession. And the perk is that since the super fans have already been through many rounds of torment via the soundtrack, we'll be there to emotionally support the newbies. If you need to find one of us, we're pretty easy to spot. Here's a handy field guide:

We will be crying before we enter the theater

Casually. Unstoppably. Shamelessly. Please give us a wide berth.

The instant Jeremy Jordan's name and/or face pops up on the screen, we will squeal

Everyone already knows that Anna Kendrick is a kickass singer, but this is a huge career break for Jeremy Jordan, beloved lead from Broadway's Newsies adaptation. The fan base may be small but it runs deep.

We will be intermittently scoffing

Rough translation of scoff: "That's not how it was in the original show." *shoves non-prescription hipster glasses further up nose*

BLESS THESE VOCAL CHORDS. True fans were suspicious of anyone's abilities to do these two parts justice, but one look at that preview was all it took to settle our nerves and now we're painfully obsessed.

And be irrationally upset if it deviates in any way in the film version because WE WERE ON A ROLL, DAMMIT.

Aka, "How to emotionally compromise anyone with a heart in six minutes or less!"

Please, for your own safety, bring some rubber-soled shoes.

Oh, sorry, did you want to hear that quippy one-liner and the entirety of "Summer in Ohio"? Our bad.

Occasionally we will just mutter the words "No"

Remember how The Fault In Our Stars was a total hot mess and a half in theaters because everyone read the book ahead of time? This will be a much quieter, less dramatic, but somehow more excruciating slow burn for people who already know what is going to happen.

We will possibly start snoring during "The Schmuel Song"

Everyone else will be waiting for them to get to the goddamn point, but the fans know that it will take them a freaking century. I'm genuinely curious what they will do to make this enticing, but that curiosity will expire in about 30 seconds if they're just straight up singing the longest and arguably most pointless song on the planet. Even Jeremy Jordan's face can't make that song interesting. Eh, at least it will give us one quick break to hydrate from all the streams of our tears.

Remember that time "Goodbye 'Til Tomorrow" wrecked every first date you'll ever have until the end of time? WE DO.

When someone asks, "But what ever happened to Cathy?", we will just shake our heads

The most unbearable factor in this musical: it's autobiographical. We know what happens to the guy in it because we can look him up. He is happily remarried with kids. And although it isn't that hard to find the real-life Cathy's name on the internet, it is impossible to stalk her online. We have lived with the knowledge that we will probably never have this cleared up, even though her happiness has become more crucial than our own. But at least we'll be able to nip the fruitless stalking urge in the bud for newbie fans right off the bat.

When the lights go up, the light in our eyes will be GONE

And we will proceed to the nearest exit with all of a gusto of a fully-decayed zombie, leaning on the closest available human for support. Everyone else will still be in their "shock" phase; we will skip right to the part where we are dead inside. ARE YOU HAPPY NOW, JASON ROBERT BROWN?!?!?