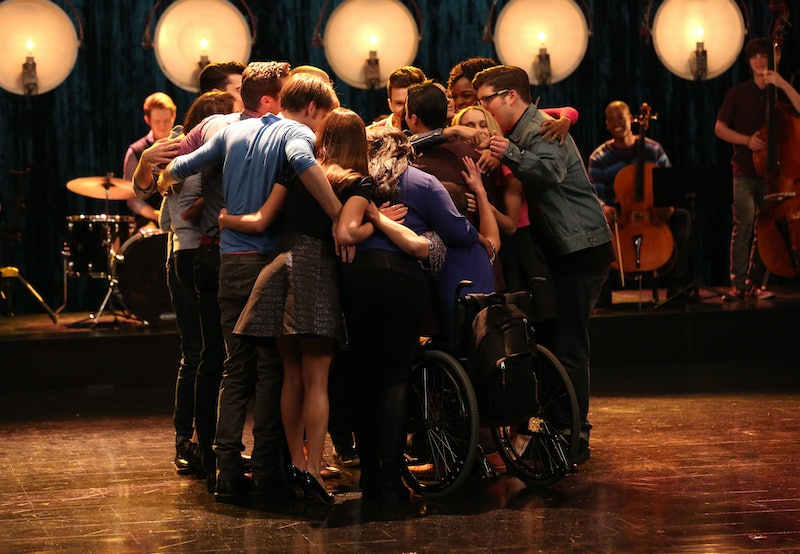 Things are going full circle on Season 6 of Glee. After spending the final half of Season 5 hanging out with the McKinley High gang in New York City, the former New Directions have returned to Lima for one last round of show choir competitions. Rachel, Kurt, Blaine, and Mr. Schuester are all directed groups of their own this year with fresh-faced talents, and former New Directions members like Santana, Quinn, Puck, Mercedes and Tina are back to give their own assistance to the new McKinley group — which, so far, consists of only four members. But before there were these Season 6 hopefuls, Glee introduced us to a new crop of New Directions back in Season 4 of the series — students that show appears to have nearly forgotten about entirely. So are Marley, Jake, Unique, Ryder, or Kitty going to get some attention on the Glee series finale? It's possible — but don't get your hopes up just yet.

If you tuned into the second episode of Glee's sixth season "Homecoming," then you already know that one of the new "New Directions" (not to be confused with the newest New Directions) made an appearance. Kitty showed up in full Cheerios garb to give Artie a piece of her mind — it turns out that she wasn't thrilled about him ditching her for college after the New Directions lost at regionals. Artie leaving Kitty without so much as a phone call seems to have returned Kitty to her previous mean girl status — she's back to being the head bitch on the Cheerios and has zero interest in making sweet music with the newest New Directions.

Kitty also revealed something big about the fate of her former Glee club friends — they're no longer McKinley students. That's right: Marley, Ryder, Jake and Unique were all transferred out of McKinley by Sue Sylvester, who was probably terrified that they'd start a musical rebellion in her math-and-sports-obsessed high school. (I hate to say it, but she's actually right — they would have.) It's a convenient way for Glee to write off these characters, if not also the absolute laziest.

But if you're dying to know what happened to these former Glee clubbers, there's a small chance that we will catch up with them. Back in April of 2014, showrunner Ryan Murphy talked to TVLine about how he does want to catch up with the new New Directions again before the Glee finale:

At some point before the show is concluded, we will definitely catch up with those characters again. We really loved all of those actors, and they did a great service to the show. So I think at some point, before we’re done, we’ll see many of them again and find out where they are and check in with them and see how being a part of that glee club legacy affected their lives, as we do with our original characters.

So will Murphy hold up his end of the bargain? I'm hopeful — though it's unclear to what extent we'll see these guys before the show closes curtain for good. (After all, this is the guy who promised the triumphant return of Twisty the Clown on American Horror Story only to have the character onscreen for 30 seconds in the finale.) My best bet? Murphy will show the other students competing with Vocal Adrenaline, the New Directions, and the Warblers at a show choir competition. That certainly wouldn't be the worst fate for these guys — they had powerhouse voices and it would be fun to see them do one final number together.

So how about it, Murphy? Think we can make room in an already overstuffed cast for a few more students? Or, like Sue, are you fine shipping them off to other shows? We've got only a handful of episodes left before we'll know for sure.