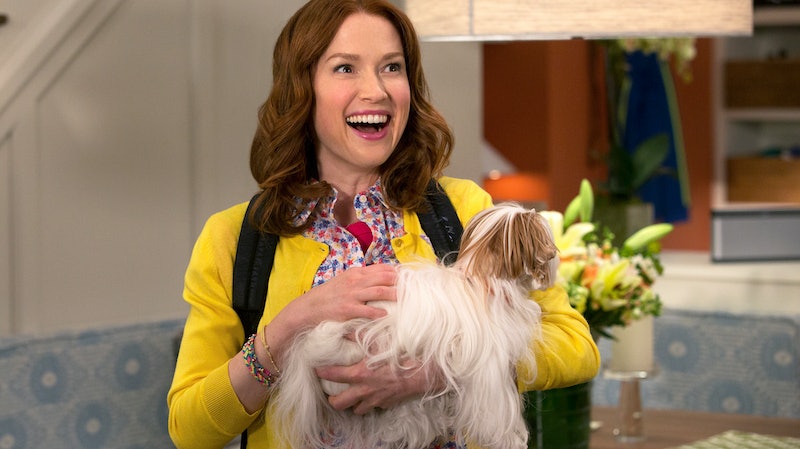 Despite the multitudes of vitriol that I carry for the word and its use in any context, I really cannot deny its insuperable propriety in describing one comic actress Ellie Kemper: She is, indubitably, adorbs. That’s Kemper’s shtick in a nutshell — adorability — as purveyed by her roles in Bridesmaids, 21 Jump Street, The Office, and perhaps her newest show, Unbreakable Kimmy Schmidt. Anyone who's seen her projects definitely knows it well: Her roles are endearingly merry, treading just deep enough into childlike whimsy to allow for a doting preciousness over her every deed — but, all without going so far as to sacrifice her god-given crushability.

And it works. In her diminutive feature film appearances, her mid-series ascent to focal stardom on The Office, and the trailer for her latest venture — the Tina Fey–produced Netflix sitcom Unbreakable Kimmy Schmidt — Kemper’s wide-eyed racket has proven itself a winning ordeal. As the image of impeccable sweetness, unfettered positivity, and impossible purity, Kemper has been a real joy to watch and a habitual riot to boot.

But what exactly is it that we’re laughing at, rooting for, crushing on, and endorsing in Kemper’s routine? Can that impeccable sweetness be condemned as the tireless patience and toleration you’d find between the margins of the oppressive “girl next door” archetype? And that oh so impossible purity — is it too much to call this characteristic representative of a degree of infantilization that’s reductive, chauvinistic, and even a little perverse?

Consider Kemper’s entry into the Office universe: Her character Erin Hannon was ushered in to usurp the vacancy of soft-spoken wallflower after Pam’s eventual graduation to personal empowerment — meant to be the veritable dream girl to hapless everyman Andy. All the while, maximized screen time notwithstanding, she exhibits the same lack of guile, intellect, and self-sufficiency to keep up the mirage of a romanticized suspended preadolescence.

When you look at her as an individual character actor, Kemper might not seem like any cause for concern. But it’s tough not to consider a spiritually similar routine that befell actors like Gary Coleman and Emmauel Lewis in the 1980s: a demotion of their characters, and by the extension the media’s understanding of black American males, to perpetual infancy and ultimate subjugation.

Sadly, Kemper's characters, in and beyond The Office, occasionally fall into this trap. In them, we see the reduction of an adult woman with enough natural charm and personal acumen to gain favor and command down to a state of infancy and subjugation. In them, we see Kemper related to a position that's heavy with affability, but too often free of agency.

And this inarguable likability is why it’s so difficult to castigate Kemper’s characters for such a problematic cause. We like Kemper. We root for her, we laugh with her. But most of all, we feel bad condemning her. We don’t think that Erin Hannon can take it. We don’t find good cause to believe that she’s strong enough to withstand this kind of adversity. And that’s not the way we should want to feel about our female leads.

Kemper and Fey’s Unbreakable Kimmy Schmidt has yet to reveal its angles in earnest; we could be looking at an ascension of Kemper from the stronghold of puerile lovability to genuine heroism. We can only hope for a step in this direction — devolution to an endearing plateau of arrested development is hardly the only reason we’ve liked Kemper thus far; she’s way too talented a comic to cement in such limiting material for four seasons of comedy television. Luckily, with notorious feminist Fey at the helm, that shouldn't be a cause for concern.